Nearly 10 years in, a mars rover starts yet another mission

MARTIAN TERRAIN
[+]Enlarge
Credit: NASA/JPL-Caltech/Cornell U./Arizona St. U.
Solander Point (shown in false color) is Opportunity’s next destination; the rover will recharge for the winter and study the area’s exposed rock layers. 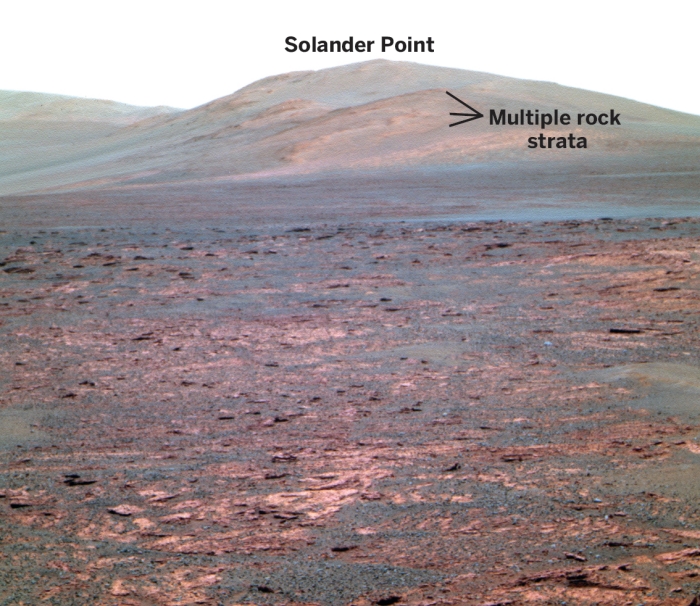 Credit: NASA/JPL-Caltech/Cornell U./Arizona St. U.
Solander Point (shown in false color) is Opportunity’s next destination; the rover will recharge for the winter and study the area’s exposed rock layers.

It’s now been a decade since the National Aeronautics & Space Administration launched Opportunity from Earth in July 2003, and the rover is still going. Since landing on Mars in early 2004, Opportunity and its now-deceased twin, Spirit, have discovered multiple lines of evidence that water once existed on the martian surface. And researchers today are as excited as ever about Opportunity’s potential to deliver more insights into the Red Planet’s geology, chemistry, climate, and habitability.

Since 2011, Opportunity has explored and studied the 4 billion-year-old Endeavour Crater, which exposes what scientists believe are some of the oldest rocks the vehicle has yet encountered. The rover is now on its way to a new destination in the crater with a large exposed rock stack whose layers preserve geological and climatological details of the martian past. Mission investigators hope analyzing those rock strata, in the area known as Solander Point, could help them better understand martian geology and climate.

“We have a new mission all over again,” says John L. Callas, Opportunity project manager at NASA’s Jet Propulsion Laboratory (JPL) in Pasadena, Calif. “But we also realize that this rover is not going to last forever.”

Opportunity is fresh off discovering evidence that water not only flowed on the surface but billions of years ago may have had the right acidity to help form chemicals that serve as precursors to life, mission investigators say. The rover made that discovery by analyzing a rock in Endeavour Crater with the help of its α-particle X-ray spectrometer.

The analysis of the rock, which investigators call Esperance, revealed that its composition mirrors that of clay minerals that form in waters at neutral or higher pH on Earth. Water, perhaps at a drinkable pH, may have flowed through fractures in the rock and altered it to produce the clay-mineral composition, says principal investigator Steven W. Squyres of Cornell University.

It’s not the first evidence scientists have found for neutral-pH water on Mars, but it’s by far the most compelling Opportunity has discovered, Squyres explains. In addition to indirect measurements from orbiters, the Curiosity rover, which recently joined Opportunity on Mars, has also found clay minerals suggestive of neutral-pH water. And Spirit previously discovered magnesium and iron carbonates, which Squyres says are difficult to produce in acidic conditions.

Those pH findings also suggest that water on Mars became more acidic over time, the researchers say. Most water evidence in the plain Opportunity has explored involves relatively young rocks rich in sulfates, suggestive of water that contained sulfuric acid. By contrast, the researchers say, Esperance—which is probably far older than most other rocks there, perhaps predating the crater itself—is less rich in sulfates.

The martian winter is nearing in the planet’s southern hemisphere, where Opportunity is located. But because Solander Point, which the rover may reach as early as August, harbors elevated, angled ground, Opportunity’s solar panels will get enough energy from the sun to keep it running through the coming season.

The exposed rock stack there that scientists want the rover to analyze is tens of meters high, far taller than previously encountered martian stacks, and it may have been uplifted during the impact event that formed Endeavour. Not only could analyzing the rock at Solander help researchers better understand the Esperance findings, but it also could help them more precisely and thoroughly characterize the historical geology and environment of Mars, says deputy principal investigator Raymond E. Arvidson of Washington University in St. Louis.

But having traveled far and endured years of hostile conditions and temperature changes on the martian surface, Opportunity is showing signs of age. Its legs have robotic arthritis. The risk of a major equipment or electronics failure has risen, and there’s no way to predict when one might occur. “So each day is a gift,” Callas says.

As long as Opportunity lives on, scientists say, they will keep putting it to work. It has exceeded expectations, explains Bethany L. Ehlmann, a California Institute of Technology and JPL planetary scientist who has worked on the Opportunity, Spirit, and Curiosity missions.

Beyond making discoveries of the planet’s geology, Opportunity has also amassed 10 years’ worth of weather and atmospheric observations—useful for future mission planning, she notes. And it has given scientists and engineers invaluable experience operating rovers and helped them fully realize just how powerful these tools can be for science. “The scientific ‘bang for the buck’ has been outstanding,” Ehlmann says.