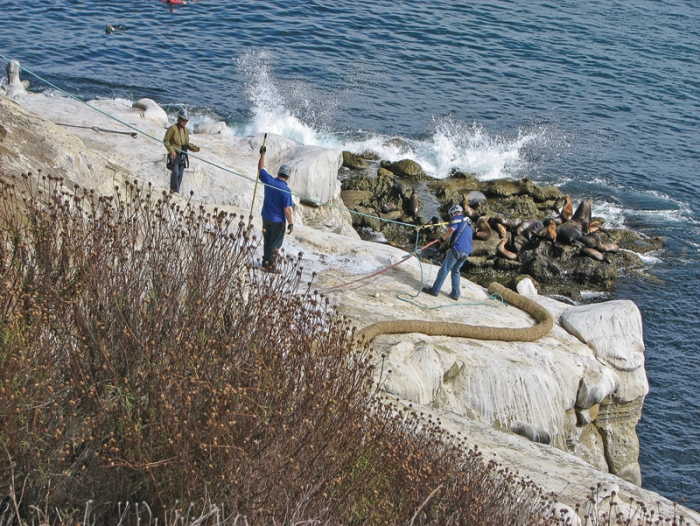 “Putrid,” “noxious,” and “odor of decaying fish.” These aren’t descriptors the Newscripts gang would normally use to characterize a picturesque bit of coast near San Diego. But that’s the reputation La Jolla Cove has gotten in the past couple of years.

After the city banned people from walking on cove rocks, birds took over. Increasing numbers of birds led to increasing amounts of bird poop coating the cove’s rocks.

The stench got so bad that San Diego Mayor Bob Filner issued an emergency finding in May under the Marine Mammal Protection Act of 1972, declaring that “the accumulation of bird waste is a public health hazard,” according to a city press release.

The finding paved the way for San Diego to bring in Blue Eagle Distribution in June to treat the bird droppings with a bacterial solution. The mixture is one that the company has already used to treat oil and grease waste from restaurants, sewage, and residual waste in dumpsters, says company co-owner Lance Rodgers.

It contains five species of Bacillus bacteria, a surfactant derived from coconut palm trees, and a biodegradable acrylic polymer used as a thickener. Rodgers’ team applied the solution as a foam to help the bacteria munch on the waste as long as possible and to minimize runoff into the ocean, Rodgers says.

From all reports, the bacteria worked beautifully at removing the waste and reducing the stench from the areas treated. The Blue Eagle crew will return after nesting season to finish the job.

And if there’s a bird poop problem in your area, you may see the bacterial foam soon: According to Rodgers, other cities and even one state park have called Blue Eagle to inquire about its approach.

San Diego’s après-bird cleanup effort won more accolades than this summer’s movie season, in which several high-budget movies flopped. “Star Trek Into Darkness” seems to be holding its own, however, having grossed more than $225 million since its May 16 opening. 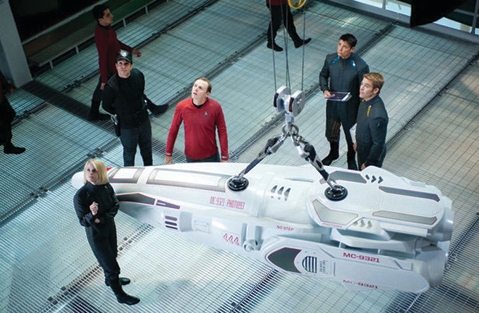 “Into Darkness” is also notable for another reason: Parts of it were filmed at the National Ignition Facility (NIF) of Lawrence Livermore National Laboratory (LLNL). There, 192 high-power lasers converge on a pencil-eraser-sized pellet to enable the study of nuclear reactions involved in fusion energy and weapons. In the movie, the engine room of the fictitious USS Enterprise is the area outside NIF’s reaction chamber, says Valerie Roberts, who describes her job as “chief operating officer” of NIF. Parts of NIF also appear as another ship, the USS Vengeance.

The filming of “Into Darkness” at NIF came to pass after Paramount Pictures scouts found images of the facility online and contacted LLNL. Only when NIF was shut down as part of routine maintenance could the film crew do its work, however.

Although parts of LLNL appeared in the 1982 movie “Tron,” that was a long time ago, Roberts says. With “Into Darkness,” “we didn’t know quite how it was going to go,” she adds.

On-site, crew members were respectful of the facility, Roberts says. They stayed in designated areas and willingly worked with NIF staff to place or hang equipment. The “Into Darkness” team worked at NIF for about two-and-a-half weeks, including setup, roughly eight days of actual filming, and teardown.

Overall, being involved in the filming was “really neat,” Roberts says. Aside from her interactions with the film crew, she also enjoyed seeing the professionalism of the actors when they were working and their casual sides when not. She adds, “It’s an experience that I don’t get every day.”