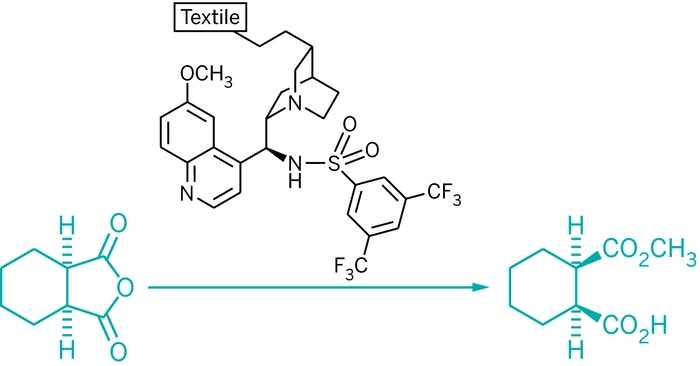 Organocatalysts have become fashionable in chemistry circles during the past decade. Now, chemists are taking a cue from fashion by immobilizing these small, nonmetallic organic catalysts onto fabric (Science 2013, DOI: 10.1126/science.1242196). The new organotextile catalysts offer a general, inexpensive, and practical approach to solid-supported organocatalysis, which aids catalyst recycling and could find use in the manufacture of pharmaceuticals and fine chemicals.

“The difficulty with any catalyst that is not supported on a heterogeneous material is that the recovery from homogenous phase requires an additional operation,” explains Benjamin List, of Germany’s Max Planck Institute for Coal Research, who spearheaded the organotextile research. Heterogeneous catalysts can be easily recovered by filtration, for example.

“One inherent advantage of organocatalysts, as compared to enzymes or metal-based catalysts, is that they can be easily and covalently attached to solid supports,” List adds. Chemists realized this advantage early on, he says, but so far the catalytic activity, selectivity, and recyclability of solid-supported organocatalysts have been inferior to those of homogeneous ones.

Researchers led by Klaus Opwis, of the German Textile Research Center, recently discovered a practical method for modifying textiles, such as nylon, with organic molecules simply by using ultraviolet light.

So List and Opwis teamed up to modify textiles with organocatalysts. To date they’ve made catalyst cloths modified with a Lewis base, a Brønsted acid, and a chiral organocatalyst. The textiles possess excellent stability, activity, and recyclability for various organic transformations. In one example, the researchers noted the high enantioselectivity was maintained for more than 250 cycles of asymmetric catalysis, an unusually high number of catalytic turnovers.

“What excited me most about this work was the incredibly high number of reaction cycles,” comments Franco Cozzi, an organocatalysis expert at the University of Milan, in Italy. “Generally, a supported organocatalyst after a few cycles is totally or at least partially inactivated, but this seems not to be the case in the present work.”