Humans have damaged all of Earth’s ecosystems; author argues that a new ethos toward nature is needed

Credit: Rudy Baum/C&EN
The mountain inspired Eric Brace to write a song with that title (http://cenm.ag/denali). At some 18,000 feet, the base-to-peak rise is considered the largest of any mountain situated entirely above sea level.

Humans’ relationship with nature has always been complex. A part of it, and apart from it. Situated in a semi-exalted realm that lies somewhere between beasts and gods.

It should be obvious that we are part of a continuum that links all of the creatures of Earth, but for much of our recorded history, we have insisted that we are somehow fundamentally different from all other living things. We are conscious. We are aware of our mortality. We weave creation myths.

We imagine that we have dominion over the rest of creation, and many of our religions reflect that belief. Especially over the past 200 years, as our technology has granted us almost godlike power to shape the natural world, we have abused that dominion and desecrated much of the planet. We humans are the direct cause of what has become known as the “sixth extinction,” the continuing massive loss of plant and animal species since the end of the last ice age 10,000 years ago and the dawn of human civilization.

“The Once and Future World: Nature As It Was, As It Is, As It Could Be” by J. B. MacKinnon is a meditation on the relationship between humans and the natural world. It is a deeply melancholy book, one that charts in relentless detail the toll humans have exacted on Earth. It posits that denial and self-delusion go hand in hand in abetting our continued destruction of anything resembling wilderness. And it offers a tentative and hesitant vision for reimagining our place in nature.

Although much of “The Once and Future World” charts the destruction humans have wrought, MacKinnon, an environmental journalist who lives in Vancouver, British Columbia, is primarily interested in how humans view nature. It is our deeply delusional relationship with nature, MacKinnon argues, that has permitted us to treat Earth and our fellow inhabitants of the planet with such disregard. 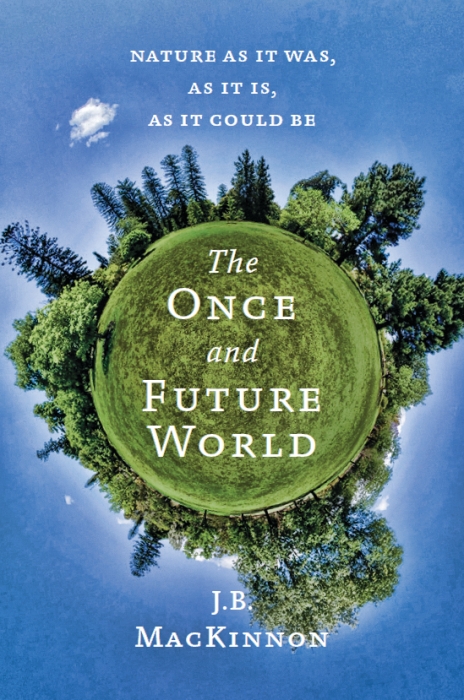 “We’re surrounded by a world that is, by our own description, ‘man-made’ and ‘artificial’; nature is what rises up at the edges of cities and towns, or wherever else it has not been beaten back by human hands,” he writes. “We often put the two—natural versus unnatural—in opposition, weighing whether or not to preserve the former or make way for the latter, all the while assuming we can distinguish one from the other. This is nature by our most ordinary definition: the sum total of everything that is not us and did not spring from our imaginations.”

To understand the world we exist in today, MacKinnon insists, one has to understand the world as it once existed. That, however, “isn’t as easy as it might sound,” he writes. As a result of “shifting baseline syndrome,” a concept originated by a fisheries scientist named Daniel Pauly, people accept a diminished environment as a new normal. “Memory conspires against nature,” MacKinnon writes. “The forgetting can begin in the instant that a change takes place: the human mind did not evolve to see its surroundings … as the focus of our attention, but rather as the backdrop against which more interesting things take place.”

As a result, we now live in and accept as normal what MacKinnon calls “a 10 percent world,” one that possesses only one-tenth of its former natural abundance. He cites statistics from around the world to make his case that species extinction and extirpation—the complete disappearance of a species from a given local area—is proceeding at an almost unprecedented rate (the five earlier mass extinctions in the fossil record were all almost certainly the result of natural catastrophes such as the comet impact 65 million years ago that wiped out the dinosaurs).

MacKinnon is adept at pushing his readers to shift their point of view on matters that may seem settled. In his opening chapter, for example, he writes of his boyhood in the dry country of the northwestern U.S. (he doesn’t specify the state, but it sounds like eastern Washington). For him, the iconic animal in that natural landscape was the red fox, and MacKinnon writes of the animal’s beauty and incredible physical traits. As an adult, he returns to the grasslands he wandered as a boy and finds them converted to a subdivision with no evidence of any remaining red foxes.

“When I began to look into the story of the foxes, I expected to uncover the usual sad chronicle of decline,” he writes. Instead, he learns that red foxes were introduced to North America by Europeans in the 1700s so they could continue their tradition of hunting foxes on horseback. The red fox, in fact, is an invasive species, one of the 100 most destructive in the world according to the Global Invasive Species Database.

Things are often not what they seem when we try to envision the historical natural world, MacKinnon maintains, and this distorts our view of our place in this current world. “Our baselines have shifted,” he writes. “But it’s one thing to recognize that amnesia, and another to say what the original baseline actually is.”

MacKinnon points to the Americas to illustrate his point that we often posit a baseline that isn’t accurate at all. It’s widely accepted, he points out, that European settlement of the Americas represented a fundamental shift in the natural balance of those continents. “It’s still widely believed that the European explorers made landfall on a wild landscape, in which the Native Americans were a part of the natural balance or at worst a minor disturber of its harmonies,” he writes, and then goes on to show that that wasn’t the case at all.

There’s not much to be positive about in “The Once and Future World.” A point MacKinnon drives home forcefully is that there is no going back. The natural world that exists today is the world humans have created. “The nature that we live with is a choice,” he writes. “No one, certainly no single generation, decided our trajectory from a richer to a poorer ecological world. Different arrangements of people have taken more or less from their environment in different places at different times, but as a general pattern each one gave itself limited permission to degrade nature as they knew it, then adapted to live with the consequences. It’s another maxim from historical ecology: we excuse, permit, adapt—and forget. We’ve been adrift as a species, making choices without remembering what our options are.”

Yet all is not lost. Conservation efforts have had some success in preventing species extinction and preserving ecosystems, MacKinnon concedes. And the philosophy behind conservation has evolved so that efforts are more holistic today than they were in the past.

“But conservation is not and has never been enough,” Mac­Kinnon contends. “The struggle to live with a wilder nature is sure to continue, but it won’t resemble conservationism as we’ve known it. It will be different enough that it only seems fair to call it by another name. Ours will be an age of rewilding.”

“Rewilding” is not an effort to restore nature as it once existed but to give a natural setting the opportunity to reestablish a new ecological balance, one that is healthier than the one that humans have created through their depredations. He points to an effort on the Galápagos Islands as an example. The islands were discovered in 1535, and over the next 300-plus years, humans butchered the giant tortoises from which the islands drew their name. The tortoises were finally protected in the 20th century, and through breeding programs and conservation efforts the tortoises are approaching 10% of their historical numbers. However, the lush subtropical forest in which the tortoises historically thrived did not return because of the presence of hundreds of thousands of goats on the islands. The tortoises could not compete with the goats.

“The islands required rewilding,” MacKinnon writes, thus begetting Project Isabela, named after the largest island in the Galápagos chain. The goal of the project was straightforward: to kill the goats. Sharpshooters in helicopters slaughtered the goats and left their carcasses to be eaten by scavengers and to rot.

“With goats no longer grazing, Isabela’s giant tortoises are once again megafauna, free to do what they did for thousands of millennia: browse foliage, eat and excrete seeds, churn soil,” MacKinnon writes. “Around them a new landscape, not the same as the one they knew five hundred years ago but surely familiar, right-seeming to a tortoise, is rising. The great beasts can once again take pleasure in a shady waterhole.”

MacKinnon points to other rewilding initiatives, including ones in the Canadian Rockies and on the island of Hawaii. The intention “is not to live in the past, but to end the war of the present against the past,” he writes.

MacKinnon is an evocative and thought-provoking writer. “The Once and Future World” is, in the end, a faintly hopeful book. MacKinnon believes that humans can change, can reimagine their relationship with the wild world in time to restore a healthy balance between us and the rest of creation. I hope he is right.

Science Communication
Animal lovers battle on social media and a newly named rock star
Environment
Failing As Stewards
Policy
Enlightened Thinking
Share X
To send an e-mail to multiple recipients, separate e-mail addresses with a comma, semicolon, or both.
Title: Humanity And Nature
Author: Rudy M. Baum
Chemical & Engineering News will not share your email address with any other person or company.