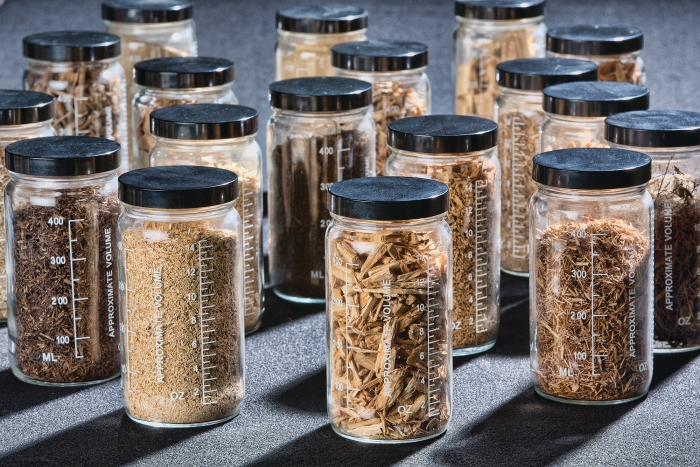 Credit: Ken Childress/KiOR
Pyrolysis can convert different kinds of biomass into a product that resembles petroleum.

As a biofuel, ethanol has drawbacks. Conventional engines and infrastructure can corrode when exposed to it. The alcohol can absorb water from the air, reducing its already low energy density and complicating combustion. And making it by fermentation consumes roughly half of the chemical energy available in its ideal starting material, glucose.

That’s why scientists and businesspeople are searching for other biofuels that are chemically similar enough to petroleum fuels that they can be used with existing engines and infrastructure without any modifications. One route to such “drop-in” fuels, biomass pyrolysis, is drawing a good deal of attention. Its use of a high-temperature, oxygen-free process has the potential to convert forestry and agricultural waste directly into gasoline, jet fuel, and diesel.

Vinod Khosla, a high-profile biofuels entrepreneur, is doubling down on pyrolysis. Khosla is a founding investor in KiOR, the most advanced of the companies pursuing pyrolysis. After KiOR announced in August that it had missed production goals, Khosla responded by committing an additional $50 million to help fund expansion of the firm’s facilities in Columbus, Miss.

Khosla has since raised that infusion to $85 million. A venture capital firm backed by software magnate Bill Gates is also investing $15 million in KiOR.

Competitors, meanwhile, are working furiously to get their versions of pyrolysis ready to produce fuels at the industrial scale. The nonprofit Gas Technology Institute (GTI) wants to leverage its 70 years of experience in natural gas technology. And privately held Ensyn is starting up a pair of high-profile ventures. Each firm hopes its technology will win the race to commercialization.

All pyrolysis-based fuel production follows the same basic pattern. It’s similar in concept and chemistry to the epochal processes that produced petroleum, just taking place over a much shorter time. Biomass such as corn stover, sawdust, or switchgrass is subjected to high pressure and heat in an oxygen-free atmosphere. The material decomposes, without combusting, into water plus carbon-rich gases, solids, and liquids.

The gas portion, mostly a mixture of H2 and CO called syngas, can be used as fuel or further processed into hydrocarbons. The solid, known as coke or char, is around 90% carbon and is usually burned to provide heat for the process. The liquid, known as pyrolysis oil, is a mixture of oxygenated hydrocarbons that can be chemically reduced to create a gasoline-like fuel.

Ethanol fermentation and pyrolysis aren’t the only energy-related uses for biomass. Cogeneration can burn the material to generate steam turbine heat. Gasification can convert it into syngas, which can be processed into liquid fuels using Fischer-Tropsch chemistry, an expensive but established industrial process.

But pyrolysis yields a higher-value product per pound of biomass than cogeneration and can get to a liquid more cheaply than gasification, according to Daniel Choi, an analyst with technology consulting firm Lux Research. If pyrolysis firms can become good enough at upgrading their liquid to the quality of drop-in fuels, pyrolysis could become the best use for waste biomass, Choi says.

Chicago-based GTI is one organization that thinks pyrolysis can be profitable. GTI has tweaked pyrolysis in a process it calls IH2. “Our technology is different because we are doing hydropyrolysis at moderate pressures of 350–500 psi under H2 and slightly lower temperature than conventional pyrolysis,” says Terry Marker, GTI’s principal investigator on IH2. The biomass stays in the primary reactor for several minutes, as opposed to seconds or less in competing systems.

The H2 atmosphere, mild conditions, long residence times, and a proprietary catalyst allow GTI to remove a great deal of the oxygen right off the bat. The liquids and gases then undergo catalytic hydrogenation in a secondary reactor to remove the remaining oxygen. The result is essentially a mixture of gasoline and diesel along with syngas and some gaseous hydrocarbons. The gases are steam-treated on-site to produce the requisite H2, making the system largely self-sufficient, GTI says.

The IH2 process was developed with funding from the Department of Energy in partnership with CRI Catalyst, a Shell subsidiary. CRI came up with the catalysts and is also licensing the technology to industry for commercialization. A 50-kg-per-day pilot plant is up and running and has logged more than 750 hours of continuous operation. Marker says GTI recently inked several agreements to build demonstration- or commercial-scale IH2 units.

“We are behind Ensyn and KiOR, who are already testing or will be testing shortly at larger scales,” she says. “But we think we can catch them soon.”

The firm that will be hardest to catch is KiOR, which has a plant up and running in Columbus and made its first shipments of diesel in March.

BIOCRUDE
[+]Enlarge
Credit: Ensyn
Pyrolysis oil like this test batch from Ensyn may soon be converted into transportation fuels. 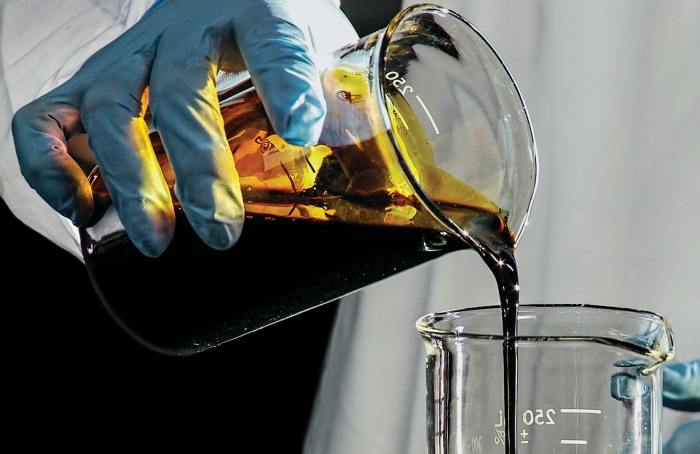 Credit: Ensyn
Pyrolysis oil like this test batch from Ensyn may soon be converted into transportation fuels.

The firm’s approach is to adapt existing technologies to the task of converting biomass to fuels. KiOR uses equipment from the paper industry to dry and grind the biomass. It’s fed into a reactor modified from fluid catalytic cracking (FCC), the dominant technology used to refine oil into gasoline. A zeolite catalyst aids the pyrolysis process, which lasts only a few seconds.

KiOR then separates the pyrolysis oil from the other products and removes oxygen by hydrogenation, using purchased hydrogen. The product is then ready to be distilled into fuels through standard oil refining technology.

KiOR Chief Executive Officer Fred Cannon recently predicted that the Columbus plant will produce up to 2 million gal of gasoline and diesel by the end of 2013. Scale-up of the facility to the target 13 million gal per year is under way but has been delayed by trouble with the feedstock handling systems.

The trouble caused discontent among KiOR shareholders, some of whom alleged in a lawsuit that they were misled about how ready the process was. Cannon asked for patience and emphasized that “these issues are not related to our core technology. They are simply part of the break-in process.”

With the help of the additional funding from Khosla, KiOR plans to build a second, similarly sized plant in Columbus at a cost of $225 million. A larger, 40 million-gal-per-year plant in nearby Natchez, Miss., has been put on hold for now.

Ensyn, meanwhile, has been producing pyrolysis oil from biomass on a commercial scale since 1989. Its primary customer up to now has been the flavorings maker Red Arrow, which extracts compounds, normally associated with the Maillard reaction, that impart smoky, grilled, fried, and toasted flavors. Ensyn burns the remaining liquid to fuel its facilities.

Ensyn’s reactor is a simplified version of an FCC system. It doesn’t use a catalyst but instead “vaporizes biomass with a tornado of hot sand” at relatively low pressure, the firm says. Ensyn has profitably produced more than 37 million gal of its pyrolysis oil and currently operates five commercial plants. But it is taking on a higher profile because of two new projects.

The first is Envergent Technologies, a joint venture with UOP, a leader in oil-refining technology. A demonstration plant being assembled in Oahu, Hawaii, will mate Ensyn and UOP technologies to produce transportation fuels from woody biomass. The venture also has funding support from the Department of Energy.

Ensyn’s reactor is already commissioned on the site, and UOP recently settled on a configuration for a pilot plant to refine the pyrolysis oil into gasoline and diesel. Ensyn CEO Robert Graham says he expects the operation to be up and running by the end of 2014.

The second project, with an independent oil company, involves blending a small quantity of pyrolysis oil into petroleum before refining. At the end of the process, “the value of the product is equivalent or better, but the gasoline yield goes up,” Graham says. That’s a win-win, because fuel produced this way qualifies for federal incentives under the Renewable Fuel Standard, and the most lucrative credits are those for transportation fuels.

Even if all of its practitioners are successful, pyrolysis will make only a small contribution to the fuel pool. Lux’s Choi points out that the global supply of agricultural and forestry waste adds up to the equivalent of 8.7 million barrels of crude oil per day, whereas global crude consumption is around 70 million bbl per day.

And KiOR’s scale-up troubles are a reminder that success is by no means assured. “It’s a big deal if KiOR, a leader in the sector, is not doing well,” Choi says. “Scale-up might be a recurring problem for pyrolysis.”

But GTI’s Marker is more bullish. “What we’ve all done is use the technology, chemistry, and catalysts—with some modifications—which were developed for petroleum refining and apply them to biomass conversion,” she says. “This will soon lead to large-scale production of standard gasoline and diesel fuels directly from biomass like wood, corn stover, and garbage at relatively low cost. It’s a real revolution, and it’s happening right now.”

Business
Red Rock’s Jet Fuel From Wood Gets Lift
Business
Nextfuels To Revive Shell Biofuels Demo
Environment
Ethanol-To-Butanol Conversion A Plus
Share X
To send an e-mail to multiple recipients, separate e-mail addresses with a comma, semicolon, or both.
Title: Race To Create Pyrolysis Biofuels Gets Hot
Author: Craig Bettenhausen
Chemical & Engineering News will not share your email address with any other person or company.

Comments
C. Somerville (November 11, 2013 9:10 PM)
The statement " And making it (ethanol) by fermentation consumes roughly half of the chemical energy available in its ideal starting material, glucose." is not correct. The conversion of glucose to ethanol results in the loss of about half the mass as CO2 but about 90% of the energy content is retained in the ethanol (which is more reduced than the glucose).
Reply »

Doug Dorman (November 26, 2013 2:37 PM)
I wonder what happens to the solid residue. Could it be sold as “biochar,” the soil amendment primarily responsible for “terra preta,” which Amazonians used 2000 years ago to improve their soil?
Reply »