Mass Spectrometer As A Surgical Tool 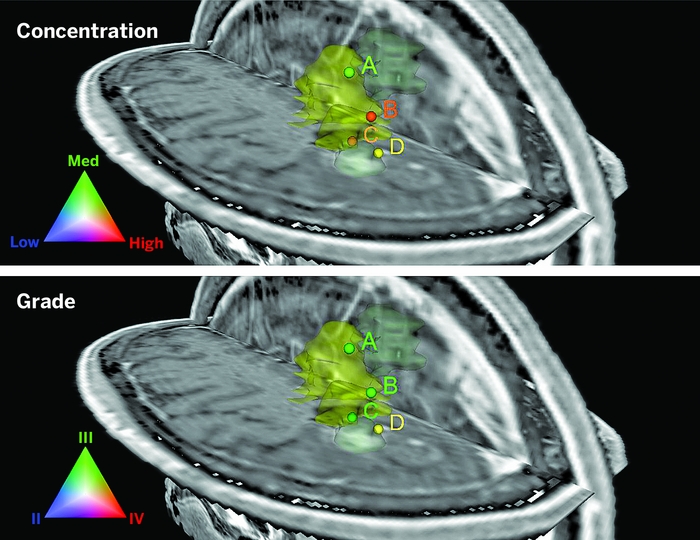 Mass spectrometers might not be typical surgical tools, but they are moving closer to the operating room. The goal in using them is to enable surgeons to distinguish a tumor from surrounding healthy tissue.

Hospitals generally use magnetic resonance imaging (MRI) preoperatively to define the extent of a brain tumor. Surgeons then excise extra tissue to make sure they remove all the cancer. While the patient is still on the operating table, pathologists prepare and inspect stained excised tissue under a microscope to make sure the surgeon has taken an adequate margin. But taking tissue samples to the pathology lab adds time to an already lengthy operation. Mass spectrometry performed in the operating room could give surgeons the information they need faster—in minutes rather than an hour.

Cooks and Agar’s team built a mass spectral library from analyses of brain cancer samples that had been classified by pathologists according to type, grade, and concentration of cancer cells. The mass spectral signatures are based primarily on lipid composition. The researchers then used mass spectrometric imaging to analyze brain samples removed during surgery. Although the samples were removed during surgery, the analysis was done afterward and compared with conventional pathology analysis.

In the case of brain tumors, infiltration of the cancer into surrounding tissue is a major concern. A single tissue section can contain healthy tissue and several grades of cancer. “There are no clear margins,” Cooks says. “The DESI experiment teaches us that even a 3 × 5-mm section of tissue is highly heterogeneous.”

Cooks and Agar’s team used its system to diagnose tissue samples from five brain surgeries, classifying the tumors as either glioma or meningioma, types of brain cancers that originate from different types of cells. They were able to further differentiate gliomas by subtype, grade, and tumor cell concentration. In one case, they found tumor cells outside the tumor region observed with preoperative MRI. Because of the infiltrative nature of high-grade gliomas, it’s generally impossible to cut all the cancer out. Standard practice is to try to strike a balance: Get as much of the solid part of the cancer as possible without causing significant neurological problems.

The DESI images have 200-μm resolution. Better resolution is possible, but it slows down the data acquisition. And improved resolution probably wouldn’t help surgeons anyway. “I don’t think a surgeon with the available tools can accurately cut well below 1 mm,” Cooks says.

Geoffrey S. Young, a radiologist also at Harvard Medical School, is developing Raman methods with similar goals of improving and speeding tissue analysis during brain cancer surgery. He points out, however, that although both optical and mass spec methods seem likely to help increase completeness of tumor removal, they may not improve outcomes significantly for brain cancer patients compared with the current standard of care.

“These are all interesting technologies for imaging the tumor margin and further increasing the completeness of resection,” Young says. “The problem is that once you’ve done that, it’s not clear that you’ve helped the patient that much. You don’t necessarily get that much more overall life expectancy by having slightly more extensive resection. We may need to focus instead on integrating these methods with molecular pathology to improve biopsy guidance and assessment.”

Whereas Cooks’s method at this point still requires removal of tissue samples, Takáts’ approach is to use REIMS during cancer surgery, currently on an experimental basis. “We have six instruments being used on a daily basis in three countries,” Takáts says. So far, he and his collaborators have used the technology on approximately 500 patients undergoing cancer surgery.

“We are not allowed to fully rely on the mass spec technology,” Takáts says. “We still have to do histopathology.” But complementary use of the two techniques doesn’t discourage him. “This way we can almost automatically validate our findings,” he says.

The system gives surgical staff two types of feedback, Takáts says. The first is a simple color code for tissue types—red for tumor and green for healthy tissue. The second type of feedback is histological identification. As with Cooks’s method, REIMS identification is based on comparing a tissue’s mass spectrum with a library of spectra from known cancer types. He and his colleagues have used the method for more than 40 tissue types, Takáts says.

As part of a goal of achieving appropriate margins, Takáts wants the surgeon to know how close is close enough without having to cut into the tumor itself. “Imagine you have a cutting device in your hand,” Takáts says. “You start moving along the originally planned resection line, but the instrument tells you you’re getting too close to the tumor.” The altered phospholipid distribution around the tumor provides that information. “It looks like we’ll be able to say, ‘You’re getting into the red zone, so stop here.’ ”

Takáts focuses on REIMS in the hope that the ubiquity of electrosurgical tools will lead to widespread adoption of mass spectrometry in the surgical suite. Mass spectrometers could be made available “in any operating theater in the world, ranging from the least developed parts of the world to the most advanced state-of-the-art surgical theaters,” he says.

Neither Cooks nor Takáts is trying to replace pathologists. The researchers are trying to give them a faster tool to replace their stains and microscopes. Cooks says that the methods, which just use mass spectrometers instead of microscopes, “should become the province of pathology.”