Crossroads In India For Petrochemicals

Industry is growing rapidly, yet it faces a host of challenges 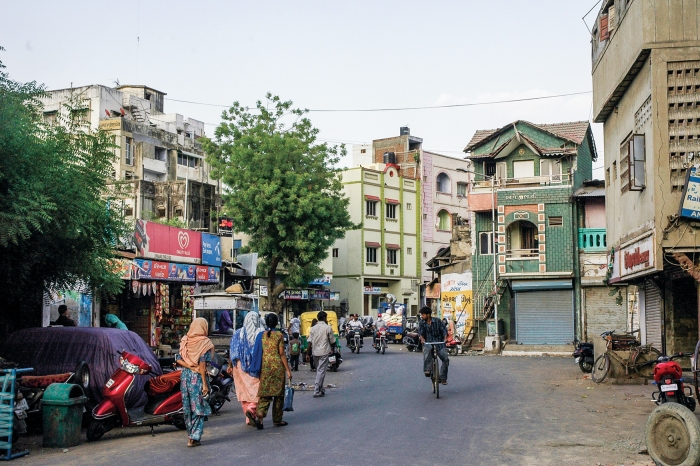 Requiring investments of several billion dollars each, the Indian complexes are integrated with nearby oil refineries to create economies of scale and help them compete with facilities in the U.S. and Middle East that consume cheaper raw materials. Using oil-derived naphtha as a feedstock, the complexes will generate a wider stream of useful products than new plants in the U.S. that rely on natural gas.

And yet, despite its spectacular growth, India’s petrochemical industry is struggling. At the 2nd India Petrochemical Focus, a conference held last month in Mumbai by CDMC Events, speakers and participants lamented the country’s subpar infrastructure, its high cost of capital, and its shortage of industrial land. If these and other issues are not addressed, they cautioned, the current building boom will be short-lived and India’s future basic chemical needs will mostly be met by imports.

“Refineries combined with petrochemical complexes are viable projects in India,” argued Gitesh K. Shah, an independent director at Hindustan Petroleum, a state-owned oil refiner known as HPCL. “But for the future development of the industry, favorable policies are essential.”

To meet domestic energy needs, India will need to build about 10 new refineries by 2020, Shah noted. This spring, HPCL signed a memorandum of understanding with the government of Rajasthan to build one of them, a $6 billion refinery/petrochemical complex in the oil-rich northwest state. But it’s too early to tell whether the project, which will take four years to build after obtaining regulatory clearances, will actually go forward. 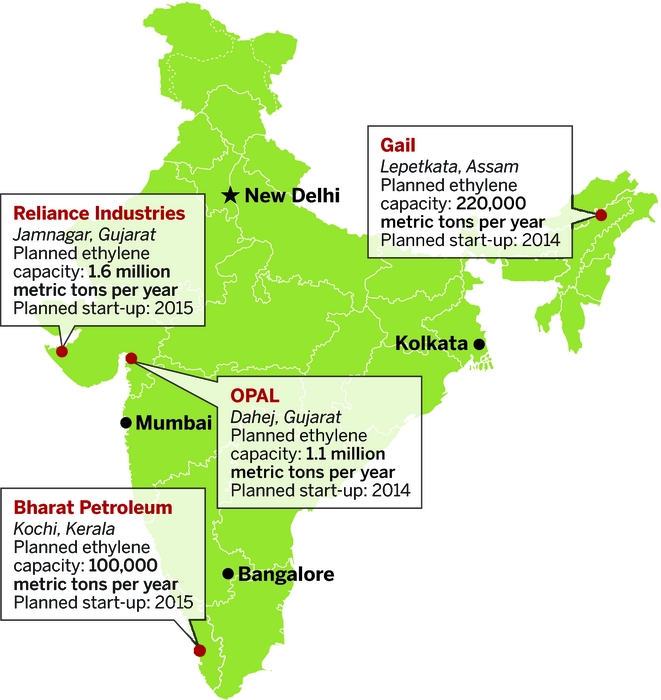 India will add 3 million metric tons per year of ethylene capacity in the next two years. SOURCE: Mitsubishi Corp.

Four other projects that are in late stages of construction will come on-line either next year or in 2015, said Jun Hayashi, an analyst at the Japanese trading firm Mitsubishi Corp. Collectively, they will add 3 million metric tons of ethylene production capacity to India’s current 4 million metric tons. Capacity for ethylene, a basic material used to make polyethylene and many other industrial chemicals, often serves as a yardstick to measure the size of a country’s petrochemical industry.

Soon to surpass China as the world’s most populous country, India offers vast opportunities for petrochemical suppliers. In developing countries such as India, demand for plastic packaging materials typically expands at twice the rate of the overall economy, said M. Sanath Kumar, head of polymers at ONGC Petro Additions (OPAL), which is building a petrochemical complex in western India.

India’s economy will likely grow by almost 5% in 2013 and nearly 6% in 2014, according to the Asian Development Bank. As Indians get richer and the country’s cities become more populated, consumers are increasingly buying food that is packaged in plastic, Kumar pointed out.

Meanwhile, the outlook is even rosier for producers of synthetic rubber. Between 2008 and 2012, demand for the material, used largely in tires, grew by 15% annually, said Mohil Pandey, senior research analyst at Beroe Consulting.

Industry is responding to this strong demand by taking advantage of synthetic rubber raw materials that come from petrochemical complexes. Unlike the gas-fed petrochemical facilities being built in the U.S. and Middle East, the naphtha-based ethylene plants going up in India turn out plenty of the benzene and butadiene needed to make styrene-butadiene rubber.

Capacity for SBR will surge in coming years from the current 20,000 metric tons per year to 370,000 metric tons in 2015, and India will become an exporter, Pandey said. Over the next few years, India will account for more than one-third of the world’s new SBR capacity, he predicted.

But as it expands, India’s petrochemical industry faces many challenges, conference participants acknowledged. Mitsubishi’s Hayashi pointed out that Indian companies are at the mercy of imported crude oil and may not be competitive if crude prices surge. “Naphtha-based India is expensive compared with the rest of the world,” he said.

And although India’s infrastructure has improved in recent years, it still lags compared with other countries. “Infrastructure is horrible in India,” Binay Agrawal, project leader for chemicals at Tata Strategic Management Group, a management consulting firm, bluntly stated. “It’s hard to ship products.”

Securing land is another issue facing petrochemical producers. The price of land has “skyrocketed” in recent years in chemical industry parks launched by Indian government agencies, HPCL’s Shah noted. Companies also face high financing costs, he said. The repo rate, the official lending rate, set by the Reserve Bank of India is nearly 8% currently, compared with an equivalent rate of close to 0% in the U.S., as set by the Federal Reserve.

India has tried to solve the infrastructure problem by creating dedicated chemical industry parks such as those that exist in China, Europe, the U.S. Gulf Coast, and Singapore. Called Petroleum, Chemicals & Petrochemicals Investment Regions, or PCPIRs, they were established as places where, at least in theory, companies have access to world-class infrastructure and to raw materials that they can trade among themselves, often easily by pipeline.

But India’s PCPIR policy is flawed, Tata’s Agrawal argued. The country has created four chemical industry estates instead of focusing resources on a single world-class hub. Located in the northeast, west, southwest, and southeast of India, the four estates leave much to be desired, he said. “PCPIRs seem to have been victims of politics, with each Indian state pushing for its own refinery,” he said.

For instance, in the most developed PCPIR, in Dahej on India’s west coast, companies have difficulty securing water to run their plants. Dahej also lacks a port to handle imports and exports, even though it’s on the sea. And so far, the opportunities to secure raw materials on-site are few because OPAL, which is setting up its petrochemical complex there, plans to consume most of its output in its own downstream plants.

Despite their flaws, PCPIRs represent a step forward for India’s petrochemical industry. But participants at the conference said they will not be enough for India to establish and maintain a global impact.

A Tata consultant frankly summarized the predicament. “There is a world going by at 100 mph, and we will not catch up by going at 20 miles,” said Charu Kapoor, engagement manager at Tata. “I hope we wake up; otherwise we will have to import a lot of chemicals.”

Petrochemicals
Middle Eastern oil companies to focus on chemicals
Business
Another try at Vietnam’s first cracker
Sustainability
Chemical Outlook 2015 By Region
Share X
To send an e-mail to multiple recipients, separate e-mail addresses with a comma, semicolon, or both.
Title: Crossroads In India For Petrochemicals
Author: Jean-François Tremblay
Chemical & Engineering News will not share your email address with any other person or company.