Probe poked and prodded the Red Planet, finding water and signs of organic compounds, suggesting mars was once capable of supporting life

[+]Enlarge
Credit: NASA/JPL-Caltech/MSSS
Curiosity analyzed the dirt it scooped from the martian surface. 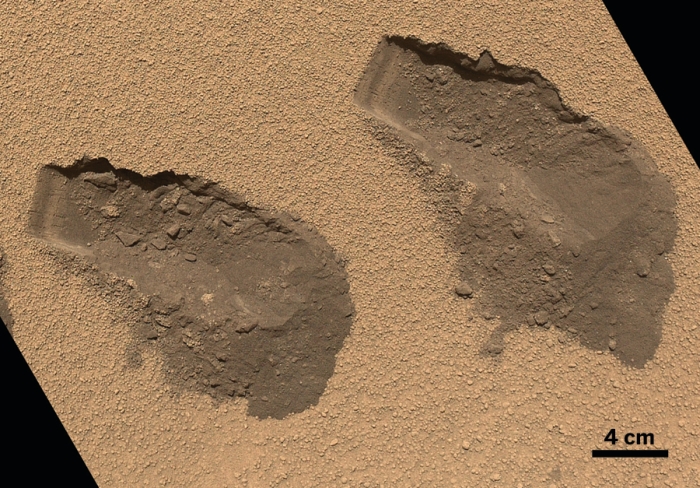 Credit: NASA/JPL-Caltech/MSSS
Curiosity analyzed the dirt it scooped from the martian surface.

For as long as humans have known about Mars, we’ve wondered whether our most Earth-like planetary neighbor was at some point habitable. In the latest effort to find out, NASA sent the Curiosity rover to poke and prod the Red Planet. The rover touched down on Mars in August 2012 carrying two laboratories for performing sophisticated extraterrestrial chemistry on rock, soil, and gas samples via mass spectrometry, tunable laser spectrometry, gas chromatography, and X-ray diffraction. In March this year, scientists announced at a press conference that Curiosity had confirmed that life could indeed have existed on Mars during the past several billion years (C&EN, March 18, page 7). Scientists had known from earlier missions that water once flowed on the planet, and then Curiosity discovered that 20 to 30% of the gray-green rock powder it analyzed is composed of the clay mineral smectite, which is only known to form in water. The rock also contains calcium sulfate, which has a neutral pH, making it organism-friendly. “We have found a habitable environment that is so benign and supportive of life that if you were around, you would have been able to drink the water,” said Curiosity project scientist John P. Grotzinger. The instruments further detected alkaline and fractionated magmas, which are similar to Earth’s igneous rocks (C&EN, Sept. 30, page 27). And samples of Mars’s crust heated by Curiosity’s onboard ovens released volatile compounds such as carbon dioxide, sulfur dioxide, water, and oxygen. Scientists suggest that these species could have been incorporated from the planet’s atmosphere. With that task under its belt, Curiosity turned to a thornier problem: discovering and identifying organic compounds that might be trace signatures of past life. In a series of papers published in early December in the journal Science, Curiosity mission team members reported finding oxychlorine compounds and nitric oxide in powdered rock samples (C&EN, Dec. 16, page 7). The substances detected from the heated rock samples may be combustion products of organic molecules, with the NO finding representing the first detection in a martian rock of nitrogen, an element required by all life-forms. Curiosity also directly detected dichloropropane and chlorobenzene, two chlorocarbons not reported in the Science papers. NASA’s exploration of Mars continues.