[+]Enlarge
Credit: Newscom
President Obama delivers his State of the Union address before a joint session of Congress as Vice President Joe Biden (left) and House Speaker John A. Boehner (R-Ohio) look on. 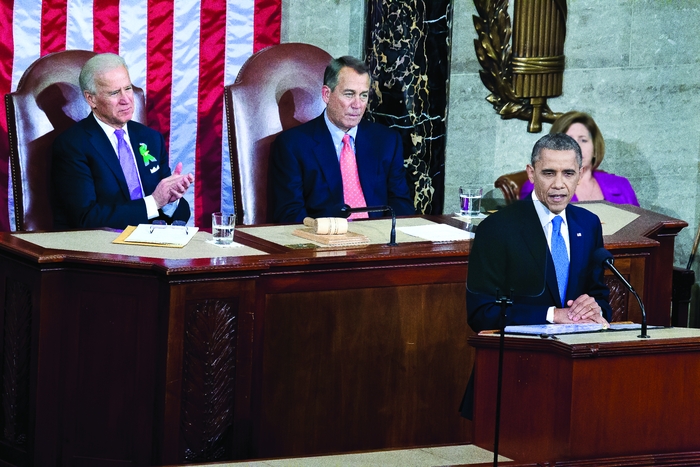 Credit: Newscom
President Obama delivers his State of the Union address before a joint session of Congress as Vice President Joe Biden (left) and House Speaker John A. Boehner (R-Ohio) look on.

President Barack Obama in his Feb. 12 State of the Union address presented a broad and ambitious agenda with an overriding emphasis on manufacturing and jobs. The President proposed something for nearly everyone. That included topics of keen interest to the chemistry enterprise: a free-trade agreement with the European Union (EU) and development of fossil-fuel resources, as well as support for science.

By and large, the President’s proposals drew applause. However, many of his agenda items, which also included gun control; renewed focus on science, engineering, technology, and math (STEM) education; and the minimum wage, may prove tough to implement in the sharply divided Congress.

On the free-trade agreement, the President said, “Trade that is free and fair across the Atlantic supports millions of good-paying American jobs.”

Energy independence was also a significant part of Obama’s address—but with a jobs flavor. “After years of talking about it, we’re finally poised to control our own energy future,” the President said, noting the U.S. is producing more oil than it has in 15 years and more natural gas than ever before. He promised to cut red tape and speed up new oil and gas permits.

However, while backing fossil-fuel development, Obama also urged that the nation actively combat climate change. Congress, he said, should pursue a market-based solution similar to a 2009 House-passed carbon cap-and-trade bill to control greenhouse gas emissions. That bill subsequently died in the Senate. If Congress fails to act, Obama said he would direct his Cabinet to come up with executive actions to reduce greenhouse gas emissions, mitigate the impact of climate change, and speed the transition to “more sustainable sources of energy.”

Again, he underscored the importance of jobs, this time stressing that they will come along with a new clean energy marketplace, particularly in the expanding solar and wind power industries.

His emphasis on jobs was closely tied to support for education, training, and manufacturing—especially in STEM and other high-tech areas.

To help create jobs, Obama returned to a $1 billion proposal his Administration made last year for a national network of 15 manufacturing research centers. The National Network for Manufacturing Innovation would create “research hubs” where industry, academia, and government would join to turn basic science discoveries into advances companies can use.

Congress, however, has not funded the network. Instead, last year the Administration used $45 million from the Department of Defense to fund the network’s first pilot project in Youngstown, Ohio, to focus on three-dimensional printing. Three similar projects are on tap for this year, the President said, two funded by DOD and one by the Department of Energy.

Obama’s address comes as the nation faces some tough budget challenges. On March 1, the $85 billion sequester—automatic, across-the-board federal spending cuts designed to reduce the nation’s budget deficit—is set to kick in. Also, Congress has yet to finalize a fiscal 2013 budget, leaving the government to operate at 2012 levels since Oct. 1, 2012. The President made it clear in his address that Congress must replace the sequester and finalize this fiscal year’s budget or the U.S. economic recovery will be derailed.