[+]Enlarge
Credit: William Ausich
Crinoid fossils from about 340 million years ago. They are about 1.5 inches long. 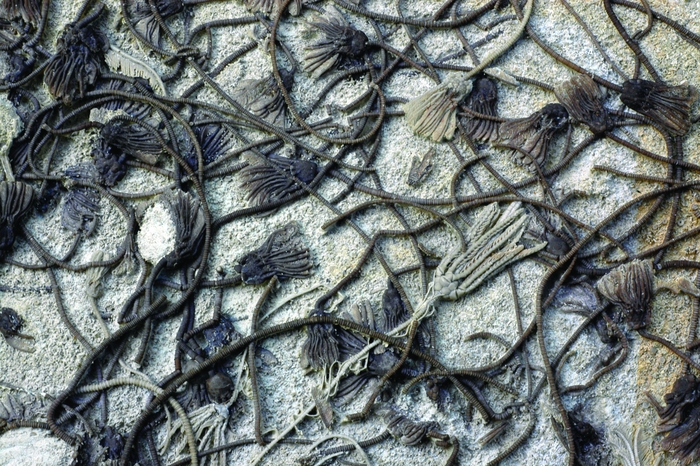 Credit: William Ausich
Crinoid fossils from about 340 million years ago. They are about 1.5 inches long.

Many fossils are tinted with color, but few have had their pigments chemically analyzed. Now, researchers are reporting the oldest pigment molecules extracted from fossils of a known organism—namely, approximately 340 million-year-old fossils of marine animals called crinoids, which are related to sea cucumbers, starfish, and urchins (Geology, DOI: 10.1130/G33792.1).

The techniques used to measure the pigments could be easily applied to other tinted fossils, says Christina E. O’Malley, who did the analysis with paleontologist William I. Ausich and chemist Yu-Ping Chin, all of Ohio State University. In addition to reconstructing the color palette of ancient organisms, O’Malley hopes that organic molecules preserved in ancient fossils could help unravel phylogenetic relationships among fossilized and contemporary organisms.

Crinoid fossils can vary in color from white to brown and reddish purple, O’Malley says. After taking about a gram of sample from fossils of three crinoid species, Barycrinus rhombiferus,Cyathrocrinites iowensis, and Elegantocrinus hemiohaericus, the team identified a complex mixture of pigments that corresponded to aromatic or polyaromatic quinones.

Still found in deep marine waters today, crinoids are animals that look like “flexible stone flowers,” says Tony Dickson, a crinoid fossil expert at the University of Cambridge, who did not participate in the research. “Crinoids have a very peculiar skeleton,” which makes them amenable to pigment analysis, he adds.

The skeleton is half porous calcite and half soft tissue, which fills the calcite crystal pores. During the fossilization process, the animal’s external pores can be quickly capped, trapping the soft tissue inside, where it decomposes, leaving behind pigments. Crinoids turn into fossilized “crystal caskets” for pigments, Dickson says.

This is not the first time researchers have identified pigment residues on fossils, although it is an emerging field. For example, in 2011, paleochemists identified the feather color of ancient winged dinosaurs from 120 million-year-old fossils, some 220 million years younger than the crinoid fossils.