Unmasked
[+]Enlarge
Credit: Chem. Res. Toxicol.
Crops such as wheat modify the mycotoxin deoxynivalenol with a glucose molecule (top). Human gut bacteria can cleave off the sugar and release the free toxin (bottom). 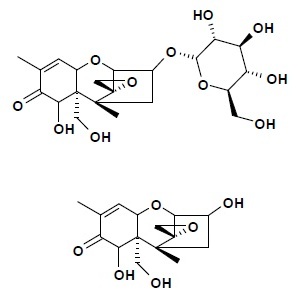 Credit: Chem. Res. Toxicol.
Crops such as wheat modify the mycotoxin deoxynivalenol with a glucose molecule (top). Human gut bacteria can cleave off the sugar and release the free toxin (bottom).

Crops such as wheat, corn, and peanuts sometimes harbor chemicals from molds that grow on the plants. Some of these compounds are seemingly harmless derivatives of toxins produced by the fungi. For the first time, researchers have shown that human gut bacteria can break down these compounds and release the toxins, which can cause gastrointestinal and neurological damage (Chem. Res. Toxicol., DOI: 10.1021/tx300438c). 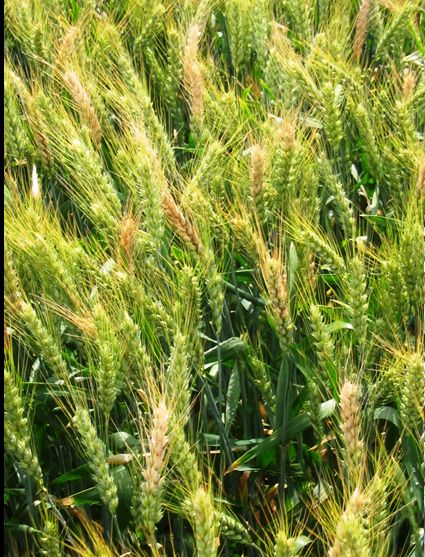 The findings strongly suggest that these masked toxins may not stay hidden within our digestive tracts, and that government agencies may need to regulate the chemicals, the researchers say.

Scientists have long known that fungi, such as Fusarium graminearium, deposit toxins on food crops. These so-called mycotoxins can contaminate the food supply, causing a wide range of nasty effects and even death in people and livestock. As a result, many countries set a limit for the amount of mycotoxins in food and animal feed.

But in the past decade, scientists have discovered that mycotoxins can hide. The toxins are harmful to the crops themselves, so, as a defense strategy, the plants neutralize the mycotoxins by tacking on a sugar or sulfate group to the chemicals. Because of this chemical modification, these masked mycotoxins slip past current detection methods used by food safety inspectors. Also scientists don’t know much about the toxicity of the derivatives.

If cereal grains hold masked mycotoxins, “what happens to the compounds during human digestion?” asks Chiara Dall’Asta, a chemist at the University of Parma, in Italy. “Are they less toxic or as toxic as their parent compounds?”

To answer those questions, Dall’Asta and her colleagues simulated the entire human digestion process from mouth to large intestine in their laboratory. They watched what happened to three common masked mycotoxins in this simulated digestive tract. One compound was the toxin deoxynivalenol masked with a glucose molecule, and the other two were derivatives of zearalenone modified with either glucose or a sulfate group.

When the team incubated the compounds with digestive juices and enzymes from the mouth, stomach, and part of the small intestine, nothing happened. But when the researchers mixed the two chemicals with human fecal samples in a warm airless bath for a day, bacteria in the feces freed the toxins. The experiment mimicked conditions in the large intestine. It took the microbes 24 hours to completely cleave the masked deoxynivalenol, but only 30 minutes to free zearalenone.

A team in Scotland, led by Silvia Gratz at the University of Aberdeen, recently reported similar findings (Appl. Environ. Microbiol., DOI: 10.1128/AEM.02987-12). Those researchers found that fecal bacteria could free deoxynivalenol within about six hours.

These are the first reports that, under body-like conditions, human gut bacteria can unmask mycotoxins, says Franz Berthiller, at the University of Natural Resources and Life Sciences, in Vienna, who was not involved in either study. He points out that the toxicology of the masked compounds needs further study. In particular, researchers must determine how much of the freed toxin reaches the bloodstream, he says. If the toxins are liberated only inside the large intestine, the body may absorb very little of the chemicals, Berthiller adds.

Dall’Asta agrees about the need for more toxicology studies. And she hopes that the Scottish study and her work will prompt food safety regulators to consider monitoring for masked mycotoxins.

Comments
James L. (February 13, 2013 4:20 PM)
Many people appear to suddenly become gluten intolerant after years of not being so inclined. Is it possible the intolerance is instead a reaction to the hidden toxins in wheat products followed by sensitivity thereafter?
Reply »

Antibiotics should clear it.
Reply »

M. Olesen (February 17, 2013 8:44 AM)
Are the RoundUp Ready and Bt GMO crops likely to release the chemicals engineered in their seeds?
Reply »

John Fryer (March 24, 2013 7:02 AM)
Wheat, corn and peanuts did not release these toxins in the past UNLESS we ate mouldy bread et al and even here outbreaks have been blamed on Big pHARMa experimenting with chemical toxins on populations as in southern France for example in the 1950's.

Today we have changed and altered the chemical makeup of foods or incorporated for example peanut oil into vaccines without full knowledge of the consequences.

Or as some say even with knowledge of long term harm.
Reply »

Christina Darabi (September 20, 2013 8:50 PM)
Can the human gut bacteria also breakdown and release the mycotoxins found in fruits, wine, nuts and tomatoes? Or are you saying that the mycotoxins are more dangerous on grain as they are hidden and hence not monitored.
Reply »