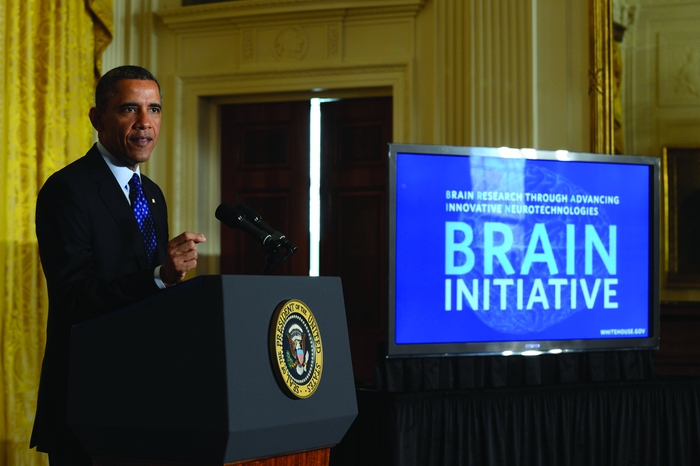 The White House announced this week a new initiative to help understand the workings of the human brain. With a proposed initial federal investment of $100 million, President Barack Obama called the effort to map the dynamics of human nerve cells the “next great American project.”

“As humans, we can identify galaxies light years away, we can study particles smaller than an atom,” Obama said. “But we still haven’t unlocked the mystery of the 3 lb of matter that sits between our ears.”

The initiative is part of the President’s proposed fiscal 2014 budget, which is expected to be released in full on April 10. Congress will have to sign off on the program through its appropriations process. It’s unclear how a new program like this will fare in the current, uncertain fiscal environment.

As proposed, three agencies will participate in the initiative known as BRAIN (Brain Research through Advancing Innovative Neurotechnologies). The Defense Advanced Research Projects Agency will contribute $50 million in a set of programs designed to study the dynamic functions of the brain and then use the results to develop applications. The National Institutes of Health will invest about $40 million mainly through its NIH Blueprint for Neuroscience Research initiative. And the National Science Foundation will kick in some $20 million in research funding.

The initiative will also include support from private partners, including the Allen Institute for Brain Science, the Howard Hughes Medical Institute, the Kavli Foundation, and the Salk Institute for Biological Studies. A group of neuroscientists, supported by NIH and led by Cori Bargmann of Rockefeller University and William Newsome of Stanford University, has been charged with coming up with a plan, specific goals, and an estimated milestone time frame for the project.

The initiative will build on recent strides in neuroscience research. For instance, researchers can now record the firing of individual neurons in cultures as well as the simultaneous firing of a few thousand neurons in animals. And they can get a course-grained look at how regions of the human brain are connected with techniques such as functional magnetic resonance imaging.

But the human brain contains 85 billion neurons, and those cells connect through an estimated 100 trillion junctions, or synapses. Many scientists have argued that until tools exist to monitor the simultaneous firing of millions of neurons or more, how the human brain functions—and dysfunctions—will remain a mystery. Better understanding of the connectivity of nerve cells, researchers argue, could help treat conditions such as autism and schizophrenia, in which faulty neuronal circuitry has been implicated.

“Neuroscience is getting to the point where researchers cannot take the next big step to understand neural circuits armed with traditional technology,” said Rafael Yuste, a neuron-imaging expert at Columbia University.

So Yuste and several colleagues proposed a Brain Activity Mapping project in 2012 (Neuron, DOI: 10.1016/j.neuron.2012.06.006) that would bring together neuroscientists, engineers, chemists, and physicists to develop technology to bridge the knowledge gap. Together with the Kavli and other foundations, the group convened hundreds of experts at a series of workshops to brainstorm how to accomplish the feat. The BRAIN Initiative is the new, official name for the Brain Activity Mapping project.

The BRAIN Initiative aims to follow in the footsteps of the Human Genome Project. “Every dollar we spent to map the human genome has returned $140 to our economy,” Obama said. In comparison, the federal investment for the first year of the genome project was only $28 million.

Of Obama’s unveiling of the BRAIN initiative, “It’s very exciting to be getting started,” says Paul S. Weiss, a chemist and nanoscientist at the University of California, Los Angeles, who was involved in developing the proposal. “The ability to do these measurements is going to make a difference, not only for the field, but also hopefully for people suffering from all kinds of neurological diseases.”

Analytical Chemistry
Titanium nitride probe records more neurons than ever before
Environment
Grand Challenges and opportunities for chemistry
Biological Chemistry
How evolution repurposed a bone gene for brain development
Share X
To send an e-mail to multiple recipients, separate e-mail addresses with a comma, semicolon, or both.
Title: White House Unveils $100 Million BRAIN Initiative
Author: Lauren K. Wolf
Chemical & Engineering News will not share your email address with any other person or company.

Gerry Atrickseeker (April 4, 2013 5:35 PM)
The Brain Activity Map (BAM): The Pluses and Minuses of Science Policy in the Making.

Whether or not the BAM project becomes a major scientific success, it is a notable example of how science policy decisions are made. A relatively small group of scientists and foundation people were able to create a compelling vision and then ‘sell’ it to senior policy makers.

In the broadest sense it will be good to see any new investment in basic science. However, is the BAM the very best use of the approximately $100M/year research investment? In terms of overall global good would the money be better spent on malaria research? On better antibiotics for drug resistant bacteria? On early detection of tumors?

The BAM episode highlights the fact that we do not have a systematic approach to assessing the nation’s need for research and development. While such approaches have been suggested they have never really been implemented. For the most part, science policy, especially in the biomedical arena, is driven by pressures from interest groups, primarily patient advocacy organizations. While the concerns of patients clearly need to be represented, sometimes disease-focused research is not the most rapid path to progress. That is why the BAM project is so interesting; like its Genome Project predecessor, it is primarily driven by basic research issues rather than having a disease focus.

Thus the BAM project may provide a model for scientists in other areas to energize their fields with new funding. Unfortunately it also exemplifies the lack of a logical, systematic approach to public funding of science.