Materials Science: A chemical treatment makes a household sponge thirsty for oil instead of water 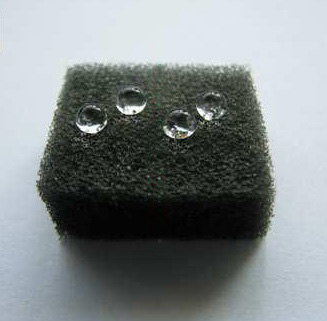 A sponge that can’t absorb a single drop of water may seem like a dud. But if it readily soaks up oil, it could help purify chemical syntheses or clean up oil spills on water. Researchers now report a simple chemical method for turning a household sponge into a water-blocking oil absorber (Ind. Eng. Chem. Res. 2013, DOI: 10.1021/ie400942t).

Picking Up Petrol
[+]Enlarge
Credit: Ind. Eng. Chem. Res.
Researchers mixed petroleum with water in a petri dish (a) and then added a superhydrophobic sponge (black, b). After five minutes, the sponge had absorbed most of the oil from the water (c).

Credit: Ind. Eng. Chem. Res.
Researchers mixed petroleum with water in a petri dish (a) and then added a superhydrophobic sponge (black, b). After five minutes, the sponge had absorbed most of the oil from the water (c).

In response to oil spills on water, cleanup crews often turn to sorbent materials, such as wool, straw, cotton, and synthetic sponges, to separate oil from the water. Sponges are the best choice for the job, say Zhaozhu Zhang and colleagues at the Chinese Academy of Science. The materials can absorb a lot of liquid in a short time, and they can float. However, they suck up water as well as oil, so the sponges’ soaking capacity isn’t fully used to remove oil. To make the materials more efficient, Zhang and colleagues decided to make an oil-specific sponge.

The researchers purchased polyurethane sponges at a local furniture store and coated its entire surface with a thin layer of polypyrrole. This polymer is well known for being water-repellent and having a strong affinity for oil, says Paul L. Edmiston, a chemist at the College of Wooster, who was not involved in this study.

To prepare the sponge for its polypyrrole coating, the researchers first dipped it into ferric chloride and 1H, 1H, 2H, 2H-perfluorooctyltriethoxysilane (PTES). They then put the PTES-coated sponge into a sealed chamber over a pool of volatile pyrrole, which vaporized and infused the sponge. The PTES helped the pyrrole adhere to the sponge surface. Meanwhile, the iron from the ferric chloride helped to catalyze the polymerization of the pyrrole into a thin coating over the sponge’s pores.

When the scientists added droplets of water to the surface of the revamped sponge, the water stayed in a bead and wasn’t absorbed. Droplets of oil, however, disappeared into the sponge immediately. The researchers also dipped the sponge into a variety of oils, including motor oil and soybean oil. The sponge sopped up more than 20 times its dry weight for each of the oils. The team tested how the sponge fared after reuse: They sopped up oil with the sponge and then wrung out the absorbed oil. After repeating those steps five times, the sponge could absorb at least 17 times its weight in oil.

Other groups have modified meshlike materials to absorb oil, Edmiston says. But he likes the idea of an oil-absorbing sponge, because it has “lots of room to pick up the oil.”

Edmiston is concerned that the cost of making these sponges would be prohibitive in the case of a large-scale oil-spill cleanup operation. Although the sponges themselves are cheap, the chemicals used in the treatment are expensive. The superhydrophobic sponges, though may find a place in certain industrial operations, Edmiston says, like removing hydrophobic solvents during chemical syntheses. Such small-scale applications would probably be the first uses for the revamped sponges, he says.

Comments
Eric (June 27, 2013 4:21 AM)
Well if billion dollar profiting oil companies weren't run by such cheap and environment unfriendly assholes maybe the cost of these effective sponges wouldn't matter. The world is run by greedy scumbags that only look to make a profit and don't care about anything else. They don't care who or what gets hurt as long as the money keeps rolling in. It's a shame and its the reason the work is such an awful place these days. The oil companies should be made to buy these sponges if they are the most effective way to clean up an oil spill. Our planet is suffering because of this greed and inconsideration. They made the mess...they should pay to clean it up the best way!!! End of story
Reply »

Anti-Troll (June 27, 2013 8:21 PM)
Eric, your dramatic rant is more than obvious. How about commenting on the article itself, rather than focusing on a tangential issue that you entirely over-simplified.

I think this is a fantastic idea that will have great small-scale applications in my garage. Great work China!
Reply »

blake (July 1, 2013 6:30 PM)
"Well if billion dollar profiting oil companies weren't run by such cheap and environment unfriendly assholes maybe the cost of these effective sponges wouldn't matter. The world is run by greedy scumbags that only look to make a profit and don't care about anything else."
Unfortunately that's what drives the economy.
Reply »

E (July 2, 2013 1:57 PM)
I'm assuming this research is just starting and only on the bench scale. If it looks promising after additional bench scale testing (cost and benefit wise) the next step would be pilot scale testing. If there are interested companies they will more than likely fund additional research which would certainly include different compounds than PTES or a more cost effective method of producing PTES.
Reply »

Flash (July 3, 2013 3:01 AM)
I work for a spill absorbent company. For years there has been products that will do exactly what this "mew" treatment does. The nature of the products is polyproplene and are called hydrophobic (they are treated before they are sold to companies like mine). These will products are particulate and absorbent sheets made of polyproplene. I have seen these work in the field and they do not soak up water. Putting the treatment into sponges might be the breakthrough, but making a product hydrophobic is not.
Reply »

Rick Hudson (July 3, 2013 3:09 AM)
Are the sponges available for sale? If so please contact me. I am a chemist in the business of treating water as well as small environmental clean up. I would love to market or use these.
Reply »

Mark (July 3, 2013 3:28 AM)
This is a truly fantastic bit of research. I know so many people who could use one of these sponges to remove the grease from the top of their cooking!
Reply »

David Betzer (July 3, 2013 9:30 AM)
I would think the big oil companies like BP and Exxon would be happy to invest in more research in this area since they have all had to pay huge fines for their spills and some are currently using paper towels to soak up spills from fracking. wouldn't it be great if an accident didn't result in large scale environmental disaster.
Reply »

Rusty (July 3, 2013 1:00 PM)
Couldn't they make a big looped "belt" of the sponge material (in netting or attached to a carrier belt) and then drag it continuously through the spill and through rollers on a ship to wring out the absorbed oil.
Reply »

Ed (July 18, 2013 10:36 PM)
Folks,
You might want to Google "oil absorption pads". Cheap and effective ones made from polypropylene pick up 15 times their weight and are for sale.
Reply »