Simple Reaction Could Provide Clue To Origins Of Metabolism

METABOLIC MYSTERY
[+]Enlarge
Credit: Ramanarayanan Krishnamurthy/Christopher Butch
Glyoxylic acid, can dimerize in the presence of cyanide to produce tartaric acid, which can convert to components of the citric acid cycle via known reactions. 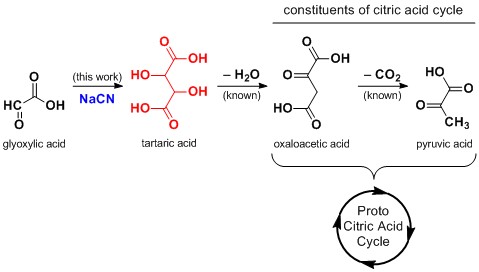 Credit: Ramanarayanan Krishnamurthy/Christopher Butch
Glyoxylic acid, can dimerize in the presence of cyanide to produce tartaric acid, which can convert to components of the citric acid cycle via known reactions.

While testing a theory about how sugars formed on early Earth, researchers stumbled upon reaction conditions that produce tartrates, molecules closely related to others in a key metabolic cycle found in most modern cells (J. Am. Chem. Soc. 2013, DOI: 10.1021/ja405103r). The chemistry could be an entry point to a prebiotic version of that cycle, the researchers say.

The citric acid cycle produces energy for cells and provides precursors for the synthesis of amino acids. Some chemists think that because the intermediates of the cycle are central to modern cell chemistry, the process could have originated from a series of common reactions between small molecules. Eventually, as life formed, enzymes in cells developed to control these reactions, according to the hypothesis. However, other chemists see the evolution of metabolic cycles from small molecule reactions as implausible, because the reactions have high energy requirements and could produce a mess of products that wouldn’t easily form a cycle (PLoS Biol. 2008, DOI: 10.1371/journal.pbio.0060018).

Nevertheless, there’s evidence that such small molecule cycles occur spontaneously, says geochemist George D. Cody, at the Carnegie Institution for Science, in Washington, D.C., who was not involved with the current work. Extracts from meteorites contain intermediates of the citric acid cycle and a variety of nonenzymatic reactions happen to produce the intermediates as well.

And now researchers have happened upon another reaction that produces molecules that could easily be converted to components of the citric acid cycle. A team led by Ramanarayanan Krishnamurthy, at THe Scripps Research Institute, and Charles L. Liotta, at Georgia Institute of Technology, made the discovery while trying to connect two glyoxylate molecules to form dihydroxyfumarate (DHF). Experiments last year showed that five-carbon sugars, similar to the one in the backbone of RNA, could be made from DHF. The researchers were searching for a possible prebiotic source of DHF.

While setting up the glyoxylate reaction, one of the chemists made a small miscalculation leading to reaction conditions that were more basic than planned. The mistake revealed a surprising product: At pH 14 in water, glyoxylate reacts with cyanide to give meso- and D,L-tartrates in 80% yield. Dehydrating tartrate gives oxaloacetate, a component of the citric acid cycle.

Christopher Butch, a graduate student at Georgia Tech who worked on the project, points out that these reaction conditions may have been possible on a prebiotic Earth. Glyoxylate, while not yet shown to form under prebiotic conditions, does form through a wide range of reaction types, suggesting it probably existed on early Earth. And mineral surfaces can provide high pH environments, he says. Next the team plans to study other possible prebiotic uses for tartrates.

In addition to the surprising product, the tartrate reaction could help the team understand their original quest for five-carbon sugars, because tartrate is the reduced form of DHF. Also, based on data they collected using nuclear magnetic resonance spectroscopy with carbon-13-labeled glyoxylate, DHF likely forms as an intermediate in the tartrate reaction. Unfortunately, the researchers could not isolate it. Next they want to figure out how to stop the reaction at DHF, Butch says.

It’s intriguing to wonder if the chemistry in cells today developed from the chemistry happening when the first cells appeared, the Carnegie Institution’s Cody says. He thinks this well-conceived, well-executed work further supports the philosophical assumption that the elements of the citric acid cycle are a “molecular fossil” that predate the emergence of life.

Origins Of Life
Iron can catalyze metabolic reactions without enzymes
Astrochemistry
Biocompatible phosphorus could have traveled to Earth on space ice﻿
Biological Chemistry
Comet collisions may have helped seed life on Earth, lab experiment shows
Share X
To send an e-mail to multiple recipients, separate e-mail addresses with a comma, semicolon, or both.
Title: Simple Reaction Could Provide Clue To Origins Of Metabolism
Author: Melissae Fellet
Chemical & Engineering News will not share your email address with any other person or company.