Natural disasters often leave survivors without access to safe drinking water. Now researchers have made a cheap, lightweight material that could help survivors get that water fast. It’s a porous gel embedded with silver nanoparticles that works like a bacteria-killing sponge (Environ. Sci. Technol. 2013, DOI: 10.1021/es401219s). The gel absorbs tainted water, kills bacteria in seconds, and releases drinkable water with just a squeeze.

A team of materials scientists and environmental engineers from Singapore and the U.S. were inspired to make the gel after seeing the effects of the Indian Ocean tsunami of 2004. Power outages knocked out automated water treatment systems and limited survivors’ ability to boil water. Filtration was a slow alternative. So the team wanted to make a fast, simple, and power-free purification method to aid in future disasters.

They chose to work with silver nanoparticles, because the materials kill bacteria effectively when they’re applied to filtration membranes. But the particles can introduce another problem as silver leaches into the drinkable water. Xiao (Matthew) Hu, a materials scientist at Nanyang Technological University and one of the leaders of the study, says the team hoped to make a material that would exploit the metal’s bacteria-killing properties but keep it from tainting the water and potentially causing unwanted health effects.

To do this, they synthesized poly(sodium acrylate) in water at low temperatures so that ice formed in spots within the resulting polymer gel. Once the team thawed and washed the material, the ice melted, leaving behind pores in the gel. Next, the researchers immersed the gel in a silver nitrate solution and then in sodium borohydride, which reduced the silver ions and decorated the pore surfaces of the gel with silver nanoparticles. The resulting lightweight, spongy material readily absorbs water and returns to its original form after being squeezed.

Silvery Sponge
[+]Enlarge
Credit: Environ. Sci. Technol.
A small piece of absorbent gel decorated with silver nanoparticles (a) soaks up water and disinfects it in 15 seconds (b). A one-second squeeze releases drinkable water (c). The gel can be used again for about 20 absorb-squeeze cycles (d). 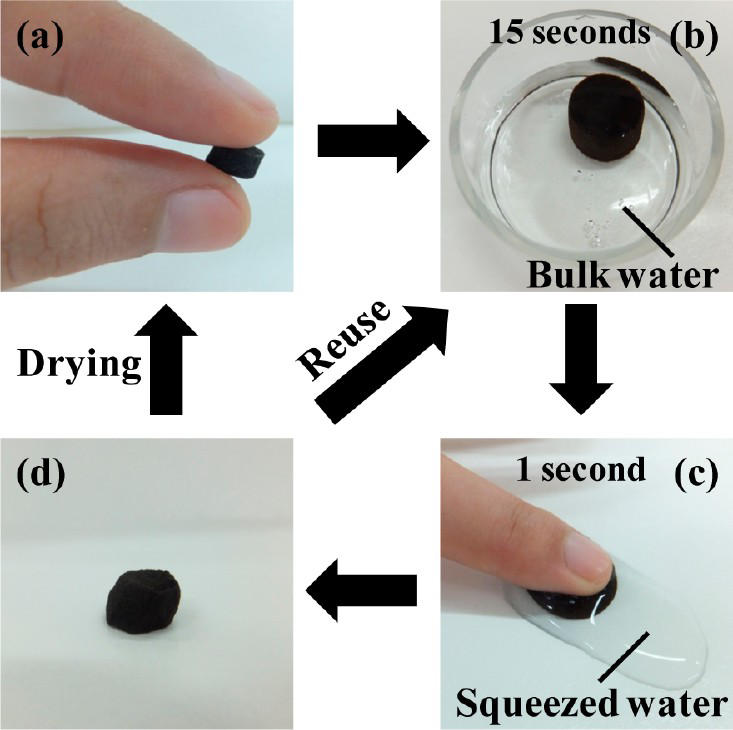 Credit: Environ. Sci. Technol.
A small piece of absorbent gel decorated with silver nanoparticles (a) soaks up water and disinfects it in 15 seconds (b). A one-second squeeze releases drinkable water (c). The gel can be used again for about 20 absorb-squeeze cycles (d).

The researchers tested the gel by using it to sop up water laced with two troublesome bacterial species, Escherichia coli and Bacillus subtilis. After 15 seconds in the gel, the amount of bacteria in the water squeezed out was 0.1% that of the original levels. When the team increased the exposure time to five minutes, the amount of bacteria in the treated water was about one-millionth that of the tainted water. With such treatment times, the team could turn unsafe water into drinkable water. What’s more, the concentration of bioavailable silver in the purified water falls within the limit for safe drinking recommended by the World Health Organization. The researchers think the gel releases little silver because the nanoparticles bind tightly to the gel’s polymeric material.

The team found that 4 g of the material—a cylinder 1.5 cm in diameter and 9 cm long—can soak up and purify half a liter of water with one squeeze. The gel can be reused more than 20 times without degrading or losing its bacteria-killing powers.

Because the gel is so light, Hu says emergency aid workers could drop the gels from helicopters after disasters occur. He envisions that individual gels could be delivered in a pocket-sized case that people could keep with them. Getting a drink would be as simple as dipping the gel in water and squeezing the water into the mouth. Making such a personal-sized gel would cost less than 50 cents, Hu estimates.

Derek G. Gray, an emeritus professor of materials science at McGill University, says the squeeze-and-release technique is ingenious. “The beauty is that the contact time between the water and the nanoparticles is controllable,” he says. “As far as I know, no one has come up with that before.” However, he notes that the team must next test the gel on pathogens in the field to make sure it works practically.

Once the researchers make larger batches of the gel, they plan to field test the method in Myanmar through an outreach program sponsored by the Lien Foundation, a philanthropic organization in Singapore. Nanyang graduate student Siew-Leng Loo, the first author of the study, is also developing an automated method to purify large volumes of water with the gel.

Comments
K.Govindarajan (August 21, 2013 1:50 PM)
Very Nuce& Useful Product for the future
Generations . Can U explain what is Nanoparticles
Please . Thanks K . Govindarajan
Reply »

(4g of the material cannot purify anywhere near half a liter in one squeeze. Please check your facts.)
Reply »

Mark Peter Sherriff (August 21, 2013 7:28 PM)
This is.. amazing. I'm thinking of the third world countries that could be helped when I say this needs to be mass produced as soon as financially viable(and isn't that always the catch?)
Reply »

Joe Champagne (August 21, 2013 9:29 PM)
"...4 g of the materialâa cylinder 1.5 cm in diameter and 9 cm longâcan soak up and purify half a liter of water with one squeeze." Is this math right? That's some impressively hydrophilic material if it can absorb 30 times its original volume in water...

Ryan Jones (August 21, 2013 9:58 PM)
Paired up with LifeStraw, they have a tremendously versatile (and greatly needed) product.
Reply »

Armand van Wijck (August 28, 2013 7:29 AM)
I'm wondering if this material also deals with other contaminants, like heavy metals? And speaking of tsunami's: how about salt? It would be great if they could further develop it to purify sea water, if not already.
Reply »