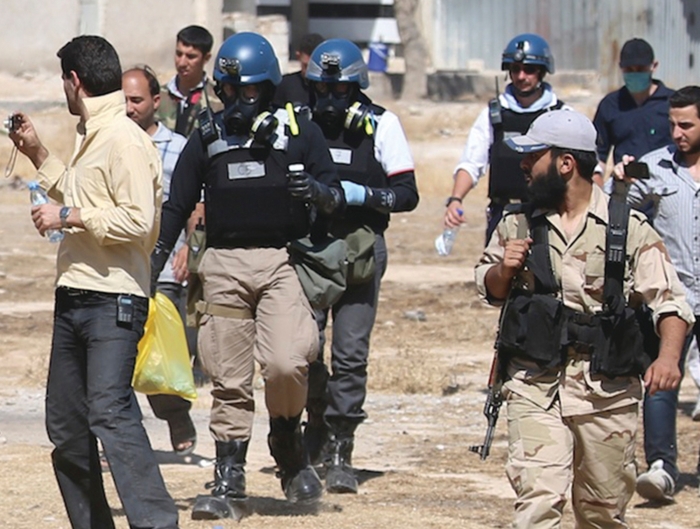 Until recently, the Organization for the Prohibition of Chemical Weapons (OPCW) was a little-recognized independent agency. On October 11, the Norwegian Nobel Committee awarded OPCW the 2013 Nobel Peace Prize for “its extensive efforts to eliminate chemical weapons.” The little-known agency helps countries uphold the international Chemical Weapons Convention (CWC), which became effective in 1997. In the ensuing 16 years, OPCW has worked with countries to dismantle and destroy chemical weapons, most recently and notably in war-torn Syria. OPCW’s science policy adviser, Jonathan Forman, is in charge of helping two important groups in the process—scientists and policy makers—understand each other. Forman, who received his Ph.D. in physical organic chemistry from California Institute of Technology in 1996, started his tenure at OPCW only seven months ago. C&EN’s Elizabeth K. Wilson talked with Forman about the Nobel Prize, mastering the art of international science communication, and the importance of chemistry research as part of OPCW’s mission.

C&EN: How did you find out about OPCW winning the Nobel Prize?

Forman: We knew we had been nominated, and we knew something was going on because my boss is Norwegian and was contacted by a Norwegian news agency about the nomination. We were saying, “Wouldn’t it be great, but it seems pretty unlikely.” But it was a very pleasant surprise. I never once thought that I’d be associated with a group that won a Nobel Peace Prize. After you hear that you’ve been awarded the prize, you think about what it means. This is really the work of thousands, if not tens of thousands, of people. The current staff is around 500, but through the history of the organization you have all the people who negotiated the treaty in the 1970s and 1980s, and those who worked both for and alongside OPCW across the nations of the world. Think of all the staff who have been involved in this organization—and we also have our member states and their delegations and a scientific advisory board.

C&EN: How might the increased visibility of the Nobel Peace Prize affect OPCW’s operations?

Forman: This gives us recognition that the work of the organization and its mission is very important. OPCW is state-member funded, so whether or not we have a Nobel Prize, member states will fund operations that are needed. There were already member states putting money into a Syria trust fund because that clearly wasn’t part of our budget a year ago. But now, having the Nobel Prize may make it easier for us in the future when we face challenges that need additional funding.

C&EN: What is your role as OPCW’s science policy adviser?

Forman: I sit at the interface between international diplomacy and scientific expertise. It’s interesting because as a disarmament organization we are thought of as governmental, yet the treaty is underpinned by science and technology. You could not have a disarmament treaty for chemical weapons without very strong scientific expertise. Many of the people doing inspections and verifications have Ph.D.s in chemistry or chemical engineering. What’s different about a policy adviser versus an inspector is that inspectors are in the field collecting data. They’re doing analytical chemistry as part of their job. But they’re not the ones discussing policy options with diplomats. We have a scientific advisory board composed of 25 scientists from around the world and delegations from our 190 member states. I act as a translater between scientists and policy makers. The language of science is common across all sciences, and it is easy to speak about technical details, while many of the policy makers are generalists and may need to understand not just the technical aspects but also the consequences of making a change to a policy because of a technical consideration. Bridging this gap can be somewhat challenging at times.

C&EN: What scientific challenges does OPCW face in carrying out its mission?

Forman: Science and technology continues to evolve, and new discoveries and change take place all the time. So one of the tasks of OPCW’s scientific advisory board is to monitor scientific developments and provide advice on how that may affect implementation of CWC. For example, in the verification annex of CWC, a criterion that can subject a chemical production facility to inspection is that chemicals are produced by synthesis. But if you look at changes in chemical production over the last few decades, biologically mediated processes are now more widely used in industrial-scale manufacturing, and these methods might not be considered synthesis from some points of view. So how do you enact that into policy? The scientific advisory board made a recommendation saying any process designed for the formation of a chemical substance, including biologically mediated processes, should be covered by the term “produced by synthesis.” OPCW Director-General Ahmet Üzümcü acknowledged this and said he would propose policies that ensure consistency between member states for declarations under the verification regime.

C&EN: What would you like chemists to know about what OPCW does?

Forman: While we talk about weapons that have been destroyed and verification to ensure nonproliferation, there’s also language in CWC that promotes peaceful uses of chemistry and international collaboration. That can be important if you think about disarmament. Having chemists sharing information and collaborating on research across international borders is one way to show trust between nations. OPCW has assistance programs that provide support for chemical research, conference attendance, laboratory equipment, and internships. That in itself helps promote a peaceful world.

Mark White (November 19, 2013 5:59 PM)
Congratulations Jonathan and the rest of the group, you are doing some really fantastic work!
Reply »