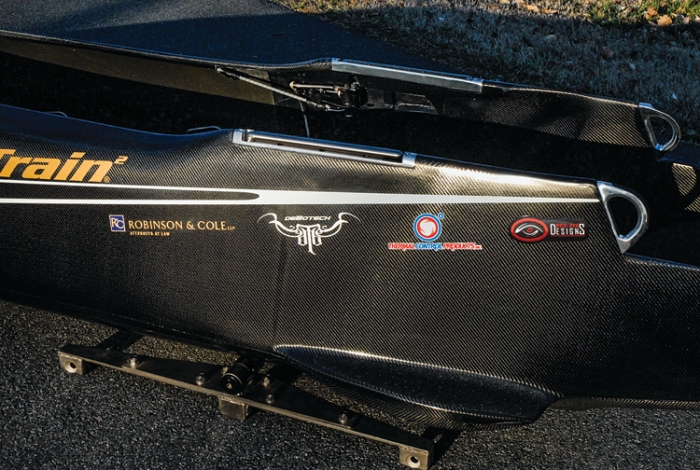 It’s hard not to get caught up in the excitement of the Olympics. Newscripts recently reported how advanced polymeric materials supplied by Dow Chemical were helping Team USA build state-of-the-art luge sleds (C&EN, Feb. 10, page 40). Dow provided polymers that went into the luge kuffens, which are the pieces of the sled that hold the pod (where the athletes ride) to the steel blades that contact the ice.

But there’s more. Luge athletes weren’t the only ones to achieve better sliding through chemistry. U.S. bobsled and skeleton athletes made Americans proud by earning six medals at the Sochi Olympics—two silver and four bronze. So Newscripts will stay on the bandwagon, or rather the sled, and ramble on about the technology that played a part.

Engineering firm deBotech helped in the medals race by producing durable, lightweight carbon-fiber parts for some of the U.S. sleds. For example, deBotech partnered with former NASCAR driver Geoff Bodine to build the “Night Train 2” four-man bobsled, which garnered a bronze medal.

“Knowing that our carbon-fiber parts and composites likely played a role in the outcome of events where speed is the name of the game is amazing,” says Hans deBot, a mechanical and aerospace engineer and founder of deBotech.

Materials science isn’t just for Olympic athletes. Couch potatoes will soon be able to sit and enjoy advanced materials technology while watching the Olympics, with LiquiGlide. This surface treatment technology creates superslippery surfaces so that your favorite squeezable foods and condiments will easily slide out of the bottle. With slick-as-a-whistle action, armchair enthusiasts can avoid hand cramps, better hit the targets on their plates, and reduce food waste.

The surface treatment can be used with any type of plastic container. Ketchup comes to mind, but also toothpaste, laundry detergent, or lotion. No more pounding the end of the ketchup bottle, dealing with a sloppy peanut butter knife, shake-shake-shaking a shampoo bottle, or cutting the end off of a lotion bottle to get the last drop.

LiquiGlide was invented by Massachusetts Institute of Technology’s Kripa K. Varanasi and his research group. Here’s how it works: Varanasi’s team developed a process to make bottles with a nanotextured surface impregnated with a lubricating liquid. The concept is similar to the “lotus effect” that other materials scientists have used to create nonwetting superslick surfaces. 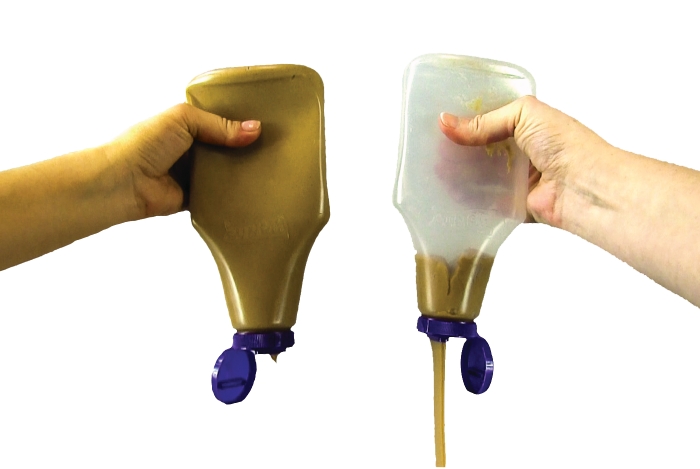 The lotus effect works because tiny air pockets on an irregular hydrophobic surface interrupt contact between a liquid and the surface, allowing the liquid to float across like an air-hockey puck. With LiquiGlide, the lubricating liquid substitutes for the air pockets.

The lubricant, held tight to the nanotextured surface via capillary forces, is selected to be immiscible with the contents of the bottle. The extreme difference in surface tension between the lubricant and stored ketchup or lotion collaborates with gravity to keep the product moving. The lubricating liquid could be silicone oil, an ionic liquid, or vegetable oil, depending on the product being stored in the container. The company expects the first consumer products with its coatings to hit store shelves in early 2015.

“What the wheel was to transportation, LiquiGlide is to liquids—it changes how liquids move,” the company says. Newscripts proposes that LiquiGlide team up with deBotech and other sled makers before the 2018 Winter Olympics in Pyeongchang, South Korea. More composites, slicker surfaces, more medals, and more cheering back home.

Credit: ACS Nano
Slippery: This schematic shows the structure of the nanotextured, nonwetting surface that allows substances to slide out of containers.

Consumer Products
What’s ski wax, and how does it help us schuss down the slopes?
Biomaterials
Chemistry in Pictures: Synthetic springtail﻿
Materials
Wrinkling Teflon creates a superhydrophobic surface
Share X
To send an e-mail to multiple recipients, separate e-mail addresses with a comma, semicolon, or both.
Title: Materials Science For Athletes And Couch Potatoes
Author: Stephen K. Ritter
Chemical & Engineering News will not share your email address with any other person or company.