A look at recent patenting activity in electrode materials for lithium-ion batteries, brought to you by C&EN and CAS

by Brought to by C&EN and CAS

In 1991, Sony rolled out the first commercial rechargeable lithium-ion battery. Soon after, patenting activity for Li-ion battery technology exploded. In such batteries, a conductive electrolyte shuttles Li+ between the positive electrode (cathode) and negative electrode (anode) during charging and discharging. Small, lightweight Li-ion batteries are now found in many small portable electronics. But there’s still room for improvement: Li-ion batteries do not charge as fast as other battery technologies. They also have limited power densities. Much of the current patenting in this area revolves around the development of more efficient electrodes, according to a recent analysis by the American Chemical Society’s Chemical Abstracts Service. Here we highlight a few of the many strategies battery scientists are pursuing.

Jump to Topics: - Nanotubes Give Electrodes A Boost - Silicon Surpasses Carbon - 3-D Is Better Than 2-D 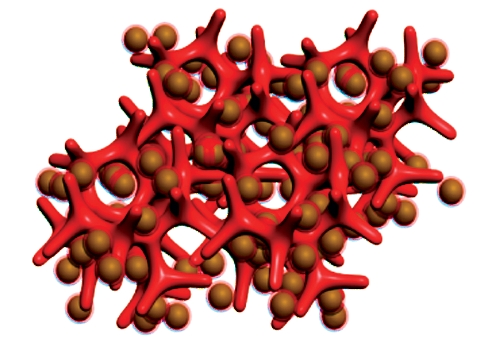 Nanotubes Give Electrodes A Boost

With Li-ion batteries, increasing the interfacial surface area between cathodes and anodes typically boosts power density and charging rate. A 2012 patent application outlines another strategy: dope the electrodes with carbon nanotubes (WO 2012159111). Ahmed Busnaina and colleagues at Northeastern University describe electrodes built on a carbon nanotube scaffold coated with a layer of a nanoparticulate electrochemically active substance. Thanks to the electrodes’ alternating layers of carbon nanotubes and nanoparticles, Li-ion batteries built from them have a power density 100 to 10,000 times as great as that of conventional Li-ion batteries, the researchers claim. Even with these improvements in charge density, there is no sacrifice in charging and discharging rates. Instead, the researchers claim charging rate improvements of up to 100 times that of conventional electrodes.

[+]Enlarge
There has been a dramatic rise in patents related to lithium-ion batteries since 1984. 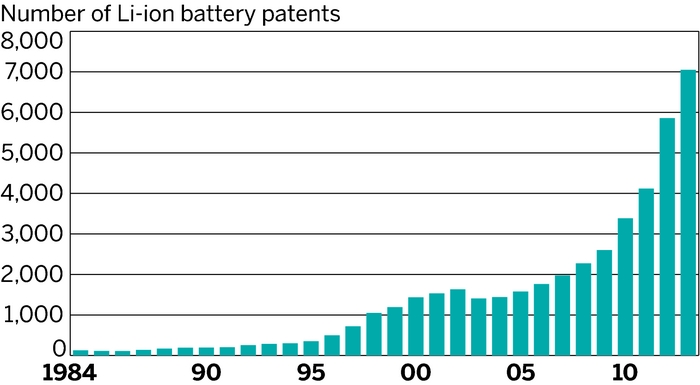 There has been a dramatic rise in patents related to lithium-ion batteries since 1984.

Graphite is the most common anode material used in Li-ion batteries. But its energy density is limited, making silicon—with a charge storage capacity more than 10 times that of carbon—an appealing alternative. Si-based anodes, however, have their own problems. When Li-ion batteries incorporating such anodes are charged and discharged, silicon particles embedded in the anodes expand and crack, destroying vital electrical connections. Researchers at Stanford University and Nanjing University, in China, hope to rectify this shortcoming. In a 2014 patent application, Stanford’s Zhenan Bao and Yi Cui and their colleagues offer up a novel polymerization strategy as a solution (WO 2014026112). Si-based anodes are normally made by fashioning a matrix of silicon and carbon particles and then wrapping it in a polymeric material. Instead, the team seeded silicon nanoparticles into a conducting polymer hydrogel as it was forming. The result is a highly interconnected 3-D polyaniline network featuring embedded silicon nanoparticles coated in the polymer. Li-ion batteries that incorporate anodes made of this Si-based material boast a high storage capacity through 5,000 cycles of charging and discharging, the researchers report. 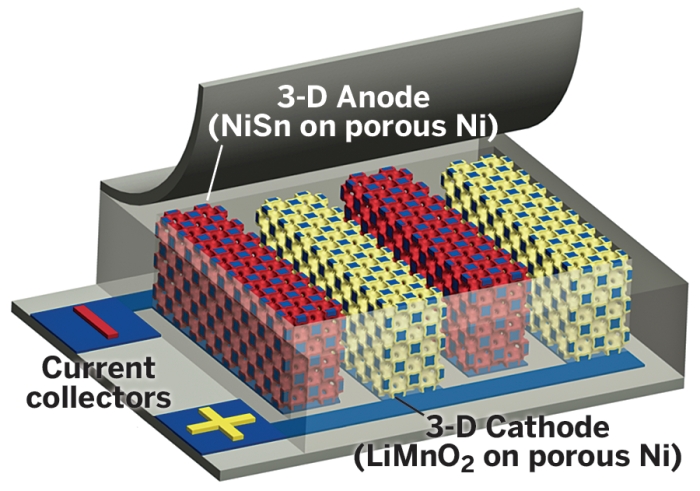 Imagine computer chips containing tiny, embedded batteries. Miniature Li-ion battery designs under development at the University of Illinois, Urbana-Champaign, could one day make that possible. A 2013 patent application from Paul V. Braun, William P. King, and James H. Pikul describes a method for fabricating microscale batteries with porous three-dimensional electrodes (WO 2013019489). Compared with standard electrodes, porous 3-D electrodes have a far larger surface area. This makes room for more chemical reactions to take place, expediting the free flow of electrons and lithium ions, boosting both discharge and recharge rates. Taking inspiration from a fast-charging cathode developed by Braun, the researchers built a matching anode and then designed a way to integrate the two components to create a microscale battery. Even when the cathode and anode use entirely different chemistries—say porous nickel coated with LiMnO2 or a NiSn alloy—the researchers managed to fabricate the microscale electrodes in close proximity on a single substrate. Not only do the tiny batteries pack in more power than competing technologies, but they also can be recharged 1,000 times as fast. They could potentially power personal electronics as well as miniaturized medical implants and distributed sensor networks, the researchers suggest.

Jump to Topics: - Nanotubes Give Electrodes A Boost - Silicon Surpasses Carbon - 3-D Is Better Than 2-D

2-D Materials
MXene membranes could be an affordable way to harvest energy from saltwater
Energy Storage
Solid electrolyte extends life of sodium-sulfur battery
Materials
Moving Toward Invisible Batteries
Share X
To send an e-mail to multiple recipients, separate e-mail addresses with a comma, semicolon, or both.
Title: Patent Picks: Lithium-Ion Batteries
Author: Brought to by C&EN and CAS
Chemical & Engineering News will not share your email address with any other person or company.