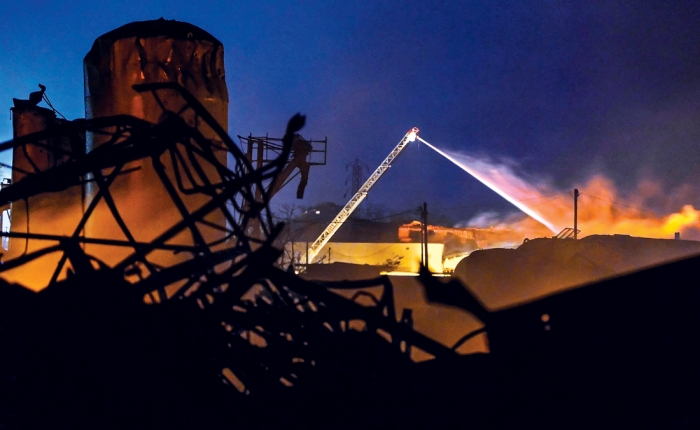 Credit: Newscom
The aftermath of the April 17, 2013, fertilizer facility explosion in West, Texas.

On the one-year anniversary of the West Fertilizer Co. explosion, the Chemical Safety & Hazard Investigation Board (CSB) returned to the West, Texas, community where the retail fertilizer warehouse had been located. There, at a public meeting on April 22, CSB released its preliminary accident report that proposes changes to federal laws overseeing reactive chemicals.

CSB’s investigation found severe shortcomings in existing regulations and standards for ammonium nitrate at the federal, state, and county levels as well as a “failure by the company to take necessary steps to avoid a preventable accident,” CSB Chairman Rafael Moure-Eraso said.

The West accident occurred when some 40 to 60 tons of ammonium nitrate fertilizer held in a wooden building caught fire and exploded, killing 14 people—12 volunteer firefighters and other emergency responders and two residents. Another 226 citizens of West were injured. Some 150 homes were destroyed by the blast, and twice that many were damaged. An apartment complex, three schools, a nursing home, and a hospital were also damaged.

Moure-Eraso noted that Texas lacks a statewide fire code, which could have encouraged county fire departments to closely monitor safe storage and handling of chemicals. Such codes, CSB said, could have also kept populations away from hazardous facilities, such as the warehouse.

The CSB investigation found that the community was largely unaware of the threat posed by the supply of ammonium nitrate in the warehouse, as well as another 100 tons that was held in a railcar adjacent to the facility. When built in 1961, the warehouse was surrounded by open fields, but CSB said that, over the years, homes, schools, and other buildings had been located nearby.

In its investigation, CSB found that throughout the nation some 1,351 facilities, similar to the one in West, held ammonium nitrate fertilizer. Most are in 10 southern agricultural states.

CSB proposed changes to federal laws, including adding reactive chemicals, such as ammonium nitrate, to substances regulated by the Environmental Protection Agency and Occupational Safety & Health Administration. It also recommended inherently safer design principles be required for these facilities.