Pollution: Chemicals in consumer products can end up deep in fields fertilized with sewage sludge 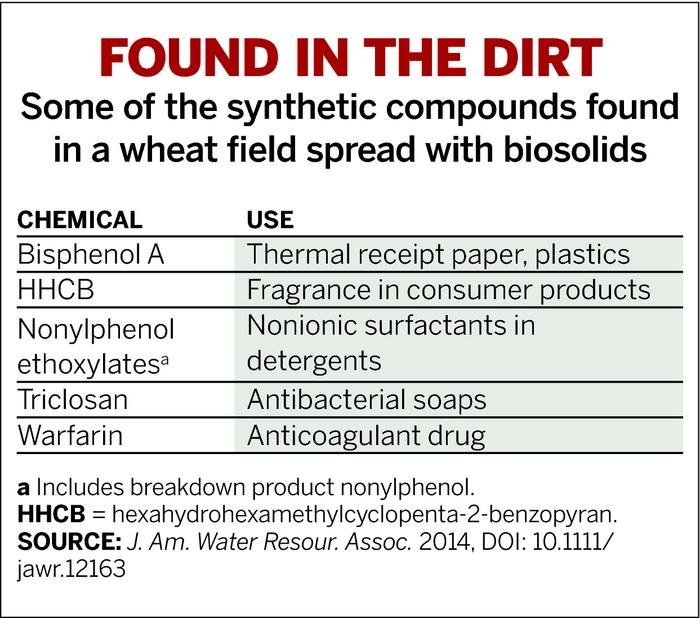 Many synthetic chemicals used in consumer products including laundry detergents and prescription drugs end up in sewage. Scientists have long known that some of these everyday chemicals pass through wastewater treatment plants unchanged and get released to surface waters, creating a major route for entering the environment.

Now, researchers have found that compounds in consumer products that go down the drain can move downward through soil after land is fertilized with treated sewage sludge, says a federally funded study from the U.S. Geological Survey and Colorado State University, Pueblo (J. Am. Water Resour. Assoc. 2014, DOI: 10.1111/jawr.12163).

In the study, researchers chose 57 chemicals, including detergent components, fragrances, flame retardants, and prescription drugs, collectively called “contaminants of emerging concern.” These substances aren’t regulated in water because their risk to human health and the environment isn’t known, according to EPA. Wastewater treatment plants aren’t designed or required to remove them.

They checked for these chemicals in a cultivated eastern Colorado farm field. The field had not been fertilized with treated sewage sludge, called biosolids, or with manure. They also analyzed biosolids for the presence of these substances. In collaboration with a farmer, they applied those biosolids, worked them into the soil to a depth of between 6 and 12 inches, planted wheat, and monitored the field for these chemicals. Precipitation in the arid region provided the only water to the field.

After 16 months, the researchers found that about a dozen of the chemicals had migrated as far as 50 inches down into the soil. The wheat plants took up small amounts of the substances.

Study coauthor Edward T. Furlong, a USGS research chemist, says the findings are expected to spur further research into how contaminants of emerging concern move through the environment.

Data on how the application of biosolids spreads these substances in the environment would inform EPA’s ongoing assessment of many of these substances for possible regulation. U.S. wastewater treatment plants produce about 8 million dry tons of biosolids each year, EPA estimates. About half is spread on crop fields, parkland, and reclaimed mining sites.

Atmospheric Chemistry
Study suggests that sea spray plays an important role in spreading perfluoroalkyl acid pollutants into the air
Environment
Septic System Forensics
Environment
EPA Said To Allow Discharge Of Hazardous Chemicals To Rivers And Lakes From Sewage Plants
Share X
To send an e-mail to multiple recipients, separate e-mail addresses with a comma, semicolon, or both.
Title: Down The Drain Doesn’t Mean They’re Gone
Author: Cheryl Hogue
Chemical & Engineering News will not share your email address with any other person or company.

Comments
Mickleby (May 21, 2014 10:57 PM)
I spoke up at my local grcery when a pharm tech told me to flush meds. I loudly said the hand cleaning alcohols are in our waterways aready.
The pharms heard me and scheduled a bring your meds event.

for me soap and water. I have been looking for greener cleaners.
Reply »