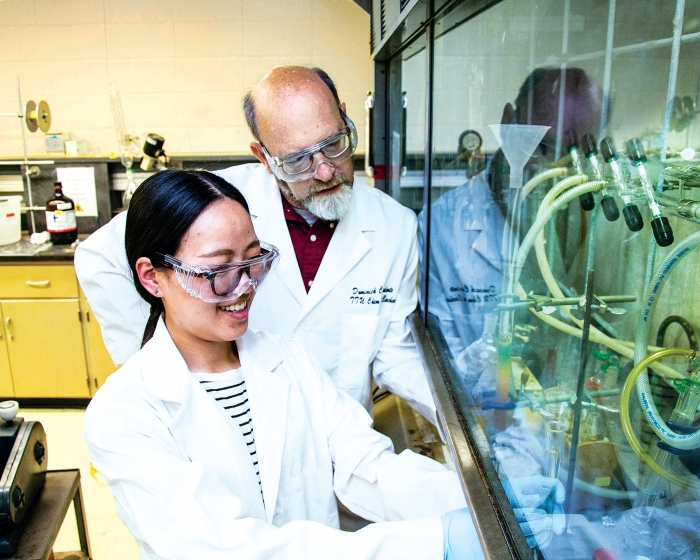 When it comes to training students and postdoctoral researchers to work safely in academic laboratories, it is hard to overemphasize the importance of the head of the lab—the principal investigator (PI).

“The PI sets the tone for how a lab is going to act and operate,” says Dominick J. Casadonte Jr., a chemistry professor at Texas Tech University. “If the PI is very safety conscious and has safety as a priority, then students and professionals in the lab will also have it as a high priority.”

PIs who do make safety a priority say that their mentoring in this area starts on the day that they accept someone into their labs and continues throughout their advising relationship. Running their labs safely is not just about meeting regulatory requirements, they add—it is about making sure their group members think about their experiments with safety in mind.

Safety-conscious faculty members try to set that tone in an initial meeting with new members of their groups. Such meetings usually include a conversation about the particular hazards associated with work in the lab, an introduction to the lab’s safety manual, and a tour of the lab that includes finding emergency equipment, such as showers and eyewash stations.

Initial meetings also typically include discussion of expectations. It’s important to remember that lab members are trainees, says Rick L. Danheiser, a chemistry professor at Massachusetts Institute of Technology and chair of his department’s safety committee. He and his colleagues believe that their graduate students and postdocs should be able to perform most experiments. But they also expect their group members to seek help from their supervisors if they need it. “One responsibility of a PI is to be available to have discussions when a coworker has any doubt about how to do things safely,” Danheiser says.

Andrew L. Zydney, head of the chemical engineering department at Pennsylvania State University, takes a similar approach with his group members. “They should never be working on something when they’re not comfortable with the potential hazards,” Zydney says. If his students feel unsure about what to do, he tells them to stop and wait to discuss the experiment with him. Whatever they’re working on, “it can wait until tomorrow,” he says.

Beyond initial meetings and verbally setting expectations, PIs follow up with their groups in different ways. One approach is to stay aware of the experiments people are doing and use the opportunity to discuss experimental techniques. “The first time someone is going to use sodium metal, I’ll talk with them about different ways of handling it,” says Craig A. Merlic, a chemistry professor at the University of California, Los Angeles, and chair of his department’s safety committee.

Some professors make students write out an experimental protocol or emergency response plan. “Especially if they’re a first-year graduate student, I’ll tell them to write out for me a plan for waste disposal and what they’ll do if they spill to make sure they’re aware of the hazards,” says Scott E. Denmark, a chemistry professor at the University of Illinois, Urbana-Champaign, who is leading an effort to improve his department’s safety culture.

And some faculty do experiments with students one-on-one. “I’m very much a mother hen at least for the first couple of months. I go through every single procedure in the lab with my students,” says Casadonte, who chairs his department’s safety committee.

Even PIs who aren’t as hands-on as Casadonte keep vigil over their labs. “I stick my head in everybody’s hood when I go through the lab,” Denmark says. If he sees a setup he doesn’t like or someone using glassware with a broken edge, he’ll discuss it with them. He also makes sure everyone is wearing lab coats, eye protection, and other protective wear, and he will flag things like a solvent bottle sitting on the floor.

In Danheiser’s department, that awareness extends beyond his own lab. At MIT, the organic chemistry labs have glass walls along the corridor. If he or another faculty member walking the halls spies someone without a lab coat or eye protection, they’ll often knock on a window or go in to discuss the matter, Danheiser says.

Faculty also bring up safety in group meetings, either regularly or as necessary. At Merlic’s weekly meetings, “at the start we talk about safety for two to 15 minutes,” he says. Topics might include a particular technique related to group experiments or a review of an accident, with discussion about why it happened and how it could have been avoided.

In addition to the more routine interactions of lab checks and group meetings, lab groups at MIT hold annual safety refresher training, Danheiser says. Merlic has his lab safety officer do walk-throughs to make sure his lab stays on track between institutional inspections. Zydney does an annual self-inspection. Denmark holds twice-yearly lab clean-outs, and he is also implementing an electronic lab notebook system that will ask students to review procedures for handling particularly hazardous reagents.

And when Casadonte’s group got a new glove box last year, he had his group members go through a “what if” analysis to discuss everything that could possibly go wrong with it, and how either the box was built with engineering controls to prevent problems or how users could avoid them. He’s since encouraged his students to apply the thought process to other equipment, such as distillation columns and Schlenk lines for handling air-sensitive materials.

In the end, the important thing to remember about mentoring for safety, PIs say, is to make it an everyday thing. “It’s not an extra because inspections are coming up or certain paperwork needs to be done,” Zydney says. “Safety just becomes part of what one does in the laboratory.”

Lab Safety
I thought it would never happen to me
Employment
The unwritten rules of sharing in the laboratory
Safety
How educators are teaching students to assess risk in the lab
Share X
To send an e-mail to multiple recipients, separate e-mail addresses with a comma, semicolon, or both.
Title: Chemistry Professors Promote Lab Safety
Author: Jyllian Kemsley
Chemical & Engineering News will not share your email address with any other person or company.