Nanotechnology: 92% of nanotubes generated with a new protocol have identical geometry, conductivity

[+]Enlarge
Credit: Nanomaterials & Nanostructures Group/Peking U
To seed the growth of highly uniform carbon nanotubes (gray), researchers use tungsten-cobalt alloy nanocrystals (yellow and orange), as shown in these side- and top-view illustrations. 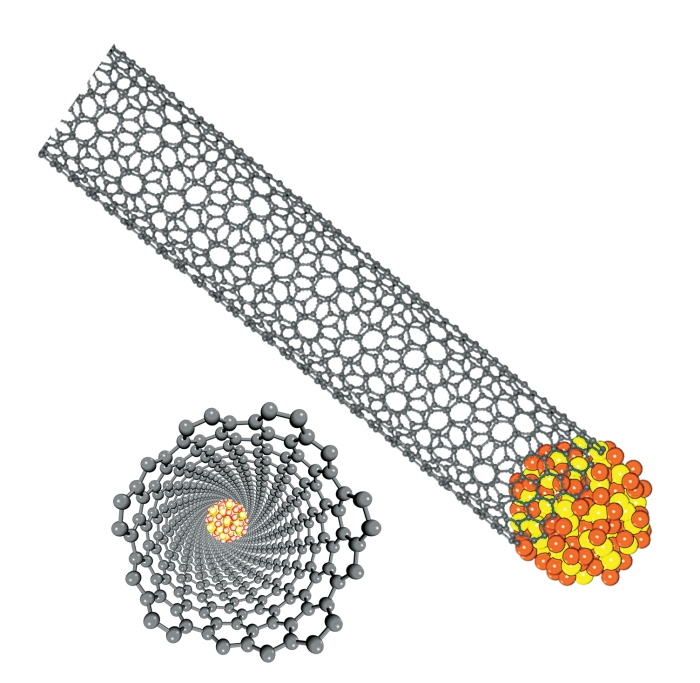 Credit: Nanomaterials & Nanostructures Group/Peking U
To seed the growth of highly uniform carbon nanotubes (gray), researchers use tungsten-cobalt alloy nanocrystals (yellow and orange), as shown in these side- and top-view illustrations.

Because of their strength, flexibility, and conductivity, carbon nanotubes might one day feature prominently in devices such as solar cells and miniaturized electronic circuits. Standard methods used to grow the tiny cylinders, however, typically produce a mixture of tubes with varying carbon-atom geometries and electrical properties, making their incorporation into gadgets problematic.

Now, Yan Li of China’s Peking University and coworkers have grown a batch of single-walled carbon nanotubes that are 92% pure (Nature 2014, DOI: 10.1038/nature13434). The tubes in this pure portion have a single geometry—also known as chirality—so they behave identically: In this case, they have a uniformly high electrical conductivity, acting like metal wires.

To accomplish the high-purity growth, Li says her team found the “right recipe” for the nanocrystal catalysts that are used to seed nanotube growth. “People have long been thinking about using the structure of the catalyst to template the structure of nanotubes,” she says. But the best nanotube purity achieved previously was only 55%.

Her group succeeded where others failed, Li says, because it synthesized uniform tungsten-cobalt alloy nanocrystal catalysts that are stable at the high temperature needed to synthesize nanotubes. During the growth process, a silicon wafer decorated with nanocrystals gets heated to 1,030 °C. Ethanol flowing over the wafer vaporizes, its carbon atoms sticking to the nanocrystals and eventually forming cylindrical lattices.

The way the tungsten and cobalt atoms pack together on the faces of the nanocrystal catalysts is essential for producing highly pure nanotubes, Li explains. Where the carbon atoms stick to the crystal facets dictates what nanotube geometry emerges.

“Li and coauthors have made a major breakthrough,” says Mohan Sankaran, a chemical engineer who studies nanotube growth at Case Western Reserve University. “Their approach will help realize the immense potential of carbon nanotubes.”

The researchers believe they can increase nanotube purity to above 99% by further manipulating the composition, structure, and size of their nanocrystal catalysts. Li says they’ve already adjusted their patented protocol to grow high-purity tubes of an entirely different geometry that behave like semiconductors.