A look at recent patenting activity in graphene-based electronics, brought to you by C&EN and CAS

UP AND COMING
[+]Enlarge
The number of patents involving graphene has exploded in recent years. 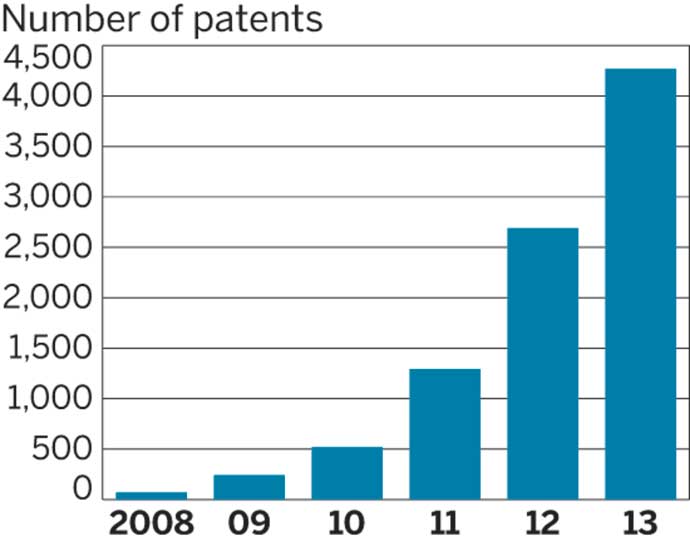 The number of patents involving graphene has exploded in recent years.

Jump to Topics:
- Rapid temperature sensors
- Protection from power loss
- A replacement for silicon in transistors

Graphene has captured scientists’ imaginations since 2004, when University of Manchester physicists Andre K. Geim and Konstantin S. Novoselov described a straightforward method for isolating single layers of the material. Their experiments underlined graphene’s promising electronic characteristics, and interest in the one-atom-thick planar sheets of sp2-bonded carbon atoms grew rapidly. The past few years have seen a surge in patent applications for graphene-based electronics, according to data from Chemical Abstracts Service databases. A few such applications are highlighted here. 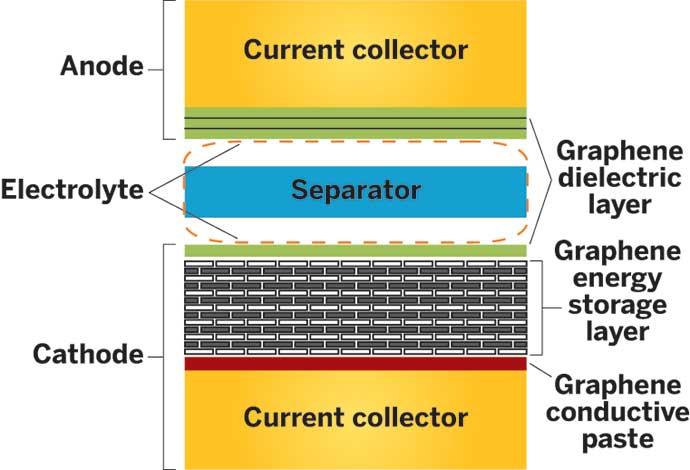 Flexible graphene films could be the key to rapid temperature sensors that optimize battery life, according to a recent patent from researchers at Stevens Institute of Technology (U.S. 20140103298). Using ink-jet printing techniques, materials science professor Woo Lee, graduate student Linh Le, and research assistant De Kong printed graphene oxide micropatterns on a variety of flexible polymer substrates. Subsequent reduction resulted in a flexible graphene film. These graphene films have a negative temperature coefficient (NTC); that is, their electrical resistance decreases as temperature increases, making them attractive for use in temperature sensors. To demonstrate, the researchers held a human finger to their graphene film and measured how long it took the film to detect the resulting increase in temperature. Their film’s temperature-sensing response time is an order of magnitude faster than that of traditional NTC materials based on metal oxide, they claim.

A replacement for silicon in transistors

All electronic equipment is subject to interruption and damage from variations and outages in power. So researchers are looking for ways to provide such equipment with sufficient internal energy storage to last through the duration of a power interruption. Traditional electrolytic capacitors can back up equipment that normally requires hundreds of volts. But their energy storage capacity is typically in the microfarad range—far lower than the kilofarad range of supercapacitors. Supercapacitors, however, can’t provide the same voltages as traditional capacitors. Graphene could provide the best of both worlds, according to Thor E. Eilertsen, chief technology officer at capacitor manufacturer Custom Electronics. The firm recently described a graphene-based electrolytic capacitor that continues operating satisfactorily even after providing backup power for up to two to three seconds (U.S. 20140111906). The device’s novel graphene dielectric layer is made from stacked single-layer graphene films. Successive layers of graphene compensate for defects such as voids in individual layers to achieve the desired dielectric characteristics. The device also features an energy storage layer made from stacked sheets of graphene platelets. Eilertsen matched the pore size in these stacks to the ion size of the capacitor’s electrolyte, ensuring that maximum energy can be stored and then dissipated when needed.

Jump to Topics:
- Rapid temperature sensors
- Protection from power loss
- A replacement for silicon in transistors

As electronics makers look for ways to pack more and more computing power into a smaller chip, silicon-based transistors eventually aren’t going to cut it. Fast and tiny, transistors built from graphene are a promising alternative. But there’s one problem: Graphene has no band gap. At low energies, semiconductor materials used in transistors act as insulators. Add a small amount of energy, and electrons flow freely. The difference between these energies is called the band gap. Silicon’s band gap makes it ideal for use in transistors—it conducts current quickly but doesn’t dissipate energy or leak current when not in use. But with graphene’s zero band gap, electrons flow freely through graphene’s lattice at any energy level. Scientists have tried to get around this by doping graphene to simulate band gap. Materials science and engineering professor Chun-Wei Chen and graduate student Po-Hsun Ho of National Taiwan University describe a transistor built from graphene doped with titanium oxide (U.S. 20140158988). They claim that the transistors perform better than those doped in other ways. What’s more, sealing the graphene layer with the doping layer greatly improves the transistor’s stability in air and in humid environments.

Share X
To send an e-mail to multiple recipients, separate e-mail addresses with a comma, semicolon, or both.
Title: Patent Picks: Graphene-Based Electronics
Author:
Chemical & Engineering News will not share your email address with any other person or company.