With strong support from the Department of Homeland Security (DHS), momentum is building in Congress for a multiyear extension of the federal program that aims to safeguard the nation’s chemical facilities from the threat of terrorist attack.

Earlier this month, the House of Representatives passed legislation (H.R. 4007) that would codify the Chemical Facility ­Anti-Terrorism Standards (CFATS) into law and extend the DHS-run program through fiscal 2017. The bipartisan bill, sponsored by Reps. Patrick Meehan (R-Pa.) and Gene Green (D-Texas), was approved on a voice vote. Similar legislation is being drafted by a Senate committee. 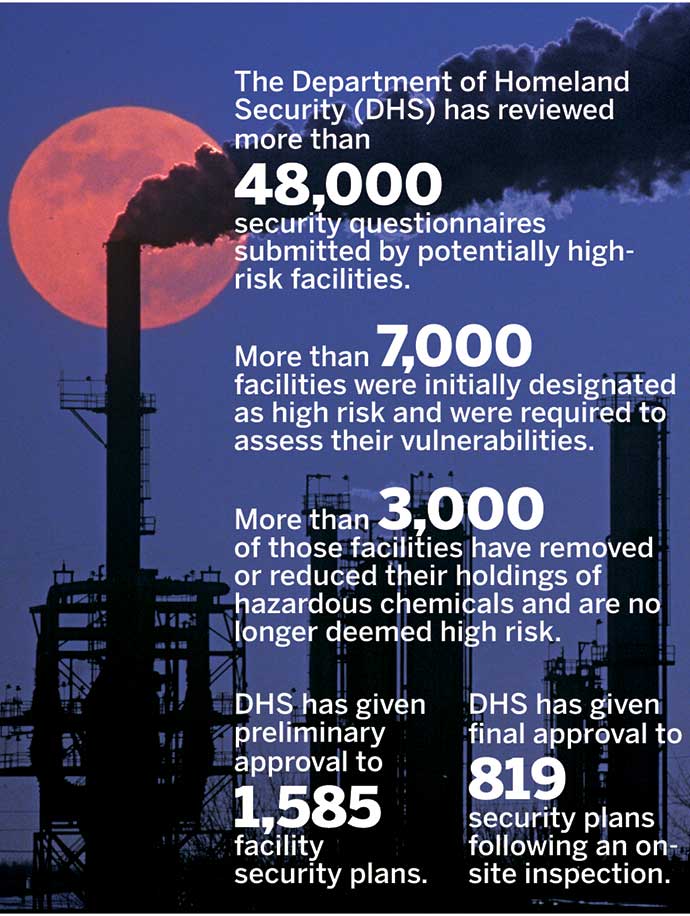 CFATS requires facilities with greater than threshold amounts of certain hazardous chemicals to conduct vulnerability assessments, develop site security plans, and submit these documents to DHS for review. After the plans are implemented, inspectors verify that the facilities have put the new security measures in place.

The program was established in mid-2007, in response to a directive to DHS from Congress to create a security program for high-risk chemical facilities in an amendment to the department’s funding bill.

DHS for the past seven years has been operating CFATS on temporary authority provided by annual appropriations bills. Management problems and delays in approving facility security plans have made lawmakers reluctant to pass freestanding legislation that would formally authorize the program and puts CFATS on firmer ground.

As a result, Congress has had to renew CFATS each fiscal year through the spending bill that funds the myriad programs that DHS carries out.

In that respect, CFATS is unlike most regulations the chemical industry must abide by, says William E. Allmond IV, vice president of government and public relations at the Society of Chemical Manufacturers & Affiliates, a trade group representing mostly small and midsize specialty chemical makers.

“In CFATS’s case, appropriating money for the program authorizes it; CFATS cannot be authorized unless it’s appropriated,” Allmond notes. “It’s a really weird situation.” And it has created problems for both DHS and the chemical industry.

The program got off to a rocky start and made little progress until recently. Two years ago, DHS hadn’t approved a single facility site security plan. After a new management team took over and overhauled procedures, more than 800 security plans have been approved in the past 18 months. Still, it’s expected to take at least another three years to review security plans and conduct compliance inspections at all of the more than 4,000 high-risk facilities covered by CFATS.

“The improvements that have been made have accelerated the pace of approvals, and we are continuing to identify and explore options to enhance the program,” says Suzanne E. Spaulding, undersecretary of DHS’s National Protection & Programs Directorate, the division that oversees CFATS. “A long-term authorization is probably the single most important thing Congress could do to advance this program.”

Chemical facility operators “deserve to know that the program will not be allowed to lapse” before they make significant financial investments in CFATS-related security improvements, Spaulding says. Uncertainty about the future of the program could also encourage some companies “to ignore their responsibilities” if they think Congress might terminate CFATS in the near future. DHS isn’t aware of any companies purposefully avoiding compliance, she adds.

Chemical manufacturers say they support CFATS and want to comply with its requirements, but they need a stable and predictable program.

“It would help my company and others like it if Congress would ensure CFATS’s continued stability through a longer-term authorization like H.R. 4007 would provide,” says Kate Donahue, president of Hampford Research, a specialty chemical company in Stratford, Conn.

The legislation approved by the House “simply codifies what was in the original spending bill that established the program and removes the program from the annual funding fire drills,” Donahue says.

Renewing CFATS for multiple years would more closely align the security initiative with the industry’s capital-planning process and “allow some certainty for industry to take action,” adds Timothy J. Scott, chief security officer at Dow Chemical. At many companies, capital planning and budgeting for security improvements run on a three- to five-year cycle.

Scott also points out that a multiyear authorization would bring stability to DHS in planning and implementing CFATS and also help the department recruit and retain top talent to effectively oversee the program.

Last October, the federal government partially shut down for 16 days after lawmakers could not agree on a new federal budget. The CFATS program ceased operating during the fiscal standoff because Congress did not allocate new funding. Industry officials were left in the dark about whether the security regulations were still in effect.

Sen. Thomas R. Carper (D-Del.), chairman of the Senate Homeland Security & Governmental Affairs Committee, has acknowledged that the failure of Congress to pass a long-term authorization for CFATS has not provided DHS with the stability it needs to make the program work as well as it should.

Carper has been working with Sen. Thomas A. Coburn of Oklahoma, the panel’s top Republican, and other committee members on a bipartisan, multiyear ­authorization bill that is likely to mirror the CFATS measure passed by the House.

“I think a bill that can bring various stakeholders together is one that this committee should examine closely, take seriously, and perhaps use as a model for our work on this issue between now and the end of the year,” Carper remarked at a recent committee meeting.

With DHS’s authority to operate CFATS set to expire once again in October, industry officials are confident that Congress will continue the program. But the window for the Senate to act is narrow, and campaigning for the midterm elections will take up much of the remaining session.

“I’m optimistic that Congress will get around to authorizing CFATS,” SOCMA’s Allmond says. “I know that both the House and the Senate are committed to a multi­year authorization. Whether there is enough time to get that done is a big question.” At a minimum, Allmond says, Congress will extend CFATS for another year through the appropriations process.

But the industry is aggressively lobbying key members of the Senate to take up legislation that would “cement the hard-fought gains the House accomplished” with passage of H.R. 4007, NACD President Eric R. Byer says. “Politics simply has no place when it comes to a bill of this importance.”