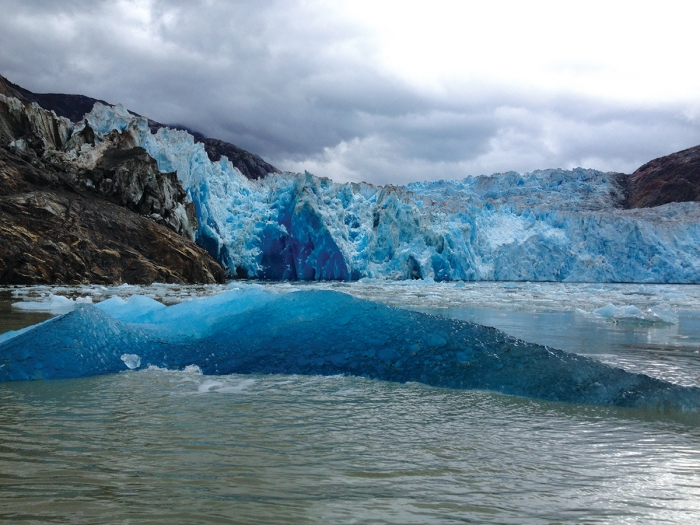 I turned 61 a few weeks ago. (How the hell did that happen?) I spent my birthday with my wife, Jan, and older son, Rudy Jr., on a boat trip to Tracy Arm, the fourth-longest fjord in North America, located about 40 miles south of Juneau, Alaska.

It is a spectacularly beautiful place—miles of glacially carved stone, tall waterfalls, conifers growing out of clefts in the ancient rock, and at the end of the water, the South Sawyer Glacier, a half mile wide, 200 feet of blue glacial ice above the surface of the water and 800 feet more below. I couldn’t imagine a better way to spend the day. I was happy.

It is increasingly difficult to maintain one’s happiness in the world today. Not just because of the geopolitical madness in Syria and Iraq, in Ukraine, across North Africa, and in so many other places in the world where religious intolerance and blatant stupidity create unimaginable human suffering. Like all journalists, I’m a news junkie. However, I’m finding it harder and harder to read the Washington Post and the New York Times. The world at large is just so damn bleak.

Besides so much casual cruelty toward fellow humans, we are failing as stewards of Earth. The impact of our failure will likely long outlast the impact of the current spasms of geopolitical upheaval that are so prevalent around the globe.

Want examples? Take the day I wrote this. It was Aug. 28, 2014. In that day’s New York Times there was a “National Briefing” item entitled “20 Types of Coral Listed as Threatened” that said that the “federal government is protecting 20 types of colorful coral by putting them on the list of threatened species, partly because of climate change.” It’s a nice sentiment. It’s also meaningless. We are doing next to nothing to protect the habitat of those corals, so putting them on a “threatened” list is nothing more than feel-good idiocy.

Worse, somehow, for me was an op-ed piece entitled "The Poisoning of Africa’s Vultures" by Darcy L. Ogada, a wildlife biologist who is assistant director of Africa programs for the Peregrine Fund, which focuses on protecting birds of prey worldwide. We know that Asians’ seemingly insatiable demand for ivory fuels the slaughter of African elephants. The point of Ogada’s essay was that circling vultures near a freshly killed elephant—they detect one within 30 minutes—lead game wardens to the elephant before poachers have time to hack off its tusks. So the poachers have taken to sowing poison in elephants’ carcasses to eliminate the vultures. Madness.

Ivory is lovely. We’ve all seen beautiful carved ivory artifacts in museums. But why can’t we stop? Don’t the people buying ivory today care that their lust for a thing is driving a species toward extinction? I guess not.

Worse still are the notions that parts of animals will increase sexual potency or cure cancer or some other ailment. Shakespeare’s witches in “Macbeth” intoned:

“Eye of newt and toe of frog, Wool of bat and tongue of dog, Adder’s fork and blind-worm’s sting, Lizard’s leg and owlet’s wing, For a charm of powerful trouble, Like a hell-broth boil and bubble.”

Dark words. Nothing more than old superstitions. But rhinoceroses and tigers and other animals are being driven to extinction today to satisfy superstitions just as ridiculous.

What is there to say? Human desires are destroying the natural world. I know nothing is going to stop it. We live in the Anthropocene, which someday will be viewed as a time of human-driven mass extinction. Maybe even of ourselves.

Science Communication
Animal lovers battle on social media and a newly named rock star
Environment
Seeking Sustainable Solutions
Environment
Humanity And Nature
Share X
To send an e-mail to multiple recipients, separate e-mail addresses with a comma, semicolon, or both.
Title: Failing As Stewards
Author: Rudy M. Baum
Chemical & Engineering News will not share your email address with any other person or company.