Mining The Microbiome For Therapeutics

SELF-MEDICATING
[+]Enlarge
A peptide (left) made by a human microbe bears a resemblance in form and function to a semisynthetic drug candidate (right). 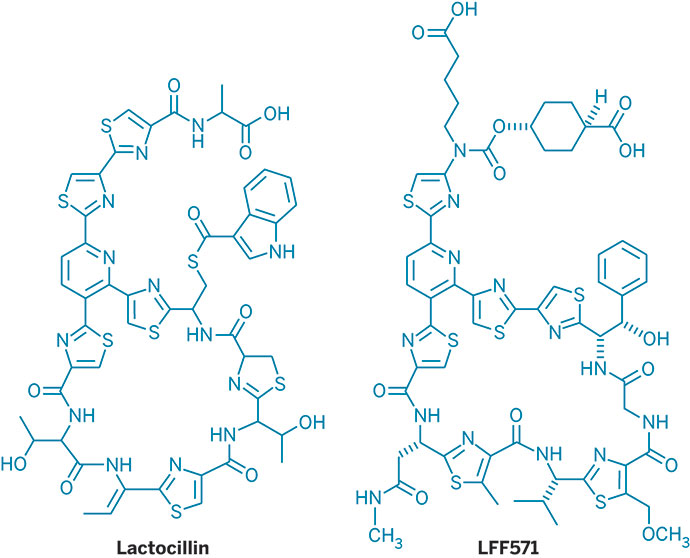 A peptide (left) made by a human microbe bears a resemblance in form and function to a semisynthetic drug candidate (right).

A survey of the Human Microbiome Project’s genomic database has revealed that the microbes living in and on healthy humans contain more than 3,000 sets of instructions for synthesizing small molecules. According to the study, one of those small molecules is a newly discovered, naturally occurring antibiotic produced by vaginal bacteria (Cell 2014, DOI:10.1016/j.cell.2014.08.032).

“I’d always thought that drugs are discovered by drug companies, approved by the Food & Drug Administration, prescribed by a physician—and then they get to you,” says Michael A. Fischbach, a chemist at the University of California, San Francisco, who led the study. “Human-associated bacteria are mounting an end run around that process.”

The newfound antibiotic, which the research team dubbed lactocillin, is a member of the thiopeptide family, a class of cyclic peptides. Scientists studying natural products have long known that thiopeptides possess antimicrobial properties, so lactocillin’s activity itself is unsurprising, Fischbach says.

What is fascinating, he contends, is the number of small molecules the microbiome is producing and how little scientists know about them. Researchers have characterized only a few of the microbiome’s small-molecule products, largely in one-off studies.

Fischbach and his colleagues introduced a more systematic approach. By mining the microbiome’s genomic data for genes known or suspected to guide small-molecule synthesis, they revealed which chemicals microbes are likely making and where: in the gut, on the skin, or in the urogenital tract, for instance. The next step would be to determine the biological function of all these natural products. The team decided to investigate thiopeptides first, partially because of their documented therapeutic properties.

In 2012, pharmaceutical company Novartis announced it was developing a drug based on a thiopeptide called GE2270A that is produced by rare soil microbes (J. Med. Chem. 2012, DOI: 10.1021/jm201685h). The semisynthetic molecule, LFF571, is now being evaluated in Phase II clinical trials as a treatment for gastrointestinal infections caused by the bacterium Clostridium difficile. Despite coming from two completely different types of bacteria, the genes behind the production of GE2270A and lactocillin are remarkably similar, Fischbach says, adding that this fact helped his group identify the new antibiotic.

The team worked with an algorithm that spotted a gene cluster in a vaginal microbe that looked like one known to be involved in making thiopeptides. This finding allowed the researchers to then isolate that gene cluster, purify its small-molecule product, and study the thiopeptide’s biological function. Lactocillin attacked most gram-positive bacteria the team tested it against, with the notable exception of those that are normally present in the vaginal microbiome.

The thiopeptide may thus play a role in protecting the vagina against foreign microbes, the researchers report. But because they performed the experiments with cultured bacteria, they don’t yet know whether lactocillin occurs in vivo. Still, their purified antibiotic bears a striking resemblance in both function and form to other thiopeptides, including GE2270A and, by extension, LFF571.

“We know that they’re very closely related biosynthetically, but also chemically,” Fischbach says, although he does acknowledge a subtle difference between the two natural products, lactocillin and GE2270A. “If you’re a connoisseur, you would say they belong to two different subclasses of thiopeptides because their ring size is ­different.”

Some researchers believe that the Fischbach team’s approach, which weds computational and chemical analyses, could be the key to harnessing the therapeutic potential of human-associated bacteria.

“This is a provocative study. I see part of the natural products field going this way in the future, taking more of a bioinformatics approach,” says Matthew J. LaMarche, a senior investigator at Novartis who was involved with the discovery of LFF571. But he adds that it will be some time before such an approach yields novel pharmaceuticals or a concrete understanding of the chemical dialogues within the human microbiome.

“We are just at the beginning of the journey,” agrees George M. Weinstock, associate director of microbial genomics at the Jackson Laboratory for Genomic Medicine, a nonprofit research organization. But this study is an exciting and encouraging start, he says. “There will be many more stories like this.”

The challenge will be building on this work so that microbiome researchers can address gene clusters in a systematic way and build a pipeline for analyzing their myriad molecular products, Fischbach says.

Our bugs are not sitting idle in our bodies, he says, “they’re quite active chemically. I look forward to seeing how we can extend our approach to learn more about the chemistry of perhaps the most important microorganisms on the planet.”

Antibiotics
Bacteria behind tooth decay make antibiotics that take out their competitors
Microbiome
Bacteria in our guts break down dozens of popular drugs
Microbiome
Inspired by the microbiome, can poop pills and gut bugs help boost cancer immunotherapy’s effects?
Share X
To send an e-mail to multiple recipients, separate e-mail addresses with a comma, semicolon, or both.
Title: Mining The Microbiome For Therapeutics
Author: Matt Davenport
Chemical & Engineering News will not share your email address with any other person or company.