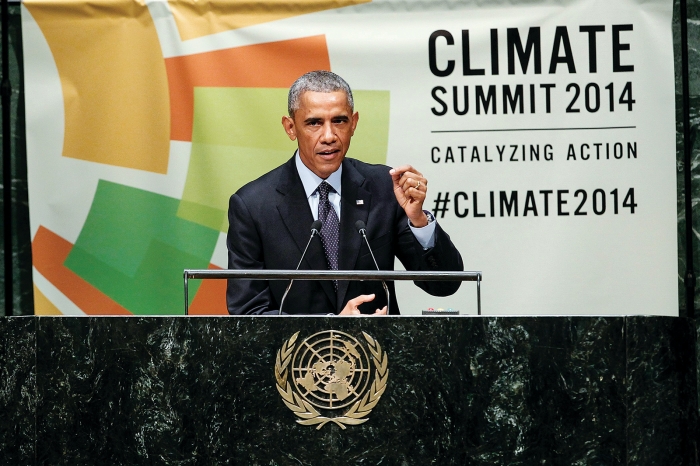 “The climate is changing faster than our efforts to address it,” Obama said as he addressed a climate summit held at United Nations headquarters in New York City. “We cannot condemn our children, and their children, to a future that is beyond their capacity to repair.”

Efforts by the U.S. and China are essential to any global action. China is now the world’s largest emitter of greenhouse gases, and the U.S. is the second largest. The U.S., meanwhile, has contributed the most to cumulative global emissions.

UN Secretary-General Ban Ki-moon hosted the summit to foster high-level political support for a new climate change treaty, due to be finished at the end of 2015, that is supposed to involve actions by every country. Two days before the summit took place, hundreds of thousands of demonstrators took to the streets of New York City calling for action on climate change.

To help inform the UN discussions on climate, scientists published a series of reports last week providing the latest numbers on global carbon dioxide emissions and their implications. The scientists estimate that a record high 40.3 billion metric tons of CO2 will be emitted into the atmosphere this year from burning fossil fuels, producing cement, and deforestation. That is an increase of 2.3% over 2013.

China, the U.S., the European Union, and India are the four largest emitters, together accounting for 58% of the total. India’s emissions are projected to grow by 4.9% and China’s by 4.5% in 2014. Those of the U.S. and the EU are expected to decrease by 0.9% and 1.1%, respectively. Global emissions must be reduced by about 5% per year for several decades, the scientists estimate, to keep global warming below 2 °C relative to the beginning of the industrial age. Policymakers in 2009 set the goal of restraining global warming to 2 °C, the threshold that scientists believe will trigger destructive environmental and economic impacts.

Scientists have estimated that CO2 emissions must remain below a total of 3,200 billion metric tons to prevent exceeding the 2 °C temperature cutoff. Two-thirds of this amount has already been emitted, and at the current emissions rate, the remaining one-third will be emitted in around 30 years. Staying below this emission quota will require that more than half of proven fossil-fuel reserves remain unused in the ground, unless sufficient carbon capture and storage technologies are put into place.