REFLECTIONS
Credit: ACS Productions
In an interview with C&EN’s Rudy Baum, Madeleine Jacobs reflects on her career at ACS.

Her work at C&EN prepared Jacobs well to take over as ACS executive director and chief executive officer when longtime executive director John K Crum retired at the end of 2003. ACS was strong in many respects—it had 159,332 members and its publications, databases, meetings, and educational efforts were all highly regarded—but the activities of its various divisions were largely uncoordinated, its Web presence was inadequate, and it lacked a robust and institutionalized strategic planning process. 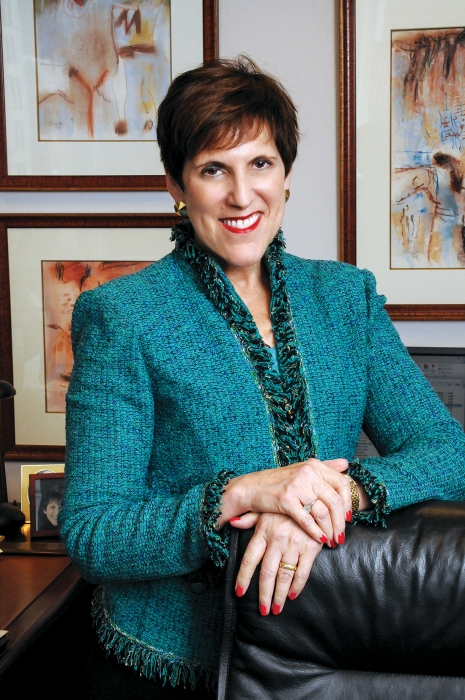 Over the next 11 years, Jacobs addressed the challenges while maintaining and bolstering the society’s core strengths. She established an executive leadership team, which met on a regular basis and quickly became a coherent unit that focused the society’s efforts on achieving ACS’s new vision: “Improving people’s lives through the transforming power of chemistry.”

To say that ACS has been transformed under Jacobs’s leadership would be an understatement. ACS is now more than 161,000 members strong; its finances are now secure and stable; it has a forward-looking, four-part strategic plan; and its website has been reinvented. The ACS Publications Division and Chemical Abstracts Service (CAS) are the world leaders in discovery and dissemination of chemical information. The society’s meetings bring together tens of thousands of chemists every year to network and share the latest in chemical information. Its Petroleum Research Fund is a vital source of funding for cutting-edge research. And ACS has taken a leadership role in advancing the training and interests of the next generation of high school chemistry teachers.

In late October, Jacobs met with C&EN Acting Editor-in-Chief Rudy Baum (who was C&EN’s managing editor under Jacobs from 1995 to 2003) to discuss her tenure and legacy at ACS.

C&EN: What were some of the major challenges you faced when you became executive director?

Jacobs: ACS is a great organization, and it was a great organization in 2004 when I became executive director. But the society had not fully kept up with the changes going on in the chemistry enterprise. So, first and foremost, it was just making sure the entire staff and the society were responding to those external challenges. The work environment was changing, we were really operating in an online world, and in many ways ACS was not where it needed to be.

We were also operating at a deficit, which didn’t make a lot of sense because both CAS and our journals were highly successful. We had to look at our business practices and all of our operations to see how we could streamline some of them to be more cost-effective and more efficient in delivering our programs, products, and services to our members and our other customers.

C&EN: You lead a large organization with a sizable staff. But ACS is also a huge volunteer organization. How have you interacted with that side of the society? 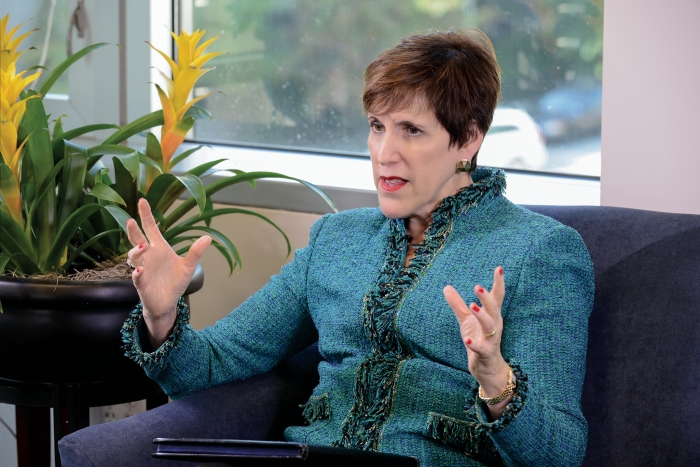 Jacobs: Very few people recognize the complexity of the interaction between ACS staff and volunteers. We have 161,000 members and thousands of them are very active in ACS. Of course, once a year, everybody gets together and celebrates National Chemistry Week (NCW), which involves all of our 186 local sections. However, throughout the year, thousands of dedicated volunteers work to advance the chemistry enterprise.

Volunteers in our technical divisions, for example, put together the programs for our national meetings twice a year. This is an enormous grassroots activity that would be almost impossible to duplicate using staff alone. These are people at the cutting edge of research in their fields putting together these two exciting meetings each year that staff supports logistically. You have this great synergism, this great partnership between the volunteers and the staff.

If you go beyond national meetings and NCW, there are many activities we do that rely on that partnership. I don’t think there is any other scientific society that can boast of that kind of strength and involvement.

C&EN: What are some of your major accomplishments?

Jacobs: Am I limited to my tenure as executive director? Because I think one of my major accomplishments is what we—you and I—accomplished together at Chemical & Engineering News. There, what I’m proudest of is taking a good magazine and making it a great magazine. Making it something that every member felt they had to read. C&EN being the number one or two benefit of membership of ACS was the platform that enabled me to move into this job. I was able to see what was going on in the entire chemistry enterprise, which is what was, in the end, what convinced the board of directors that I was the right person to take this job.

What I’ve accomplished as executive director has been a team effort as well. Among the things I’m very proud of is that we are recognized as an authoritative provider of information. We’ve secured CAS’s long-term future. We have 47 premier journals in chemistry. We have the best technical meetings of any scientific society.

I am very proud of getting the Hach Scientific Foundation donated to ACS; it is providing us with an incredible platform to educate the next generation of high school chemistry teachers. That foundation is now valued at $45 million. It was the largest single gift ever given to ACS.

There are so many things. We put in place a process to evaluate the entire portfolio of programs in Membership & Scientific Advancement, Education, and Public Affairs to ensure we are doing the right things and that we are using our resources wisely. That was an 11-year effort. When it came to fruition, it meant to me that it was a good time to retire. When you finish everything that was on your original checklist, then it’s probably a good time to move on to something else.

C&EN: Your time at ACS spans the period in which we’ve seen a revolution in digital technology and how we transmit information. Could you reflect on that?

Jacobs: It is hard to believe that it was only in 1996 that ACS introduced online journals. I remember the year before that when we had a strategic planning meeting in the Publications Division. We were doing scenario planning. We addressed the question: Are we in a time of radical change, moderate change, or are things going to change rather slowly? It was 1995, but we knew we were introducing electronic journals in 1996. There was not one person in the room who said we were in a period of radical change. It is astonishing that none of us really saw the potential of the online journal, how it would revolutionize the way scientists did research.

C&EN: What’s the best piece of advice you’ve been given during your career?

Jacobs: I’ve had more than one best piece of advice. The first one, because I’m an impatient person, was from Jim Burke, my first chair of the board, who said, “It’s better to do it right than to do it fast.” At ACS, sometimes there is impatience among the staff. We have ideas; we want to get them done. Sometimes we have to take a slower path to get buy-in from all of our stakeholders. Then you will not only have a good product, but you will have people who are invested in it.

A second piece of advice came from a past ACS president, Paul Anderson, who said, “You can get credit for things or you can get them done, but you can rarely do both.” What is important in leadership is to ensure that the good ideas get adopted. It really doesn’t matter who gets the credit for it.

One more came from a wonderful executive coach, John Tydings, who passed away last year. John gave me the mantra that I’ve used for many years now to start my day: Stay calm, listen carefully, pause before speaking, and be strategic when you speak.

C&EN: What would be your farewell message to ACS?

Jacobs: Nothing good happens without the power of people. The best part of having been in these leadership positions at ACS is getting exciting, important work done through the people here. This is a great organization. It has a really important mission. It has a great vision. I tell all employees when they first come here that whatever they do, they’re working on a mission that enables scientists to do their work better, more accurately, to advance the entire enterprise for humankind. Chemists and chemical engineers are part of the great solutions—protecting the environment, getting enough clean water and food, curing diseases like Ebola, creating new materials, providing sustainable energy. To me, that is really exciting. It’s been such an honor and a privilege to be part of such a noble mission and to be excited about coming in every day and advancing that mission.

Finally, I am absolutely delighted that Tom Connelly (see page 5) will be taking over the helm of ACS as executive director and CEO on Feb. 17. I can’t think of a better person to succeed me.

Policy
You And ACS: Relevant, Energized, Committed
ACS News
To The Editor (And All ACS Members)
Policy
Madeleine Jacobs To Retire As CEO
Share X
To send an e-mail to multiple recipients, separate e-mail addresses with a comma, semicolon, or both.
Title: Madeleine Jacobs Reflects
Author: Rudy M. Baum
Chemical & Engineering News will not share your email address with any other person or company.