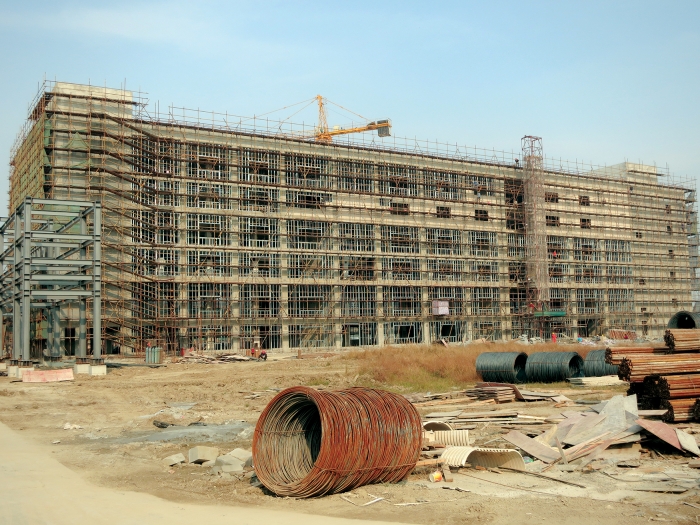 Credit: Jean-Francois Tremblay/C&EN
With the construction of a new site in Changzhou, China, WuXi is moving aggressively into the manufacture of ingredients for patented drugs. Shown here is one of nine plants being built.

When construction is completed around 2020, the site will include nine commercial production facilities for active pharmaceutical ingredients, or APIs. It will be a surprising amount of manufacturing capacity for a company that is now mostly a provider of laboratory services. But WuXi is confident that if it builds, customers will come.

It’s a scenario much feared by Western contract manufacturers of drug ingredients. They have watched WuXi expand from a single lab in 2000 to a Chinese research outsourcing behemoth with more than 8,000 employees and sales that are expected to approach $700 million this year. That growth occurred as drug companies eagerly signed up for WuXi’s low-priced services. In the process, those companies closed labs and ended contracts with Western research outsourcing firms.

China has a poor reputation as a source of pharmaceutical chemicals, but WuXi by contrast has established itself as a reputable supplier of research services. The company is hoping that its good name in R&D will enable expansion into manufacturing. Already, WuXi managers say, customers have reserved capacity in the first two of the nine plants.

“We want to transform how industry develops and manufactures APIs,” says Minzhang Chen, WuXi’s senior vice president of manufacturing and manager of STA. Before joining WuXi, Chen lived for 17 years in the U.S., where he worked in process development and manufacturing at companies including Schering-Plough, now part of Merck & Co., and Vertex Pharmaceuticals.

What WuXi will offer, Chen says, is a seamless workflow for innovative new drugs, starting from early-stage discovery all the way to commercial pharmaceutical chemical production—and all done in China, where costs are lower than in the West.

In Changzhou, WuXi is spending $140 million to build the first phase of its new manufacturing site. Expected to come on-line at the end of next year, this phase will feature three plants, infrastructure such as a tank farm, a process development center, and ancillary facilities including offices and a canteen. Phases 2 and 3 will cost less to build but will double, and then triple, the production capacity of phase 1.

Customers will include both small and large companies from the West and Japan that invent and develop drugs for sale primarily in Western countries. To small biotech firms that don’t have their own plants, WuXi will provide virtual manufacturing capabilities, Chen says. “They won’t need to sell out and team up with a big pharmaceutical firm as early as they do now.”

And big drug companies that already have their own manufacturing facilities will, over time, turn to WuXi, he contends. Those companies will focus on what they do best, which is drug discovery and marketing, he says. “We don’t think that making APIs is the core business of major drug firms any longer.”

But so far, few Western companies are willing to have APIs for new drugs made in China, counters Oliver Ju, chairman of Porton Fine Chemicals , a Chinese manufacturer of pharmaceutical intermediates and APIs that has won the trust of some big Western firms. “We do see demand evolving toward Western companies outsourcing in China to serve the China market,” he notes.

Western companies are increasingly outsourcing the manufacturing of starting materials and intermediates to China, Ju says. Chinese firms also make APIs for generic drugs. But it will take time before Western firms rely on Chinese manufacturers for their innovative products. And WuXi in particular will have to overcome its reputation as primarily a research services provider. “It will be a long journey for them before they fully develop their manufacturing capabilities,” Ju predicts.

WuXi does not at the moment offer industry-leading drug manufacturing know-how, Chen concedes. “Of course, we are not better than Lonza!” he exclaims, referring to the well-established Swiss contract manufacturer of drug actives.

On the other hand, he insists that WuXi’s STA unit is a reliable supplier, fully able to meet global regulatory standards. The company, he notes, supplies advanced intermediates for the cancer drug Imbruvica, marketed by Pharmacyclics and Johnson & Johnson. “If WuXi STA can supply good quality, on time, and at only 30% of the cost of manufacturing in-house, then why not use us?” he asks.

And WuXi already offers more than just drug discovery research, Chen argues. At its Shanghai headquarters, the firm operates what he claims is the world’s largest process development center. The facility’s staff will likely grow to 700 people next year and then increase further when the Changzhou facility becomes operational. Two-thirds of employees have at least a master’s degree, Chen says.

And WuXi STA already operates substantial manufacturing operations. In Jinshan, an industrial district of Shanghai, WuXi has for 10 years produced complex intermediates and APIs for drugs in clinical trials. More recently, the Jinshan site began producing APIs in commercial quantities, making use of 28 reactors as big as 20,000 L. Earlier this year, the Jinshan facility was inspected by the U.S. Food & Drug Administration in advance of producing an API for a patented drug sold in the U.S.

Competitors concede the logic of WuXi’s plan. “Now that WuXi has been approved to make an API for sale in the U.S., it makes sense for them to do this Changzhou expansion,” says Portia Lin, vice president of marketing and sales at the Taiwanese API manufacturer ScinoPharm. Lin also acknowledges that the company has a foot in the door with customers who are already signed up for chemistry research and drug development.

But WuXi’s competence as a contract research firm will not automatically attract manufacturing contracts, she says. Even though WuXi has proven its capabilities at Jinshan, many customers won’t outsource to Changzhou until the site has had its first FDA inspection. Moreover, some customers may not be so easily sold on the idea of WuXi as a competent large-scale manufacturer. “Having earned trust as a contract research organization helps, but manufacturing is a different field for WuXi,” Lin says.

Nonetheless, she expects that WuXi’s ambitious expansion in Changzhou will have an impact on the API industry. In recent years, more and more customers have expressed a willingness to buy from China, even if only as a secondary source. This change in attitude has hurt European firms. Lin says she knows of German contract manufacturers that have been cutting costs and reducing prices to compete with Asian producers.

Pharmaceutical chemical companies in the U.S. and elsewhere in Asia won’t be immune either. “This expansion will have an impact on all contract manufacturing players,” Lin says.

Pharmaceutical Chemicals
PharmaBlock buys Porton drug chemical plant
Business
How other Chinese companies are competing with WuXi
Business
Running out of capacity at WuXi’s manufacturing arm
Share X
To send an e-mail to multiple recipients, separate e-mail addresses with a comma, semicolon, or both.
Title: WuXi Sets Its Sights On Pharmaceutical Manufacturing
Author: Jean-François Tremblay
Chemical & Engineering News will not share your email address with any other person or company.