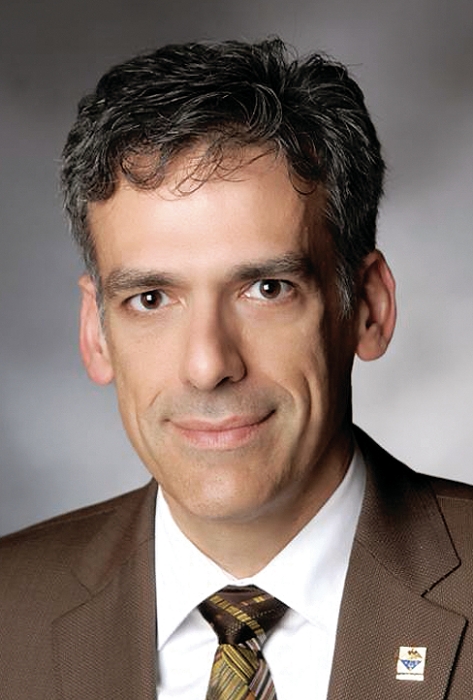 A Cuban immigrant and the first in his family to go to college in the U.S.,Rigoberto Hernandez confronted many of the barriers that can hold back members of underrepresented minority groups from becoming scientists.

But Hernandez, 46, is now a chemistry professor at Georgia Institute of Technology, an achievement he attributes, in part, to the help of mentors in college and graduate school.

His personal experience has led Hernandez to focus on improving mentoring for students traditionally underrepresented in the sciences. In addition to his mentorship of individual students, he leads Open Chemistry Collaborative in Diversity Equity (OXIDE), which works with department chairs to change policies that have led to inequality.

“The persistence that has led Hernandez to his high level of research accomplishment convinces me that his leadership will effect institutional change, one student, one faculty member, and one department at a time,” says Robert L. Lichter, principal of Merrimack Consultants, who has collaborated with Hernandez on diversity issues.

Hernandez learned early on that mentorship isn’t easy. While an undergraduate at Princeton University, Hernandez returned to his diverse Miami-area high school to talk to the Advanced Placement chemistry class. But the students weren’t willing to buy into the story of someone so young. “If and when it was the right time to help students from different backgrounds, I had to do it from a position of authority,” he says.

Hernandez went on to graduate from Princeton in 1989 with a B.S.E. in chemical engineering and mathematics, then he got his Ph.D. in chemistry at the University of California, Berkeley, in 1993. After postdocs at the University of Pennsylvania and Weizmann Institute of Science, in Rehovot, Israel, he became a professor at Georgia Tech, where he is a theoretical chemist.

While he always worked with individual students, Hernandez didn’t become serious about mentoring until around 2001, when he attended a workshop on how to encourage diversity. “It opened up the possibility for me to play a role in the national conversation,” he says.

At the same time, Hernandez received the Goizueta Foundation Junior Professorship at Georgia Tech, which came with some flexible funding. He used it to foster community for undergraduate and doctoral students from disadvantaged backgrounds. His goal was to make sure these talented students had the right mentors and other support to help them be successful.

“We are asking individuals who are disadvantaged to make the choice of being academic professional scientists even though there are risks involved,” he says. The larger community should share part of that risk. “We need to give them opportunities so that it is easy for them to make the right choices to advance their careers.”

Hernandez’s OXIDE program aims to make chemistry departments more hospitable to faculty from all backgrounds. For example, the program suggests that universities perform open faculty searches rather than those focused on a narrow field and voice support for diversity in all of their outreach materials.

“We are maintaining our high standards for academic excellence,” Hernandez says. “Eliminating barriers to success puts us all in a situation to recruit and retain the best minds from a more diverse cohort.”

Hernandez will present the award address before the Division of Physical Chemistry.

Diversity
The struggle to keep women in academia
Education
U.S. NIGMS pulls out of F31 predoctoral fellowship program
People
ACS Award for Encouraging Women into Careers in the Chemical Sciences: Judith M. Iriarte-Gross
Share X
To send an e-mail to multiple recipients, separate e-mail addresses with a comma, semicolon, or both.
Title: ACS Award For Encouraging Disadvantaged Students Into Careers In The Chemical Sciences
Author: Andrea Widener
Chemical & Engineering News will not share your email address with any other person or company.