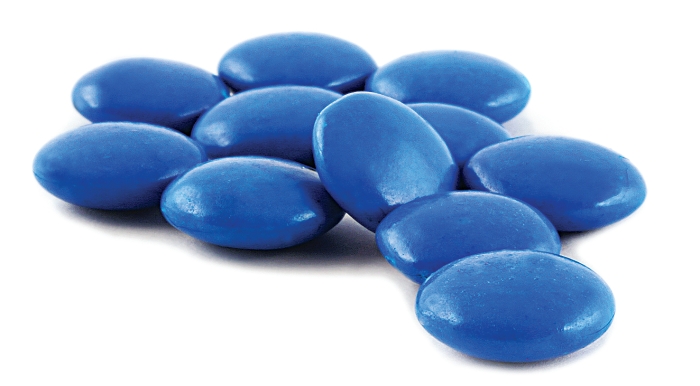 Credit: Shutterstock
Mars, the maker of M&M’s, has FDA approval to use natural blue food coloring. In Europe, the firm already uses natural dyes in yellow, orange, and red M&M’s.

Although the market for naturally derived food colors is well established, there is not yet a product for every need. Ingredients makers and food companies are busy developing more options for blue, green, and red.

The recent Food & Drug Administration approval of spirulina extract for blue and green confections is the result of one effort to close the gap. Brought before the agency by Mars, maker of M&M’s and other candies, the extract contains phycocyanobilin, a blue, water-soluble pigment that along with chlorophyll gives blue-green algae its color.

It may seem odd that there would be demand for a natural blue candy color. After all, M&M’s aren’t exactly health food. But Americans might be surprised to learn that in the U.K. Mars colors yellow, orange, and red M&M’s with naturally derived turmeric, β-carotene, and carmine, rather than Yellow No. 5, Yellow No. 6, and Red No. 40. The blue and green ones are still made with synthetic dye in both the U.S. and Europe.

Blue and green M&M’s aside, European food makers are way ahead of their U.S. counterparts in doing without synthetic food dyes, experts point out. Beginning in 2008, on the basis of studies suggesting a link between some artificial colorings and hyperactivity in children, regulators in the U.K. and the broader European Union asked manufacturers to remove six of the color dyes from their products.

That pressure is a main reason why global sales of natural colors increased by almost 30% from 2007 to 2011. Natural colors continue to represent the only growth category in the $1.5 billion annual market for food colors, according to the British consulting firm Leatherhead Food Research.

In researching the U.S. market, Jonathan Thomas, principal market analyst at Leatherhead, was “a little surprised to see how many big grocery brands feature artificial colors.” Thomas points to General Mills breakfast cereals as the type of wholesome-seeming products that still contain artificial colors, including yellow, one of the easiest to replace. Kellogg’s blueberry Nutri-Grain Cereal Bars, made with “real fruit,” contain Blue No. 1 and Red No. 40.

One hurdle that color makers need to cross is obtaining regulatory approval for new products. Be the color synthetic or natural, the approval process is generally easier when just one application is pursued. For example, green from chlorophyll is approved in the U.S. but only for citrus drink powders.

Tell us: Do you choose foods made without artificial colors, flavors, and preservatives? Visit http://cenm.ag/additives.

“Many things not approved here have been used overseas for decades,” says Byron D. Madkins, senior director of product development for the U.S. arm of the Danish natural ingredients maker Chr. Hansen.

Another difficulty of developing natural colors is making them stable enough to survive heat, light, and acidic environments. Synthetics are very stable, but plant-based colors can settle or degrade, points out Chad Ford, associate director of colors at Wild Flavors. For example, plant-based antho­cyanins that start as purple may change to red, and red may change to brown if used in low-pH liquids or exposed to light. Five years ago, Wild introduced a stable blue color derived from fruit. 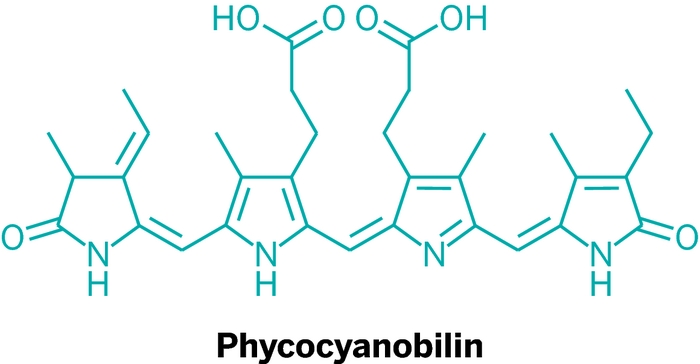 Food color makers also face the challenge of navigating consumer perceptions of what is natural and desirable. In the U.S., the approved name of the natural color appears in the ingredients list. Thus the blue developed by Wild may sound appealing because it can be labeled “with fruit juice (color),” whereas Mars’s new blue will be listed as a more forbidding “spirulina extract.”

The natural color carmine has its own perception problems. Food makers like carmine because it is stable and bright and can form orange, magenta, red, or purple. But it is derived from the cochineal insect; some vegetarians and people who adhere to kosher guidelines are averse to consuming what was once a beetle.

Researchers at Chr. Hansen have been working on a fermentation route to carmine, on the basis of the cochineal genome, that would “take it away from the insect realm for those consumers who do the Googling,” Madkins says.

Recently, changing regulations in Europe have kicked off demand for so-called coloring foodstuffs, ingredients made by mashing, cooking, or concentrating vibrantly colored foods. Because they are treated as ingredients rather than additives, regulatory and labeling hurdles are minimized. Madkins says these colorants will appeal to consumers who want “ultra-super natural.”

Leading color firms such as Sensient Technologies, Chr. Hansen, and GNT now offer coloring foods. Raw materials include carrots, sweet potatoes, elder­berries, tomatoes, blueberries, grapes, and spirulina. “The trend will make its way to the U.S., and in fact it is happening now, even without FDA guidance or instruction,” Madkins says. “Smaller brands can use this to compete with big brands.”

Specialty Chemicals
The sugar wars are about to change your food label. Here’s why
Impossible Foods gets FDA nod for soy heme
Food Ingredients
The long road to all-natural preservatives
Share X
To send an e-mail to multiple recipients, separate e-mail addresses with a comma, semicolon, or both.
Title: More Choices For Natural Colors
Author: Melody M. Bomgardner
Chemical & Engineering News will not share your email address with any other person or company.