The rhodium-catalyzed silylation of o-cymene proceeds with a remarkable 82% regioselectivity.

A mild method for adding silyl groups to unactivated aromatic rings has been discovered by chemists at the University of California, Berkeley. The reaction could provide a valuable route to arylsilane monomers for making silicone polymers. And because silyl groups can undergo a number of transformations to different functional groups, the reaction could be used to make arylsilane intermediates en route to more complex molecules. 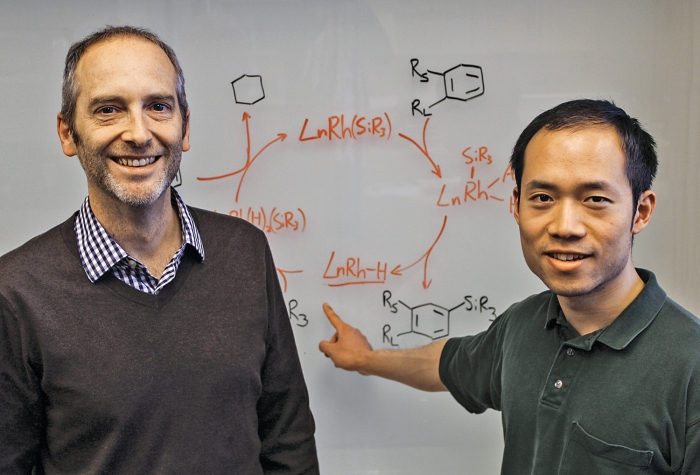 Current methods to add silyl groups require temperatures above 100 °C or photochemical conditions, both of which limit these reactions’ practicality. John F. Hartwig and Chen Cheng discovered that by combining a rhodium catalyst and a hydrosilane with cyclo­hexene as a hydrogen acceptor they could generate arylsilanes in high yields (Science 2014, DOI: 10.1126/science.1248042). What’s more, the chemists found that the reactions take place in a regioselective manner, with steric effects guiding the silyl substituent to a position meta, or two carbons away, to the smallest substituent on the ring.

The strategy even works for cases that have previously been tough to control, such as a silylation of o-cymene, which contains a methyl group adjacent to an isopropyl group. Most reactions guided by steric effects would have trouble differentiating between the position meta to the isopropyl group and the spot on the opposite side of the ring, known as para. But Hartwig and Chen’s silylation method adds a silyl group to the para position 82% of the time.

More than a decade ago, Hartwig’s group, in collaboration with Tatsuo Ishiyama and Norio Miyaura of Japan’s Hokkaido University, discovered an iridium-catalyzed process for turning arenes into aryl boronic esters. This gave chemists easy access to reagents for the ever-useful Suzuki coupling. Realizing that the equivalent reaction to make arylsilanes would provide an equally important tool for making complex molecules, Hartwig set his sights on developing that reaction.

A few chemical clues suggested that switching from an iridium catalyst to a rhodium catalyst might help. After much experimentation, Hartwig’s group finally hit upon the right combination of catalyst ligand and hydrogen acceptor.

“There are many potential applications for the silylation of C–H bonds,” Hartwig says. This new method gives chemists easy access to the compounds, which are both stable and amenable to further transformations, so researchers can further explore their reactivity.

“Hartwig and Cheng have now accomplished for silicon what they have pioneered for the introduction of boron to aromatic compounds,” comments Scott E. Denmark, a chemistry professor at the University of Illinois, Urbana-Champaign, who studies synthetic organic chemistry and organosilicon compounds. “In my view, the transformative power of the newly introduced silyl moiety far outperforms that of boron. Given the low cost, low toxicity, and chemical versatility of the silyl substituent, this method is destined to revolutionize the functionalization of aromatic compounds.”

Hartwig notes that the silylation reaction isn’t yet compatible with as many functional groups as the boron chemistry is, and that its reactivity toward certain heteroarenes is undeveloped. Also, he says, the reaction currently uses a relatively expensive ligand on rhodium. “It would be beneficial to find a simpler ligand that generates a similarly active catalyst,” he says. The group plans to address these limitations.

Synthesis
Adding two functional groups to an aliphatic alcohol in one shot
Catalysis
Strained reagent opens up new cross-coupling reactivity
Synthesis
Fluorine Chemists Strike Again
Share X
To send an e-mail to multiple recipients, separate e-mail addresses with a comma, semicolon, or both.
Title: A Steric Strategy For Regioselective Arene Silylation
Author: Bethany Halford
Chemical & Engineering News will not share your email address with any other person or company.