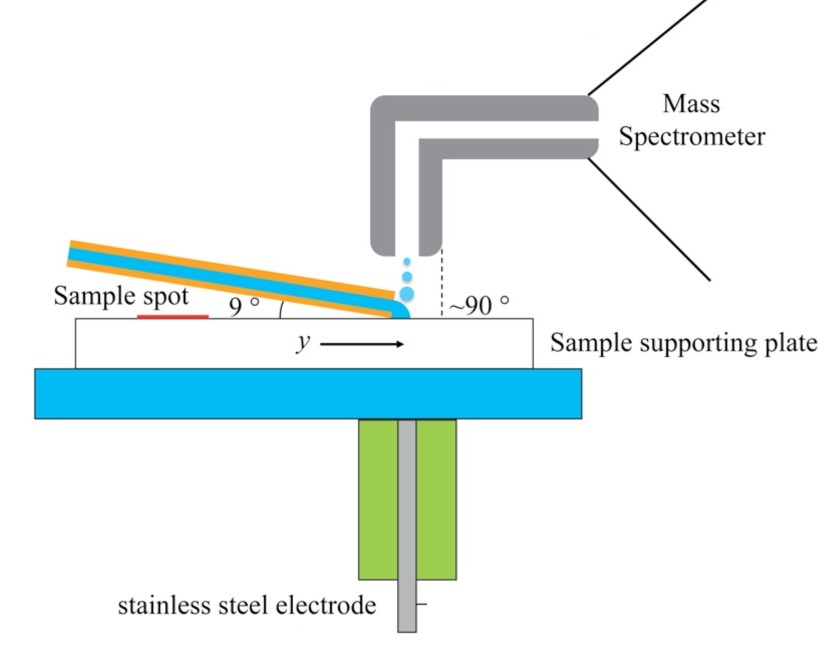 Matrix-assisted laser desorption/ionization (MALDI) mass spectrometry is a current imaging favorite, thanks to the high-resolution images it can generate. However, the method has its drawbacks, such as the need to run the experiment inside a vacuum and to add a matrix material to the sample to help with ionization, says Hubert H. Girault of the Swiss Federal Institute of Technology (ETH), Lausanne. Finding a good matrix can be tricky, and running the experiments in a vacuum increases the complexity and the expense of the technique. Less complicated methods exist, such as desorption electrospray ionization (DESI), but they can’t compete with MALDI’s spatial resolution. Girault wanted to develop an imaging method that worked under ambient conditions, required little fuss to prepare samples, and generated high-resolution images.

He and his colleagues recently developed a new ionization method called electrostatic spray ionization, or ESTASI (Anal. Chem. 2012, DOI: 10.1021/ac301332k). It differs from other forms of electrospray ionization techniques because it doesn’t require a probe to make direct contact with the sample’s surface. To create an imaging version of ESTASI, the researchers mount dry samples onto a moveable sample plate. The plate is sandwiched between a capillary attached to a mass spectrometer and a stainless steel electrode. The setup also includes a second capillary, 50 nm in diameter, that sits fixed in place above the sample. This wetting capillary delivers nanosized droplets of an acidic solution to the sample surface.

To generate images, researchers move the sample around underneath the wetting capillary. At each position, the electrode sitting below the plate generates high-voltage pulses, first at a positive voltage and then at a negative one, that ionizes molecules on the sample surface. The pulses also create a repulsive force that sends ions in droplets of the wetting solution flying away from the sample plate and into the capillary attached to the mass spectrometer. The positive pulse jettisons positive ions, while the negative pulse knocks off negative ions.

The researchers tested the mapping technique on melanoma cells, as well as patterns of spots of protein, peptides, and dye molecules. Under optimal conditions, the researchers could produce images with a resolution of 110 µm. That’s better than the typical resolution for DESI, which is between 180 and 200 µm, but not as good as MALDI’s resolution of about 10 µm. Girault hopes to improve the resolution by shrinking the wetting capillary, so it delivers smaller droplets, and by tweaking the composition of the solution it delivers.

Because the method requires no direct contact between the electrode and the sample, it could allow researchers to analyze samples in different formats, says Renato Zenobi of the Swiss Federal Institute of Technology (ETH), Zurich, who was not involved with the work. He is also impressed by the method’s easy and nondestructive sample preparation: “You could image a butterfly and then let it fly away after.”