Low Doses Of A Controversial Insecticide May Harm Friendly Insects

Environment: A neonicotinoid compound affects fruit flies’ ability to have offspring even at low doses 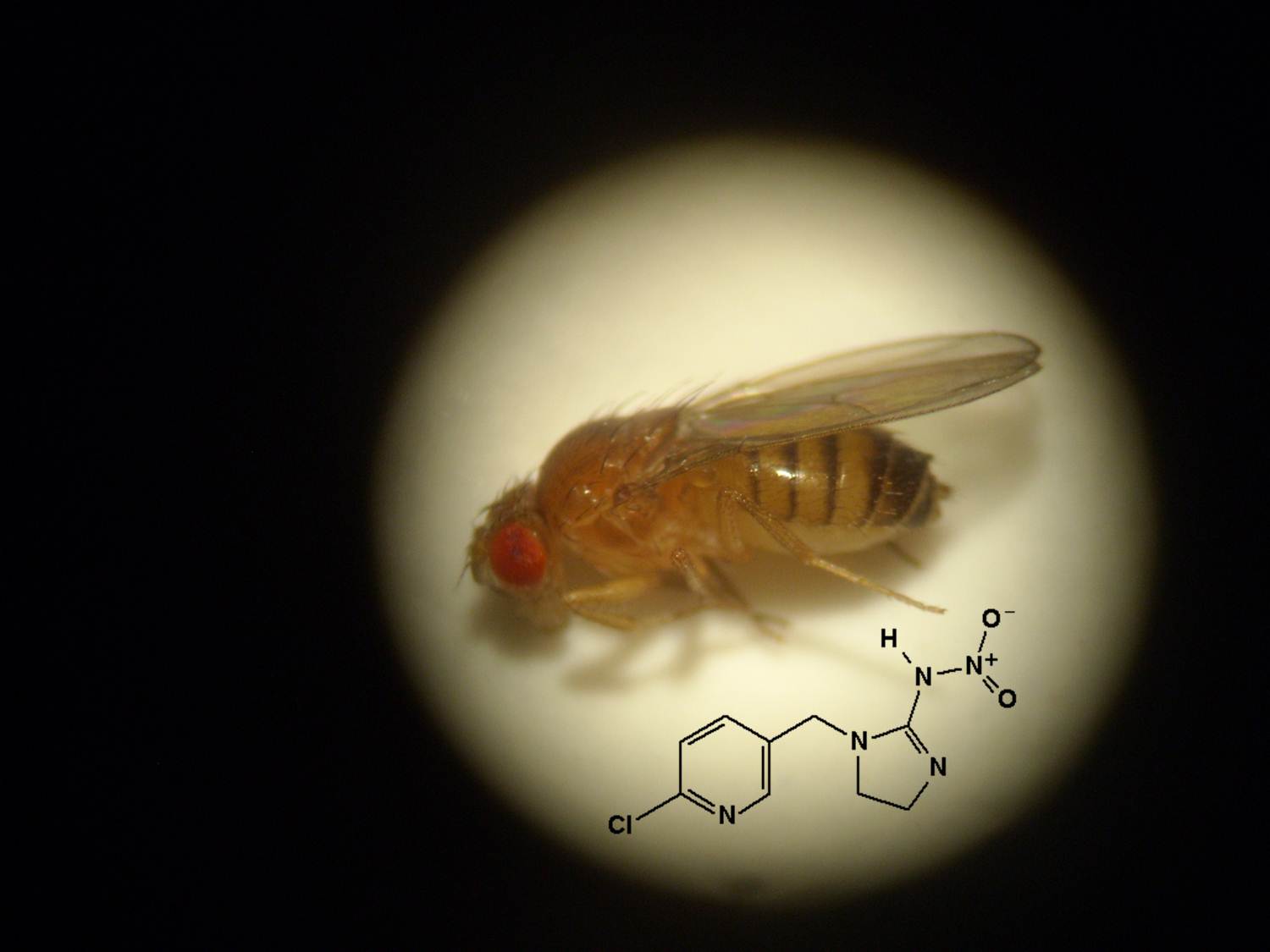 For at least one member of a controversial class of insecticides, low doses may cause as much harm to nontarget insects as high doses do, according to a new study. The number of offspring that fruit flies produce drops significantly when the insects are chronically exposed to nanomolar concentrations of imidacloprid, a member of the neonicotinoid insecticide group (Environ. Sci. Technol. 2014, DOI: 10.1021/es405331c).

In Europe, policymakers have moved to temporarily ban some of the neonicotinoids based in part on previous studies that showed that honeybees exposed to low doses of the compounds developed significant behavioral changes. The new study builds on these low-dose findings and suggests regulators need to rethink how they assess the safety of chemicals applied in the environment, says Dennis vanEngelsdorp, an entomologist at the University of Maryland, College Park, who wasn’t involved in the work.

The main way scientists determine a chemical’s toxicity is to expose lab animals to high doses and then extrapolate what the effects might be at low doses. Regulatory bodies use these studies to help them estimate substances’ risks to humans or wildlife. Many researchers, however, argue that traditional testing doesn’t work for certain compounds. These particular chemicals may cause as much, if not more, harm at low doses as at high doses, says Jean-Marc Bonmatin of the National Center for Scientific Research, in Orleans, France, who led the new study. Researchers in toxicology have debated the issue of low-dose effects for more than a decade, particularly with respect to human health.

One class of chemicals involved in the low-dose debate are the neonicotinoids—insecticides applied to crops that damage pests’ nervous systems. Previous studies have shown that this class can kill beneficial insects like honeybees. But some research has suggested that minute doses of neonicotinoids, such as imidacloprid, may have so-called sublethal effects on bees, such as impaired foraging behavior. Unfortunately, scientists don’t yet have precise ways of measuring sublethal effects on bees in the lab, and of seeing how much these effects hurt bee colonies.

To get a more controlled look at possible sublethal effects caused by imidacloprid, Bonmatin and his colleagues decided to study the chemical in fruit flies (Drosophila melanogaster), a model organism for which researchers have more precise lab methods. The team exposed hundreds of flies to imidacloprid for several days at concentrations up to 400 nM. The team looked for changes to the flies’ mating behavior and the number of offspring they produced.

Flies exposed to some low doses of the pesticide, but not high doses, mated more often—up to 30% more—than nontreated flies did. The higher mating rate may have resulted from the stress of being exposed to the chemical, Bonmatin says.

Despite the extra mating, flies exposed to low doses, but not the highest dose, of imidacloprid produced fewer offspring than control insects did. At 1.96 nM of the insecticide, the team found that these fruit flies had up to 16% fewer offspring than nontreated insects. This concentration is less than 0.01% of the chronic LC50, a standard measure representing the concentration of a chemical that kills 50% of test specimens.

The findings not only provide evidence in support of low-dose effects from chronic exposure, but also suggest that imidacloprid could reduce population sizes of nonpest insects in a way that doesn’t directly kill them, Bonmatin says. Based on the study’s conclusions, Maryland’s vanEngelsdorp thinks regulators should start applying “a different sort of risk assessment with neonicotinoids and all pesticides,” instead of looking only at short-term mortality, which is their current focus.

He also points out that researchers don’t yet understand why this chemical is so harmful at such low doses. One idea is that these tiny doses aren’t high enough to trigger cells’ detoxification mechanisms, vanEngelsdorp says.

Pollution
Measuring microplastics in seafood
Water
Jessica Ray
Pollution
Air pollution hurts honeybees
Share X
To send an e-mail to multiple recipients, separate e-mail addresses with a comma, semicolon, or both.
Title: Low Doses Of A Controversial Insecticide May Harm Friendly Insects
Author: Puneet Kollipara
Chemical & Engineering News will not share your email address with any other person or company.

Comments
Barb Collier (March 15, 2014 12:04 PM)
With the incredible value of the honeybee to the agro/business sector, you would think that all levels of government would err on the side of caution and stop use of neonicotinoids until producing companies carry out independent valid studies to prove "no harm" to non-target species. The fact that the studies up to date have been carried out on lab animals and not insects is like comparing apples to oranges. I believe that a combination of threats have impacted the honeybee and bee populations of the world--insecticides, herbicides, global warming, pollution, agro/business, and mono-agriculture. The constant movement of honeybee populations to pollinate agricultural crops combined with all these factors are causing crashes of the species. The introduction of neonicotinoids are the straw that has broken the camel's back. Governments and the agricultural industry need to step back, assess the damage of GMO seeds and crops and their accompanying insecticides and herbicides to the biodiversity of the plant, insect and animal species, and determine just what kind of future food production has in the global world. Field-food production has become huge-profit big business for multinational companies--bees, farmers, governments only get in their way towards mega-profits.
Reply »

J. Winterle (March 19, 2014 3:12 PM)
Interesting effect. Clearly, then, the pesticides should be administered at higher doses so as to avoid toxicity. And it would appear that the toxicity would be maximized if no pesticide were administered at all, in that the effect increases as the dose is lowered.
Reply »