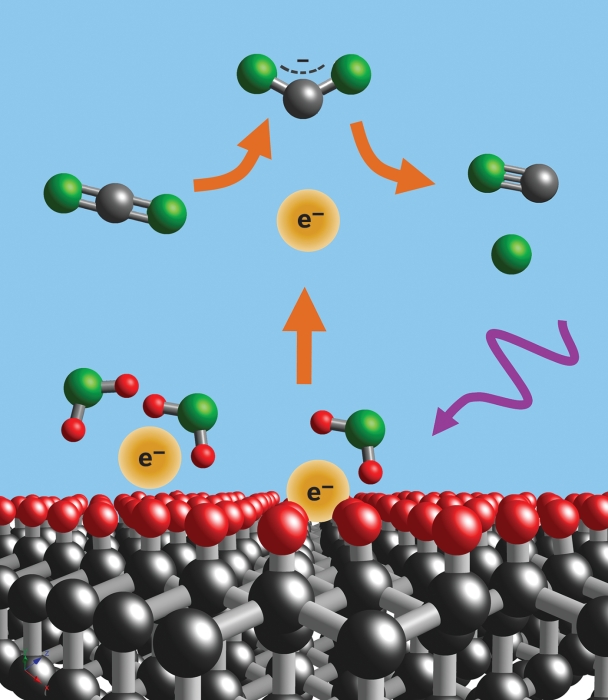 A simple light-driven process might open the door to reactions that are not easily mediated by other means, according to chemists at the University of Wisconsin, Madison. By way of example, they show that the strategy could lead to an inexpensive way to convert the greenhouse gas carbon dioxide to commercially valuable products.

The team capitalized on a property of hydrogen-capped diamond, a common form of the material, that causes it to emit electrons when irradiated with ultraviolet light. The group, which includes Linghong Zhang and Robert J. Hamers, showed that shining UV light on inexpensive, commercial-grade diamond that is immersed in an aqueous CO2 solution liberates electrons that quickly interact with water molecules and become solvated. These energetic species then serve as potent reducing agents that can react with CO2 and convert it to CO, a compound used in chemical synthesis and other industrial processes (Angew. Chem. Int. Ed. 2014, DOI: 10.1002/anie.201404328).

The Wisconsin team stresses that conventional electrochemical and photochemical processes, both of which have been studied for CO2 reduction, require reactants to bond to a surface to react. In contrast, the solvated electron approach does not require surface adsorption. It is based instead on a potentially simpler process—direct emission of electrons into water and solution-phase chemistry.

On the basis of electrochemical measurements, spectroscopy and chromatography analysis, and isotope labeling experiments, the team shows that their light-induced method reduces CO2 with high selectivity (>95%) and produces a minimal quantity of hydrogen, a common by-product of CO2 reduction. Furthermore, they conclude that the reaction occurs by way of a relatively uncommon 1-electron reduction mechanism. That process, which converts CO2 to the radical anion CO2•- en route to forming CO, has a large potential barrier and is inaccessible to other methods. Because it’s easy to produce energetic solvated electrons from diamond, this process might be used to drive other types of reduction reactions.

Synthesis
Dialing Direct For Hydrogen Peroxide
Synthesis
Polymerizations In A Radical New Light﻿
Synthesis
Diamond Drives Chemistry, With Help From Light
Share X
To send an e-mail to multiple recipients, separate e-mail addresses with a comma, semicolon, or both.
Title: Diamond Drives Chemistry, With Help From Light
Author: Mitch Jacoby
Chemical & Engineering News will not share your email address with any other person or company.