Some Atmospheric Nanoparticles Could Have Cosmetic Sources

Atmospheric Chemistry: Siloxanes in personal care products could be source of silicon in ultrafine particulate matter in urban air 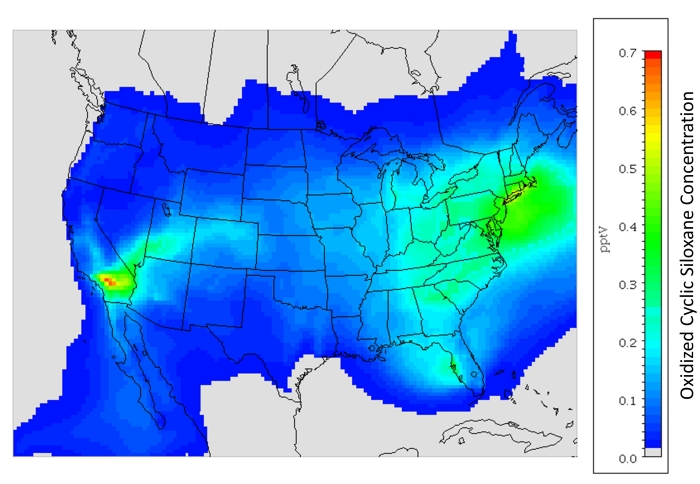 Atmospheric scientists propose that personal care products, such as antiperspirants, could be a potential source of ultrafine particulate matter in air, which can influence climate and pose risks to respiratory and cardiovascular health (Environ. Sci. Technol. 2014, DOI: 10.1021/es5026933). On the basis of data from the U.S. and Finland, they find that airborne nanoparticles in highly populated areas often contain silicon. They hypothesize that organic silicon compounds found in cosmetics and building materials could contribute to the growth of these nanoparticles.

Ultrafine particles, up to 100 nm in diameter, are produced by vehicle exhaust and other combustion processes. They also form when volatile species condense in the atmosphere, often through photochemical reactions. Scientists want to understand the elemental composition of these nanoparticles to determine their sources. Identifying human-made sources could help policymakers regulate levels of the nanoparticles. But pinning down sources has been difficult because the particles’ small size makes them tricky to capture and analyze.

They found silicon in nanoparticles, with a much greater prevalence in urban environments. In Pasadena, Calif., which is part of the Los Angeles metropolitan area, 40% of the measured nanoparticles contained silicon; in Wilmington, Del., a smaller city in the Philadelphia metropolitan area, the proportion ranged from 5 to 13%. In these populated areas, the proportion of silicon-containing nanoparticles did not vary greatly with wind direction, suggesting a diffuse source. At the pristine site in Finland, only about 2% of nanoparticles contained silicon.

Nitrates, sulfates, and organic compounds are thought to be the main components of atmospheric nanoparticles. So Johnston was surprised by the prevalence of silicon in nanoparticles at the urban and suburban sites. He calls the discovery “completely unexpected.”

Given the greater proportion of silicon-containing nanoparticles in populated areas, the researchers suspected the particles had a human-made source. They hypothesized that a likely source is semivolatile organic silicon compounds called siloxanes, which are commonly found in personal care products, as well as in building materials, laboratory equipment, and tubing. Once in the gas phase, these compounds can be oxidized by hydroxyl radicals in the presence of light, forming products that could condense onto and enlarge existing nanoparticles.

To test this hypothesis, collaborator Charles O. Stanier of the University of Iowa made an atmospheric transport model for three of the most common cyclic siloxanes found in personal care products—octamethylcyclotetrasiloxane, decamethylcyclopentasiloxane, and dodecamethylcyclohexasiloxane. The team estimated emission rates for the compounds based on U.S. population data, as well as information based on antiperspirant sales and usage (Environ. Sci. Technol. 2010, DOI: 10.1021/es100411w). They then applied known rates for the reaction of siloxanes with hydroxyl radicals in the atmosphere, to predict the concentration of oxidized cyclic siloxanes across the U.S. These concentrations peaked in populated areas such as Los Angeles and the East Coast, consistent with the team’s field data.

Neil M. Donahue, an atmospheric chemist at Carnegie Mellon University, calls it a pioneering study and says that the team’s hypothesis about siloxanes is convincing. He finds it interesting to see a “plume of deodorant coming away from large cities.” Although the team has shown that this oxidation process could be significant in some contexts, he adds, its significance for ultrafine particle growth in general has yet to be determined.