Sometimes a new boyfriend or girlfriend seems to get more attractive the more you learn about him or her. Scientists don’t often have such relationships with new materials, but they’re having one now.

A recently discovered family of carbides and nitrides first started to catch the attention of researchers in 2012. Referred to as MXenes (pronounced “maxenes”), the materials turned heads because they are electrically conductive, robust, abundant, and stable as nearly atomically thin sheets—properties that could be useful for making high-performance batteries.

MXenes are now looking even better, as researchers have just shown that these materials are also strong and flexible, exhibit high electrical capacitance, and can easily be prepared as composites and moldable clays. The new discoveries suggest that MXenes may also be useful for applications such as flexible and wearable electronics and are attracting more scientists to this intriguing family of materials. Some of those researchers gathered at last month’s Materials Research Society meeting in Boston to discuss their latest findings and ideas for developing those applications.

The history of MXenes is brief. In 2011, Yury Gogotsi and Michel W. Barsoum, materials science professors at Drexel University, were studying ways to make anodes for lithium-ion batteries that outlast standard graphite anodes. The team’s earlier work suggested that a family of electrically conducting carbides and nitrides were promising candidate materials. Those compounds are known as the MAX phases, where M refers to an early transition metal, A symbolizes main-group elements such as aluminum and silicon, and X represents carbon or nitrogen.

The Drexel team treated Ti3AlC2 and other MAX phases with concentrated hydrofluoric acid to selectively remove some of the atoms from the starting materials. The goal was to make enough room in the anode lattice for Li ions to reversibly insert themselves during battery charging and discharging. The process worked. The group ended up with electrochemically active materials that performed admirably in battery tests.

But the Drexel team got more than they bargained for. The group was surprised to learn that the acid treatment had completely removed the Al layers (the A component in MAX) and exfoliated the crystals into microscopic two-dimensionalsheets of Ti3C2. Excited by the discovery of new 2-D materials with graphenelike morphology, the team named the materials MXenes. Within a few months, they showed that the acid treatment could be used to make many 2-D materials by exfoliating additional compounds such as Ti2AlC, Ta4AlC3, (Ti0.5Nb0.5 )2AlC, (V0.5Cr0.5)3AlC2, and Ti3AlCN (ACS Nano 2012, DOI: 10.1021/nn204153h).

Word began spreading quickly. Thanks in part to graphene’s popularity, Gogotsi says, MXenes “have been riding a wave of excitement about 2-D materials.” He adds that researchers are enthusiastic about MXenes because they see what may potentially be a huge new area of materials science emerging.

That enthusiasm is especially noticeable in Gogotsi’s and Barsoum’s groups. The accelerated pace of research by the combined team has led to publication of several journal papers in just the past few weeks. Those studies have common themes—convenient processing methods and more functional forms of MXenes. 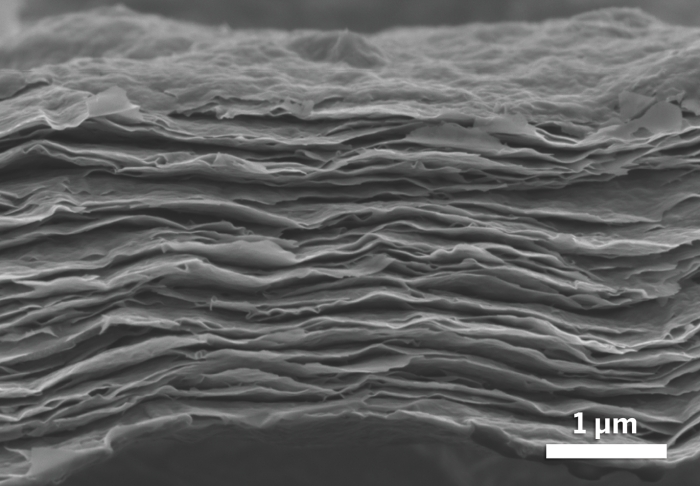 Credit: Proc. Natl. Acad. Sci. USA
Available only as powders until recently, MXenes (titanium carbide shown above) can now be made as large, flexible, electrically conductive films, an advantage for mobile energy applications.

In the early studies in this field, the separated MXene sheets were nanometer-thick flakes with lateral dimensions reaching a few micrometers. Although the particulate (powdered) form of such materials has useful properties, powders have limited function and offer limited processing options. 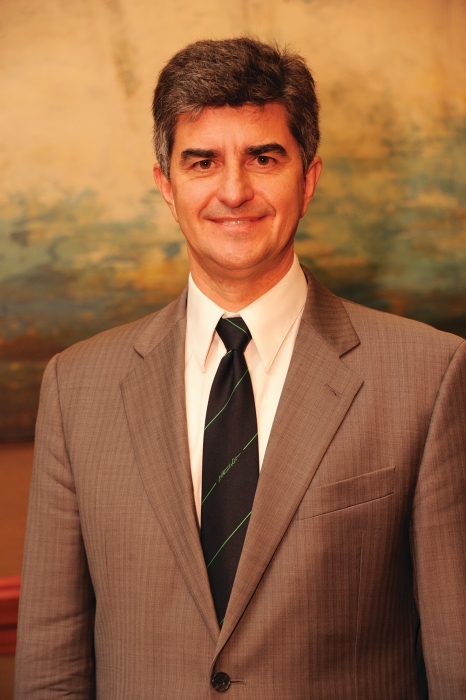 So the team developed a vacuum filtration method that fuses the flakes into freestanding macroscopic thin films. They also devised procedures for making MXene-polymer composites, which could turn these materials into something with commercial value.

Collectively, the thin films are flexible, foldable, and strong enough to be handled repeatedly without being damaged. They are also electrically conductive, hydrophilic, and highly stable in water. Among other findings, the team observed that pure MXene films conduct electricity better and store more charge than graphene and carbon nanotube “paper” (Proc. Natl. Acad. Sci. USA 2014, DOI: 10.1073/pnas.1414215111). The team also found that polymers such as polyvinyl alcohol mix intimately with titanium carbide (the most studied MXene), forming alternating MXene-PVA-MXene layered structures. The composites are up to 400% stronger than pure MXene films. 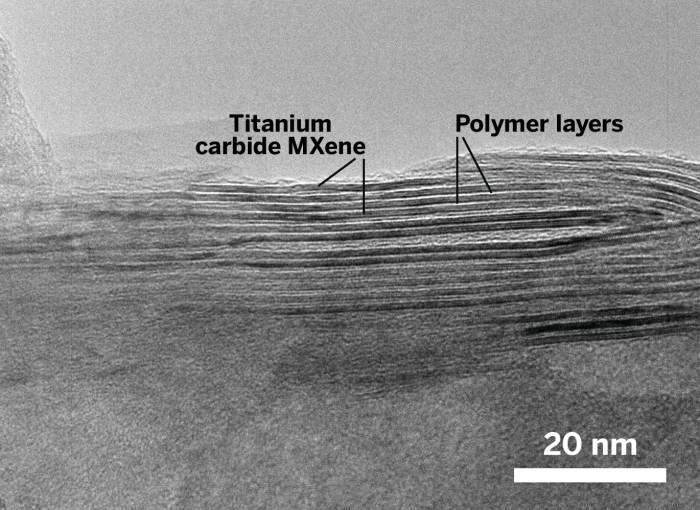 The Drexel team has also devised a method for forming MXene-carbon nanotube composite films (Adv. Mater. 2014, DOI: 10.1002/adma.201404140). Similar to the polymer composites, the nanotube composites are strong and flexible films with an alternating layer structure. Gogotsi explains that inserting polymers or nanotubes between the MXene layers enables electrolyte ions to diffuse more easily through the MXenes, which is key for flexible energy storage applications. But unlike polymers, carbon nanotubes also enable electrons to shuttle back and forth. Initial tests show that MXene-carbon nanotube films work well as supercapacitor electrodes, with no degradation in performance in 10,000 charging cycles.

And in another just-published paper, the Drexel group reported a simpler and safer route to MXene films. The team showed that concentrated hydrofluoric acid, a hazardous chemical that has been used until now to prepare all MXenes, can be avoided by treating the starting materials instead with a solution of lithium fluoride and hydrochloric acid. The resulting material can easily be molded like clay to form conductive films or solids of arbitrary shape (Nature 2014, DOI: 10.1038/nature13970).

FLYING HIGH
[+]Enlarge
Credit: Mitch Jacoby/C&EN
Drexel’s Chang (Evelyn) Ren displays a “paper” airplane she made from a MXene film, showing that the material is strong enough to be handled and folded repeatedly. 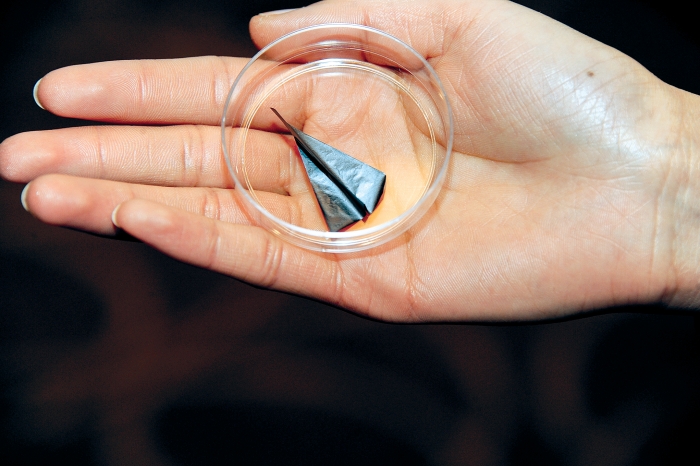 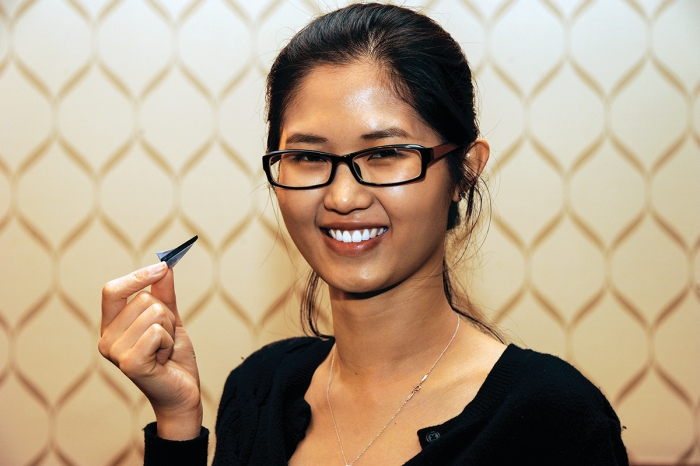 Several other research groups have also begun studying MXenes. At the University of Bath, in England, for example, Christopher Eames and M. Saiful Islam computationally screened the interactions of Li+, Na+, K+, and Mg2+ with a large number of MXenes in search of new high-capacity battery materials. They find that in terms of voltage and charge capacity the most promising M2C materials contain light transition metals such as scandium, titanium, vanadium, and chromium (J. Am. Chem. Soc. 2014, DOI: 10.1021/ja508154e).

And at Oak Ridge National Laboratory, Paul R. C. Kent and coworkers are also searching for new battery materials—in this case, for anodes for non–Li-ion batteries. They find that for Mg- and Al-ion batteries, bare MXenes have higher charge capacities and enable greater ion mobilities than O-terminated MXenes. They also find that the metal ion storage mechanism is more complicated in MXenes than in other materials. It involves reversible conversion reactions, ion insertion and extraction, and metal plating and stripping (ACS Nano 2014, DOI: 10.1021/nn503921j).

Energy applications aren’t the only ones on the minds of MXene researchers. At Yanshan University, in Qinhuangdao, China, scientists have found that titanium carbide (Ti3C2)with hydroxyl group terminations efficiently soaks up lead ions even in the presence of high concentrations of calcium and magnesium ions, suggesting a way to purify drinking water (J. Am. Chem. Soc. 2014, DOI: 10.1021/ja500506k). And according to a just-published study from Peking University, a polymer-brush-grafted form of V2C responds to changes in temperature and CO2 concentration, indicating that the hybrid material may function as a sensor (Chem. Commun. 2014, DOI: 10.1039/c4cc07220k).

It’s hard to guess what the next couple of years will bring to this new area of materials science. But it’s clear that this is only the beginning, Gogotsi says. Researchers have examined just a handful of the MAX phase starting materials, yet more than 70 of those compounds are known, he notes. “There is no reason to think that we have seen the best materials with the most impressive properties.”

Comments
Ismail Shahid (January 20, 2016 7:38 AM)
after making the MXenes structure, how and which position i intercalate the hydroxyl group
Reply »