An innovative method of three-dimensional printing promises to move the technology from one that makes test parts to a true manufacturing platform, say researchers who announced their chemistry-based feat last week in Vancouver.

For many end users, 3-D printing is synonymous with rapid prototyping. Existing 3-D printers can create custom, complex parts in a matter of hours, letting scientists and engineers quickly test and revise their designs for new tools and equipment. For some, though, conventional 3-D printers aren’t fast enough, and prototyping is a shortsighted goal. 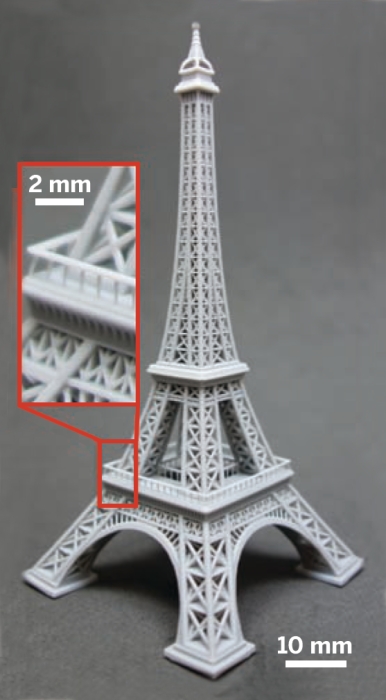 The new 3-D printing technology can cut print times from hours to minutes, its developers report (Science 2015, DOI: 10.1126/science.aaa2397). The boost in speed, they say, is what will move 3-D printing to the realm of manufacturing.

Traditional 3-D printers build objects by creating 2-D layers and adding them one on top of the other. There are a variety of techniques to do this, but every printer has to manage extraneous processes between each printed slice. For example, some printers have to flood their print platforms with fresh material that will harden or cure into the next layer.

Although these extra steps can be automated, they slow the printing process considerably, says Joseph M. DeSimone, a chemist at the University of North Carolina and North Carolina State University. DeSimone has been on academic leave from both institutions for the past two years to lead the team that has developed the much faster technique.

“I think of conventional 3-D printing as a celebration of mechanical engineering,” he tells C&EN. The new technology, however, relies more on chemical processes. DeSimone says of his team: “We don’t print objects. We grow them.”

The team’s new machine pulls its product upward out of a liquid resin reservoir while the structure is being printed. Ultraviolet light shines through a window under the reservoir, illuminating the trailing edge of the advancing part and curing it.

The window is made from an oxygen-permeable fluorinated polymer, Teflon AF 2400. This allows oxygen to seep into the resin reservoir and inhibit the photocuring process near the window’s surface, where the resin’s oxygen concentration is highest. The resin’s oxygen level drops off away from the window, until it becomes low enough that UV light can initiate curing.

Because the printer cures resin in the bulk—rather than on top of the window as would be the case in a more conventional printer—the reservoir can passively and continually supply fresh, uncured resin to the part. As a result, the printer appears to drag fully formed solid objects out of the liquid resin, printing them 25 to 100 times as fast as conventional methods and without 2-D layers, DeSimone said.

“I think it’s a really powerful example of how you can use relatively simple—but very clever—ideas in chemistry to revolutionize an emerging technology like 3-D printing,” says John A. Rogers, a materials scientist at the University of Illinois, Urbana-Champaign.

DeSimone announced the printer and Carbon3D, the company he cofounded to develop the technology, at a TED Conference, where invited speakers talk about big ideas with support from the nonprofit TED organization. With the backing of prominent Silicon Valley investors, DeSimone and Carbon3D are working to further boost the machine’s print speed.

The printers already work so quickly that the process causes them to heat up, he says. “We have to start thinking about cooling our printers.”

3-D Printing
Oil and water emulsion provides support for 3-D printing of liquid polymers
3-D Printing
3-D printer can build meter-tall objects in just a few hours
Electronic Materials
The first fully printed electronics roll off printers ready to use
Share X
To send an e-mail to multiple recipients, separate e-mail addresses with a comma, semicolon, or both.
Title: Chemistry Is Key To 3-D Printer’s Record-Setting Speed
Author: Matt Davenport
Chemical & Engineering News will not share your email address with any other person or company.