Drug companies looking to add to their pipelines in today’s heady biotech environment walk into negotiations prepared for sticker shock. The premiums are particularly high in the hot field of immuno-oncology.

But few deals were as breathtaking as Bristol-Myers Squibb’s recent purchase of Flexus Biosciences. In February, the big pharma firm agreed to pay the biotech up to $1.25 billion for access to a series of compounds that haven’t even been tested in humans.

The purchase came just 15 months after San Carlos, Calif.-based Flexus closed its first round of financing. But its chemist founders aren’t done yet. The deal allows Terry Rosen, Flexus’s chief executive officer, and Juan Jaen, head of R&D, to form a new company where they plan to turn out one new immuno-oncology drug candidate per year.

START UP, TEAM UP
[+]Enlarge
Credit: Flexus
Jaen (left) and Rosen outside their California facility. 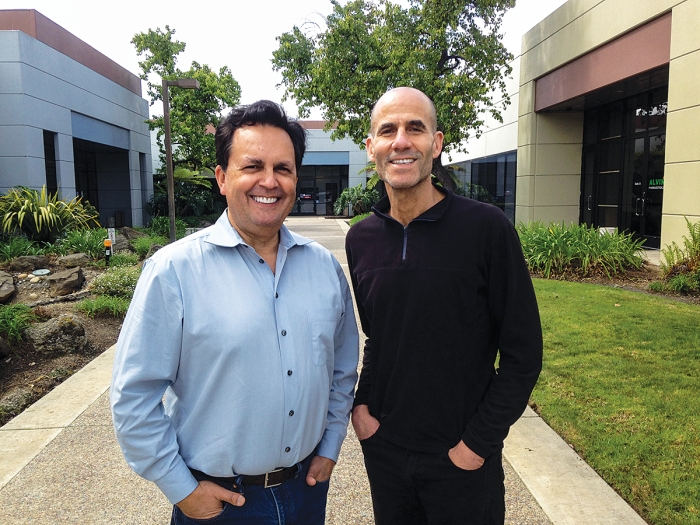 Credit: Flexus
Jaen (left) and Rosen outside their California facility.

Rosen and Jaen started Flexus in 2013 with a simple proposition: If you pick promising, but underappreciated, immunology targets and put them in the right hands, you’ll arrive at meaningful drug candidates. They weren’t basing their ambitions on any special technology; the firm launched only with “whatever resides inside our skulls, which may not be much,” Jaen jokes. Rather, they were relying on their decades of experience in drug discovery to build a company that could work smartly and efficiently.

They were also relying on a shared view of drug discovery that stems from 30 years of friendship. The two chemists met when Rosen was an undergraduate doing research in the University of Michigan, Ann Arbor, lab where Jaen was completing his doctorate. Although they joined different big pharma companies early in their careers, the scientists kept in touch and eventually both ended up in South San Francisco with Tularik.

After Amgen acquired Tularik in 2004, Rosen stuck around as vice president of therapeutic discovery. Jaen left Amgen to head up research at ChemoCentryx, which was developing drugs for autoimmune and inflammatory diseases.

By 2013, both were itching to do something entrepreneurial, and it made sense to team up. In considering what therapeutic avenues to pursue, they looked for what Jaen calls “the Goldilocks targets”—biological targets that are validated but aren’t being pursued by crowds of companies.

Around that time, big pharma firms were in the initial throes of what has become a fierce competition to develop checkpoint inhibitors—antibodies that block one of a collection of proteins that signal the immune system not to respond to a substance.

Amid the growing mania for cancer immunology, the Flexus founders saw their Goldilocks: IDO1 and TDO2, enzymes known for helping cancer cells hide from an immune response. The targets were getting little attention, but inhibitors of them are likely to be complementary to the immuno-oncology antibodies.

The next step was to put the targets in the hands of the right people to translate them into drug candidates. But opinions vary on who those people are. In the start-up world, so much is about the “showmanship of just rolling out your Nobel Prize-winner founders, luminaries, and other people who are really smart and really good at many things, but quite often, drug discovery is not one of them,” Jaen says.

For Rosen and Jaen, the right hands meant scientists with a track record for drug discovery. The pair mined their network and wound up hiring a team that skews heavily toward veterans of Tularik and Amgen.

Their goal was to build a real discovery engine—not a virtual one. At a time when many start-ups rely almost entirely on outsourcing, Rosen and Jaen are believers in the art of designing drugs in their own labs.

“There are a lot of things the world has started to treat as a commodity in terms of drug discovery that we don’t really believe is a commodity,” Rosen says. “We wanted to get the best medicinal chemists and biologists.”

Supported by $38 million in financing, the team of more than 30 scientists was able to swiftly generate a series of IDO1 inhibitors that became the object of several firms’ affection. After a highly competitive process, BMS agreed to acquire the firm for $800 million up front and up to $450 million in milestones.

Being acquired doesn’t mean the end of the team that Rosen and Jaen built. That’s because the deal is structured such that BMS keeps only the IDO1 and TDO2 compounds and spins off the rest of the assets, including its people and labs, into a new company.

The spin-off will likely be funded by the investors who backed Flexus and are no doubt happy with their first investment. Rosen and Jaen believe they can repeat their success and bring out one new drug candidate every year.

The most advanced project at the new firm will be FLX925, a dual inhibitor of FLT3 and CDK4/6 licensed from Amgen last May. The company expects to ask the Food & Drug Administration to start human studies of an internally developed small molecule against another immuno-oncology target next year.

The partners are aware that repeating the success of the IDO1 program will be tough. “We’ve done some good initial work, and we feel good about it, but our goal is to build something that is long term and sustainable,” Rosen says.

Mergers & Acquisitions
Pfizer to buy Array for $10.6 billion
Business
Immuno-oncology start-up Arcus emerges
Business
Cancer Drugs Were Most Sought After In 2015
Share X
To send an e-mail to multiple recipients, separate e-mail addresses with a comma, semicolon, or both.
Title: Entrepreneurs: After A BMS Buyout, Flexus’s Chemist Founders Start To Write Their Next Chapter
Author: Lisa M. Jarvis
Chemical & Engineering News will not share your email address with any other person or company.