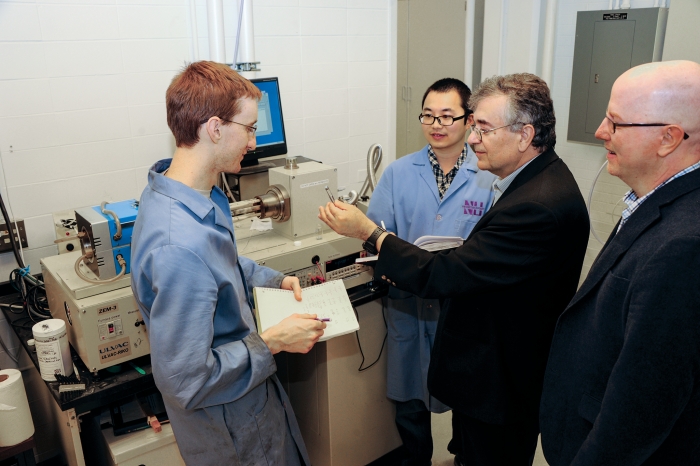 Once in a while, a well-established but quiet scientific field reawakens with a burst of new research activity. That’s what’s happening now in thermoelectrics. These technologies, which can heat and cool, as well as generate power, have been known for ages. But in the past several years, after decades of sleepy-paced progress, the field has come roaring to life, thanks to discoveries and advances in materials science.

“Thermoelectrics has never seen a better time than now,” asserts Mercouri G. Kanatzidis, a Northwestern University chemistry professor and a specialist in the inorganic solids that underpin the field.

Vinayak P. Dravid, a materials scientist and Kanatzidis’s Northwestern colleague, describes the upswing in interest as a “thermoelectrics renaissance.” One sign of the rebirth is the fourfold increase in papers published annually on thermoelectrics over that past dozen years, with rates now reaching 2,000 per year. Also increasing are the number of thermoelectrics symposia, research seminars, and commercial products. 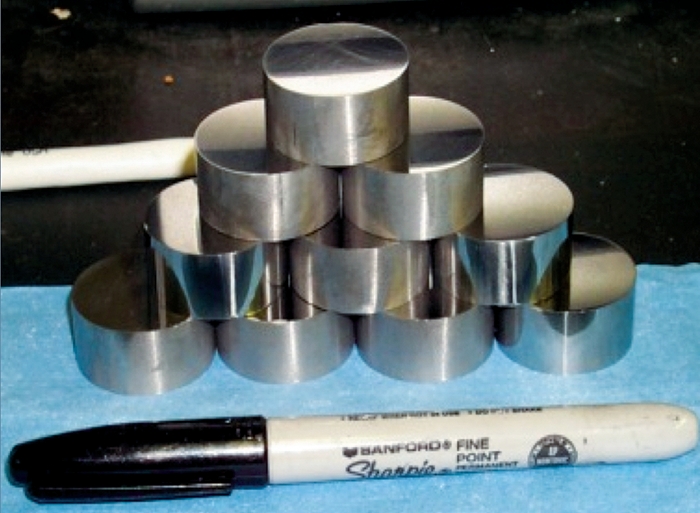 As its name implies, thermoelectrics is a branch of science that deals with interconnected heat and electrical phenomena. More specifically, the field focuses on solids that can convert heat to electricity and vice versa at high enough efficiencies that they can find use in devices. Bismuth telluride, Bi2Te3, is one of the longest-known and best-studied examples. In fact, 50 years ago, a few manufacturers were using it to make specialty cooling and power-supply devices.

SKUTE OVER
[+]Enlarge
Credit: Phys. Chem. Chem. Phys.
These puck-shaped ingots (top) are made from high-purity skutterudite, a cobalt antimony mineral. These samples were incorporated into the thermoelectric power modules shown here (~5 cm x 5 cm), which generate electricity when the top and bottom sides of the modules are held at different temperatures. 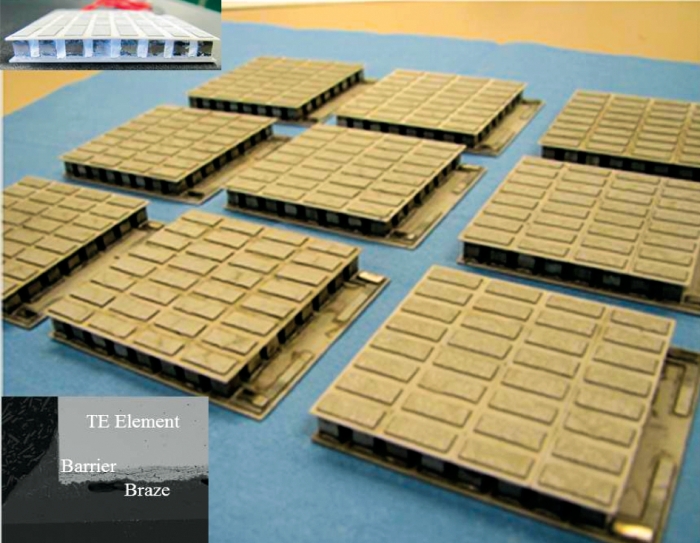 Credit: Phys. Chem. Chem. Phys.
These puck-shaped ingots (top) are made from high-purity skutterudite, a cobalt antimony mineral. These samples were incorporated into the thermoelectric power modules shown here (~5 cm x 5 cm), which generate electricity when the top and bottom sides of the modules are held at different temperatures.

For example, bismuth telluride generators were used to provide power to National Aeronautics & Space Administration satellites by thermoelectrically converting heat from a radioactive source to electricity. The technology provided long, maintenance-free service lives, making it well suited for use in remote or inaccessible locations.

Around the same time, General Electric, Westinghouse, and other major appliance manufacturers saw big opportunities to market thermoelectric consumer goods. In the early 1960s, they made household refrigerators that were cooled with bismuth telluride. But the refrigerators couldn’t compete with the mechanical type in price and cooling efficiency and were soon discontinued, as was most activity in the consumer thermoelectrics market.

In contrast, research on military and aerospace applications continued steadily. But it did so without much fanfare, and over the next several decades, thermoelectrics became a relatively obscure topic.

The problem, says Kanatzidis, is that “for years, the pickings were pretty slim, in terms of classes of materials.” But things have changed recently. “We keep finding new surprising materials,” he says, “materials you would have never thought would be useful for thermoelectrics.”

Recognizing new thermoelectric materials requires knowing the history of the field, which dates back to 1821. In that year, Thomas Johann Seebeck, a German physicist, discovered that he could generate an electric current and magnetic field in a loop made from two types of metals, if he kept one side of the loop warm and the other cool.

Thirteen years later, French physicist Jean-Charles-Athanase Peltier made another key discovery. He found that a current applied across a junction of two different electrically conductive materials can heat up or cool down the materials. If one direction of current flow causes the junction to warm up, then reversing the direction will make it grow cold.

Another 20 years later, William Thomson, later known as Lord Kelvin, showed that the Seebeck and Peltier effects are interrelated. His finding means that a thermoelectric material can be used to generate power in a temperature gradient and pump heat when subjected to an applied current.

“Many properties have to come together in a single material for it to be useful in thermoelectrics,” Dravid says. It must have high electrical conductivity, low thermal conductivity, and high thermoelectric power—a measure of the relation between the temperature difference across a junction and the resulting voltage. The material also must be stable and physically strong.

It’s difficult to find the right balance of these properties, Dravid says. “If you try to enhance a material’s electrical conductivity, almost invariably you also increase its thermal conductivity.” The change in one parameter improves thermoelectric performance, but the other change ruins it.

For a long time, it seemed that researchers wouldn’t find materials with a ZT value greater than 1.0. In recent years this barrier has been surpassed repeatedly, by Bi2Te3-based alloys, PbTe, PbSe, SiGe, and other compounds, rekindling interest in thermoelectrics and spurring development of new commercial applications. The range of products remains small, but new ones have made their way recently to military and civilian markets.

For example, small thermoelectric coolers are used to chill infrared detectors in night-vision goggles and telescopes and to provide cooling for telecommunication equipment and pilot flight suits. These heating and cooling devices are also found in climate-controlled automobile seats and laboratory equipment such as polymerase chain reaction systems, which require precise temperature cycling.

One application area currently buzzing with R&D activity is waste-heat recovery. Scientists in industry and academia are developing new thermoelectric materials and devices that can generate electricity efficiently from heat recovered, for example, from the exhaust of vehicles and industrial plants. By returning captured energy to the vehicle or plant, these devices lower operating costs and reduce fuel and energy consumption.

“For a large-scale application to be successful commercially, the thermoelectric material needs to be abundant and inexpensive,” says John P. Reifenberg, vice president for process development at Alphabet Energy, in Hayward, Calif. The company manufactures thermoelectric generators for waste-heat recovery in various industries, including oil and gas production and mining.

Alphabet avoids using bismuth telluride, lead telluride, rare-earth elements, and other costly substances now found in common thermoelectric materials. Instead, the company’s devices, which are designed to be attached to a diesel engine’s exhaust flue, are made from two plentiful materials, magnesium silicide, a member of an established family of thermoelectrics, and tetrahedrite, a newcomer.

“You can literally dig tetrahedrite out of the ground,” Reifenberg notes. The material is composed of common copper-antimony-sulfur mineral compounds. Much of the research underpinning its use in thermoelectrics was carried out by Michigan State University physicist Donald T. Morelli, whose group continues to study various aspects of the material.

For example, in 2013, the group reported that mixing natural tetrahedrite with small amounts of elemental copper, antimony, and sulfur by ball milling without heating is a simple, low-cost way to make a thermoelectric material with a ZT value of roughly 1.0 (MRS Commun., DOI:10.1557/mrc.2013.26). And earlier this year, they showed that adding a small amount of zinc to a common nickel-doped tetrahedrite (Cu12Sb4S13) increased its initially low ZT by more than 30% to just over 1.0 (Chem. Mater. 2015, DOI: 10.1021/cm502570b).

Skutterudites, a group of cobalt-antimony based compounds, are another thermoelectric material drawing attention for waste-heat recovery. James R. Salvador and coworkers at General Motors work with scientists at other firms, including Delphi and Marlow Industries, to develop thermoelectric generators that fit in the exhaust manifold of passenger vehicles to improve fuel economy by reducing energy consumption. The target fuel economy increase set by the Department of Energy is 5%, which Salvador describes as “very challenging.”

POWER BLOCKS
[+]Enlarge
Credit: Alphabet Energy
A combination of magnesium silicide and a copper-antimony-sulfur mineral known as tetrahedrite endows these millimeter-sized blocks with the ability to convert waste heat from industrial equipment to electricity. 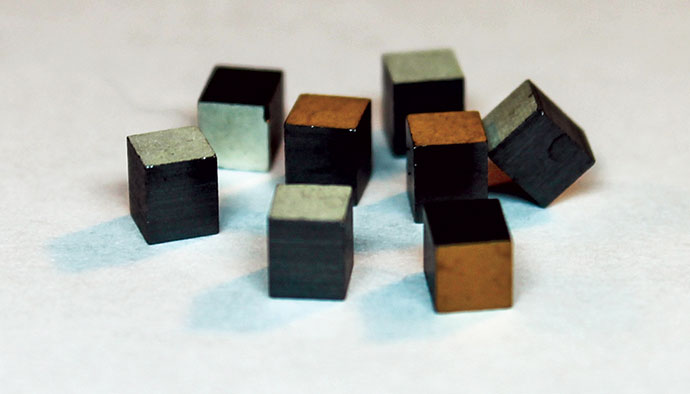 Credit: Alphabet Energy
A combination of magnesium silicide and a copper-antimony-sulfur mineral known as tetrahedrite endows these millimeter-sized blocks with the ability to convert waste heat from industrial equipment to electricity.

According to Salvador, skutterudites are well suited for this application because their ZT values are greatest at the high temperatures typical of automobile exhaust systems. In earlier work, the team showed that reacting, or filling, skutterudites with rare-earth elements such as lanthanum and ytterbium was an effective way to boost ZT values. But in an effort to reduce costs and the dependence on rare-earth compounds, which in recent years have been in short supply, the team now fills skutterudites with alkaline earth elements.

What they learned was unexpected, Salvador says. In a study of Ba-, Sr-, and Ca-filled samples, they found that thermal conductivity decreased with the mass of the element filling the skutterudite. One would expect a sample with heavy, slowly vibrating atoms to be unable to readily transport heat through its lattice, and thus be a poorer thermal conductor than a material with lighter atoms. But they observed the opposite effect. The explanation, supported by computational analysis, is based on certain types of previously unrecognized lattice vibrations. The upshot is that the skutterudite thermal conductivity is about the same whether the filler is calcium or rare-earth lanthanum (Acta Mater. 2015, DOI: 10.1016/j.actamat.2015.03.032)

As with other solids, tin selenide’s ultralow thermal conductivity can be rationalized by analyzing its bonding and vibrational characteristics. Even so, the take-home message, according to Dravid, is to remain open-minded. “We tend to think that complex problems require complex solutions. Sometimes it’s surprisingly simple.”

The field was stagnant for years, but now it has sprung back to life and is presenting researchers with new challenges and opportunities. Dravid says he’s like “a kid in a candy shop. I have never been so excited as in the past five years.”

Comments
Orhan Ates (January 16, 2016 3:55 PM)
Please give me a lot information about thermoelectric generator. Can I use this converter cement plant instead of waste heat recovery system. I'm willing to develop in my plant.