TWO-STEP
Credit: Science
Transmission electron microscope imaging of calcium carbonate nucleation shows formation of an amorphous particle that transforms into crystalline aragonite. Data were collected at 5 frames/second, three-quarters of the frames were discarded, and the movie plays at 12 times normal speed.

For an oyster growing a shell, a food scientist striving for the perfect ice cream, or a pharmaceutical operator isolating a drug, crystallization is king. Even though the crystal growth process is vital to so many lives and consumer goods, its first and most important step—nucleation—is still largely a mystery.

But with advances in instrumentation, scientists are now beginning to uncover more detail of how ions or molecules assemble into ordered structures. The emerging picture reveals processes more complex than traditionally understood.

“The most common misconception about nucleation is that we understand it and we know how to control it,” says Peter Vekilov, a professor of chemical and biomolecular engineering at the University of Houston.

Ultimately, researchers studying nucleation hope to better regulate crystallization by bringing fundamental understanding to what is now an empirical science. Well-controlled crystallization in industry usually comes through experimental trial and error, Vekilov emphasizes. “You come up with recipes, and they work,” he says. “But when you start with a new system, everything you already know doesn’t apply.” The trial and error starts over.

The conventional view of nucleation, a seeding step that ultimately determines several properties of the crystal formed, is that it proceeds through a classical pathway. In this model, ions or molecules come together into an embryonic cluster that is ordered in the same way as the eventual crystal. The ions or molecules continue to add on one by one to extend the lattice.

As these building blocks come together, the free energy of the bulk crystal decreases. At the same time, the cluster’s solid-liquid interface expands, increasing free energy. Nucleation officially occurs when a cluster manages to reach a critical size at which the energetic benefit of growth outweighs the cost.

But “as people study nucleation more, they see that there seem to be different mechanisms to get to the crystalline state,” says Allan S. Myerson, a chemical engineering professor at Massachusetts Institute of Technology. Researchers are now finding that nucleation can also be a two-step process in which molecules gather into some sort of dense liquid droplet or other amorphous grouping that then reorganizes into an ordered structure. The reorganization is the nucleating and rate-determining step.

One system in which researchers see evidence for a two-step nucleation process is glycine. Back in 2002, Myerson and colleagues induced crystallization in glycine solution using laser pulses. “We formed different crystal polymorphs based on the polarization state of the laser,” Myerson says. “That implies that we could affect the arrangement of some entity already existing in solution, as opposed to molecules adding one by one” (Phys. Rev. Lett. 2002, DOI: 10.1103/physrevlett.89.175501). 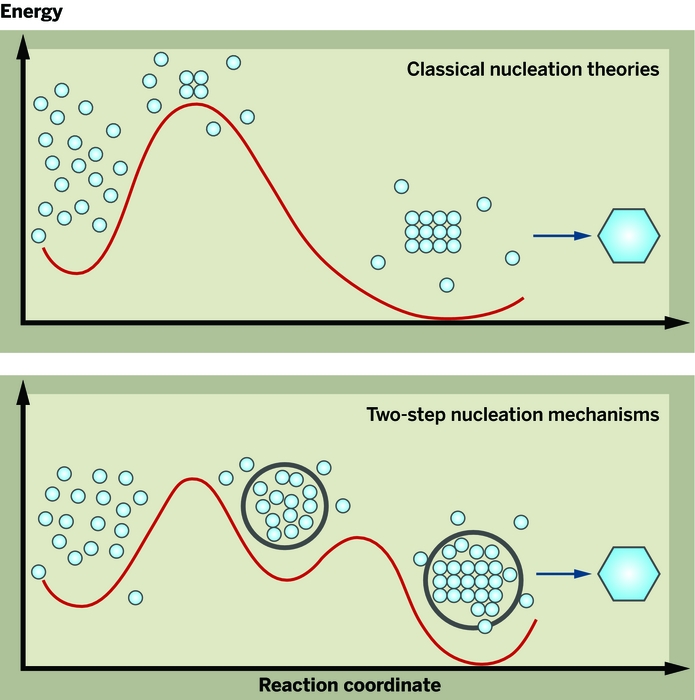 Credit: Adapted from Science
In the classical view of crystal nucleation, ions or molecules come together from the start in an ordered arrangement (top). In a two-step mechanism, entities form an amorphous droplet or cluster that then rearranges into crystalline form (bottom).

More recently, liquid-cell transmission electron microscopy imaging of calcium carbonate nucleation revealed multiple crystallization pathways occurring at the same time in a single solution (Science 2014, DOI: 10.1126/science.1254051). Calcium carbonate can crystallize into several different forms, including calcite, aragonite, and vaterite. While some of the material appears to nucleate directly into all three polymorphs, other molecules first aggregate into amorphous particles, some of which transform into aragonite or vaterite.

“Populations of clusters that exist before nucleation are much more complicated than what was ever envisioned classically,” says James J. De Yoreo, who led the calcium carbonate microscopy study as chief scientist of a materials synthesis and simulation initiative at Pacific Northwest National Laboratory. But exactly what role those clusters play in the eventual formation of stable crystals remains poorly understood.

De Yoreo adds that amorphous material can also be important after nucleation. Crystals may grow by adding ions or molecules one by one, fusing with another crystal, or combining with amorphous particles that crystallize upon attachment. “Think up any mechanism or pathway you want, and there will probably be some system that behaves that way,” De Yoreo says.

Nucleation in multiple steps doesn’t just occur for inorganic or organic small molecules, researchers are finding. Proteins and colloids also come together into dense liquid droplets from which crystals subsequently emerge. Forming those droplets—as well as amorphous particles of small molecules—is a complex process in its own right and may be key to understanding the origin of different crystal polymorphs and whether crystals grow into needles, plates, or other three-dimensional shapes, says Houston’s Vekilov, who studies nucleation of normal and sickle cell hemoglobin, lysozyme, and other proteins.

Another way in which nucleation is more complicated than the traditional view is that it’s very sensitive to small system perturbations, often in the form of impurities. “There are always bits of dirt, and no two pieces of dirt are identical,” says Richard P. Sear, a computational physicist at the University of Surrey, in England. In some cases, a nascent nucleus will fit into an impurity like a hand in a glove, in an interaction that promotes nucleation. And if the material takes a month to nucleate, that could be because a rare fluctuation occurred to get it over the energy barrier—or perhaps an impurity oxidized into a nucleation-friendly form, Sear says.

Although modern imaging techniques are providing unprecedented views of chemical systems, a crystal nucleus is still beyond their reach. It’s tiny, transient, and “you can’t see the nucleation event itself,” Sear notes. As researchers persist in studying nucleation theoretically and experimentally, however, they will continue to unravel details about this fundamental process. ◾

Imaging
Watching crystal nucleation happen at atomic scale
Materials
Atomic force microscopy and infrared spectroscopy combine to give close-up look at organic matter in shale
Materials
Stable colloids made with inorganic molten salts
Share X
To send an e-mail to multiple recipients, separate e-mail addresses with a comma, semicolon, or both.
Title: Illuminating Crystal Nucleation
Author: Jyllian Kemsley
Chemical & Engineering News will not share your email address with any other person or company.

Jim Parsons (February 20, 2015 4:40 PM)
Liked this article. Interesting. Oddly enough that turned out to be the main subject of my Masters thesis about the nucleation of polymers, both from the melt phase and the solvent phase. I think that I may have been the first to come to this conclusion, according to my then Academic Adviser, Dr. John Bendler. And resulted in a patent for paints and other liquid phase polymers. The results were described in an article that appared in the trade magazine, Paint and Coatings Industry (PCI), September 2007, starting on page 92. If any one is interested in this information or purchasing the patent, I can be contacted through the ACS or the enclosed e-mail address as my ontact information has changed.
Reply »