A look at recent patenting activity in these water-retaining polymers, brought to you by C&EN and CAS

Hydrogels, networks of either natural of synthetic polymers, earned their name because of their ability to absorb large amounts of water. Traditionally, the materials have been used in contact lenses and wound dressings, products for which moisture retention is vital. More recently, though, researchers have been bestowing additional functionality upon the gels so that they can perform more sophisticated biomedical tasks, according to Chemical Abstracts Service’s databases. Here, we highlight three innovative hydrogels. 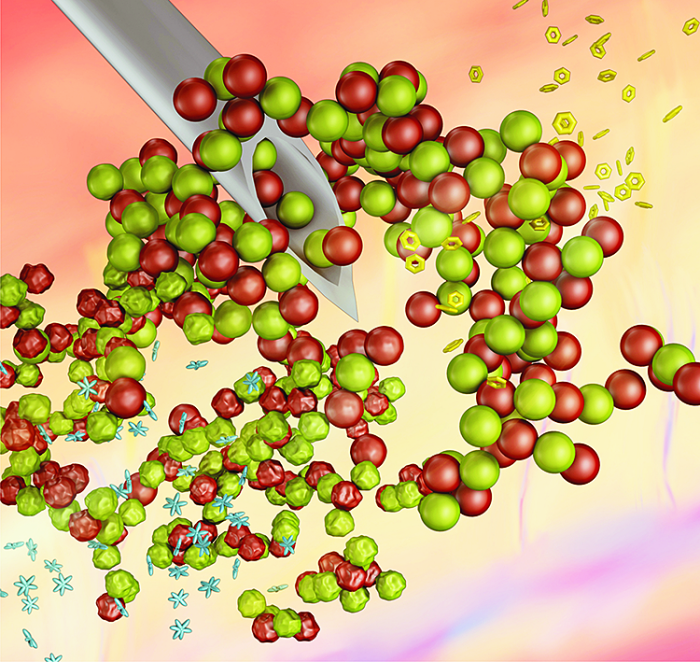 People normally wear contact lenses to correct their eyesight. But one day, the polymer lenses might be harnessed for other medical applications such as health monitoring. In a 2015 patent, Randall Braxton Pugh of Johnson & Johnson Vision Care reports contact lenses made from either silicone hydrogels or fluorohydrogels that can wirelessly communicate with devices such as PCs, tablets, and cell phones to report health data (US 20150063605). Hydrogels help contact lenses stay moist and allow oxygen to reach the eye, preventing damage to the cornea. Braxton Pugh’s proposed contact lens sports a clear “optic zone” in the center and an embedded microacoustic element and microfluidic biosensor around the edge, out of a person’s line of sight. The biosensing lens could be designed to sample a wearer’s tears for biomarkers of high blood pressure, for example. If the biomarker level breaches a certain threshold, the sensor would transmit a signal to a wireless device, which would then induce the microacoustic element to send a warning sound to a person’s inner ear via bone conduction.

[+]Enlarge
Credit: Courtesy of Tiffany Vo
An injectable hydrogel goes from liquid to gel (left to right) when raised to body temperature.

Credit: Courtesy of Tiffany Vo
An injectable hydrogel goes from liquid to gel (left to right) when raised to body temperature.

For patients with diabetes, regular insulin injections and finger pricks to monitor blood glucose are a necessary burden. Implantable devices that deliver insulin and measure glucose levels are in clinical trials and could make life easier for these patients, but the systems have their limitations. For example, devices that detect glucose using glucose oxidase need more dissolved oxygen to function efficiently than may be available in blood. Other devices damage surrounding cells. Recently, injectable systems based on phenylboronic acid (PBA), a glucose-binding moiety, have attracted attention from researchers. Robert S. Langer and colleagues at MIT have now designed an improved PBA-based hydrogel that, when injected under the skin, reacts to changing blood glucose levels to avoid hyperglycemia (too much blood sugar) and hypoglycemia (too little blood sugar) (US 20150025005). Their glucose-binding hydrogel is made of peptides that have hydrophobic regions linked to PBA. It also traps insulin within its gel matrix. When glucose binds to the PBA groups, the hydrogel’s structure changes and the system releases insulin. After the insulin reduces a patient’s blood sugar levels, glucose vacates the hydrogel, and the material reverts to its original shape, once again entrapping insulin. The technology has already been licensed.

During cosmetic reconstructive surgery, doctors often implant polymeric scaffolds to aid tissue regeneration. Injectable scaffolds, which would cause less trauma, could be an improvement over implants. Antonios G. Mikos and coworkers at Rice University have now developed injectable thermogelling hydrogels capable of serving as tissue scaffolds (US 20150079020). Poly(N-isopropylacrylamide)-based hydrogels have shown promise, but they have a tendency to shrink once inside the body. To stabilize their hydrogel, the Rice University inventors add polyamidoamines as temperature-responsive cross-linkers. When injected into the bodies of animals during preclinical testing, the new scaffolds transform from liquid to gel in response to the animals’ higher internal temperature, and they fill voids left behind by injuries.

Share X
To send an e-mail to multiple recipients, separate e-mail addresses with a comma, semicolon, or both.
Title: Patent Picks: Hydrogels
Author: Science, Technology & Education Department
Chemical & Engineering News will not share your email address with any other person or company.