Tire Friction Studies Reveal How The Rubber Meets The Road 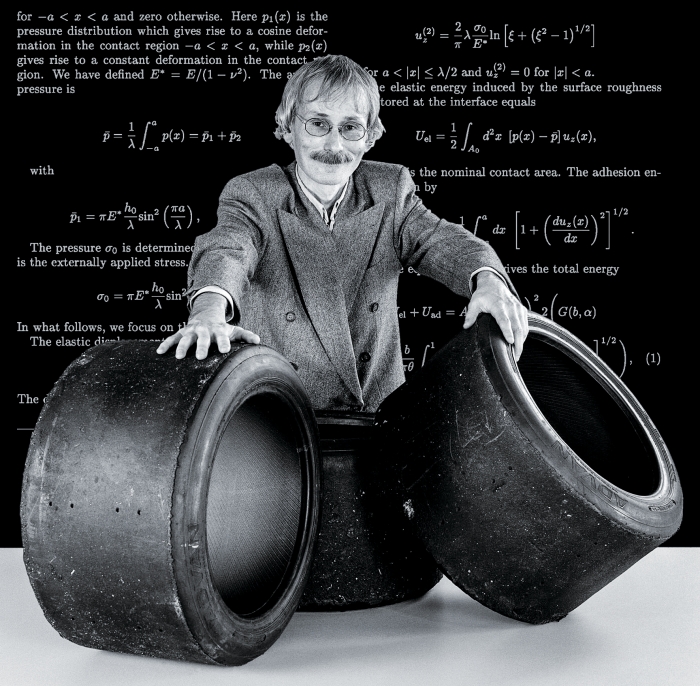 Like other experienced drivers, when Bo N. J. Persson steps on the gas, applies the brakes, or heads into a turn, he automatically checks road and traffic conditions to make sure he’s driving safely. But unlike most motorists, Persson also thinks about rubber viscoelasticity, shear forces, and road surface topography.

For 20 years, Persson, a staff researcher at the Jülich Research Center in Germany, has been trying to understand the fundamental processes that cause friction—especially between automobile tires and road surfaces. He’s developed a mathematical theory that encompasses numerous aspects of this everyday phenomenon, which is critical to ensuring that automobiles hug the road securely. Several pieces of the friction puzzle remain missing. But one of them, which describes the conditions under which polymer chains on tire surfaces briefly stick to roads, has just been uncovered. The finding helps provide a more complete picture of rubber-road tribology, a topic that includes friction, wear, and lubrication.

“Tribology tends to be a neglected subject,” Persson says. One reason it typically isn’t covered in university courses, he says, is the absence of a rigorous theory describing the underlying phenomena. Yet the details of rubber friction, though complex in nature, have major practical applications for manufacturing tires and other products. “If you understand the details at the most basic level, then you can start making logical tire design changes,” he asserts.

A successful tire design needs to meet a few main performance criteria, including low rolling resistance, low wear rates, long lifetimes, and high friction during braking. Accommodating some of those criteria, such as low rolling resistance and high braking friction, “is tricky because they seem opposed to one another,” Persson says. If researchers understood the origins of those parameters in detail, much of the design work could be done through computer modeling. Instead, he says, engineers mainly analyze tire design through trial and error, which is slow and costly.

One important rubber property is viscoelasticity, the tendency of the material to deform under a pressure—like the one caused by a car’s weight pressing a tire against small road bumps. Those interactions cause rubber molecules inside a tire to move and vibrate. The extent of that energetic molecular commotion, which depends on the nature of the rubber and roughness of the road, strongly influences a tire’s rolling resistance and overall friction properties.

But a new study conducted by Persson and coworkers, including Seungkuk Nam, a rubber friction specialist and mechanical engineer at Hankook Tire, in Daejeon, South Korea, shows that shearing between the tire surface and the road also contributes significantly to tire friction under some conditions. This shearing is the result of small-scale dragging of polymer molecules as the tire rolls down the road.

In the study, the team analyzed friction properties of three tire tread compounds—those used in summer, winter, and all-season formulations—on two asphalt road surfaces and on a sandpaper surface. They used a stylus instrument and an atomic force microscope to measure the topographies of the tire and road surfaces on multiple length scales. They conducted friction measurements as they dragged the materials on the surfaces at a variety of temperatures but at low speeds to avoid frictional heating.

The team found that dragging forces between the tire and road caused a type of sticking friction arising from polymer chains adhering to the road surface, stretching, breaking free, and reattaching repeatedly (J. Chem. Phys. 2015, DOI: 10.1063/1.4919221).

Persson emphasizes that the new results apply only to low sliding speeds and dry surfaces. He explains that on wet surfaces, a nanometer-thick film of water between the rubber and the road inhibits shearing processes, leaving mainly the viscoelastic contribution to friction.

In addition to uncovering a new component of tire friction, the study again confirms the accuracy of Persson’s mathematical theory: Velocity- and temperature-dependent data calculated using the theory closely match the measured data. Persson’s theoretical formulation, now available as software modules from Multiscale Consulting, is used by several tire industry scientists, who rave about it.

For example, Toshio Tada, a research manager at Sumitomo Rubber Industries, in Kobe, Japan, uses the software to help design tires that perform well on wet roads. “Until recently, there was no reliable predictor for wet grip performance,” he says. “Time-consuming and expensive trial-and-error testing using prototype tires was inevitable.”

Now, Tada’s group can predict friction coefficients for various types of road surfaces and conditions and knows which tire material and mechanical properties are most important for friction. The advance has enabled Sumitomo to reduce the duration of R&D programs, he says.

Hankook’s Nam is similarly enthusiastic. His team puzzled over results of tests designed to evaluate variations in road surface roughness and braking performance. He acknowledges that “for a long time, we struggled to figure out which properties of road surfaces are important for rubber friction.” Since using the new software, the Hankook group has gotten a good grip on those friction parameters. “We now quantitatively understand the role of surface roughness on multiple length scales,” he notes.

Some unknowns still remain, however. For example, Nam says, it’s still difficult to use theory to predict what happens when dust, rubber particles, and other microscopic debris work their way between the tire and the road. It’s also challenging to understand how viscoelasticity is affected by interactions between polymer chains and the carbon and silica particles commonly used in tire manufacturing.

Answering those questions and others, in part, will help further the understanding of tire friction. And with that, scientists may soon finally know what happens when the rubber meets the road.