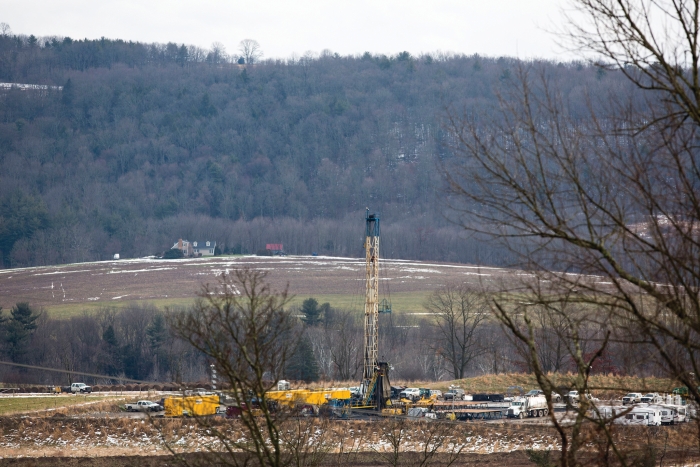 Credit: Newscom
The Marcellus Shale stretches across West Virginia and Pennsylvania and into Ohio and New York. Strontium, barium, and bromine found in the geologic formation can act as natural tracers in produced water.

Five years ago, Congress asked the Environmental Protection Agency to evaluate the potential for hydraulic fracturing to harm the U.S. drinking water supply. Earlier this month, the agency released its long-awaited draft report and concluded that the controversial oil and natural gas extraction technique has had no “widespread, systemic impact” on water resources.

EPA warned, however, that the technology commonly known as fracking can pose water quality risks in specific situations. The agency identified several areas of “potential vulnerability,” including spills of the fluids used in fracking operations, inadequate treatment and disposal of wastewater, and poorly constructed wells.

Although water quality problems have occurred at some well sites, the agency said there have been relatively few issues.

Thomas A. Burke, deputy administrator for EPA’s Office of Research & Development, stressed that the study focused on “how we can best protect our water resources. It’s not a question of safe or unsafe.”

But use of the technology has generated an intense backlash among environmental activists, who say fracking can pollute nearby freshwater supplies. They discount EPA’s study, charging it is too narrow in scope and based largely on theoretical modeling.

“The lack of actual field data calls into question how definitive EPA can actually be in suggesting that there isn’t evidence of systemic water contamination,” says Mark Brownstein, vice president for the climate and energy program at the Environmental Defense Fund. “I think that anyone who reads this study and thinks that this issue has been put to bed is sadly mistaken.”

One issue that EPA had indicated it would examine is the use of chemical tracers for monitoring fracking fluids. The simple hydrological method was included in the agency’s November 2011 study plan on the basis that a chemically stable tracer mixed in with a fracking fluid might offer some insight about its environmental fate.

“The tracers may be used to determine if fracturing fluid migrates from the targeted formation to an aquifer via existing natural or man-made pathways,” the agency wrote in the 2011 plan. But in the final report, tracers are mostly absent: Only one case study includes a perfluorocarbon tracer.

“Tracers would be a blessing and a curse to the industry,” says Briana Mordick, a staff scientist with the Natural Resources Defense Council, an environmental group. The fracking industry would “have a more definitive way to prove that they aren’t involved” in water supply contamination, she says. “But it also could make it really hard to deny that they aren’t responsible.”

“The status quo right now is that it can be really difficult to distinguish contamination caused by oil and gas from contamination from natural causes,” she adds.

The use of fluorescent dyes, salts, and stable isotopes has been commonplace for decades in hydrology to track surface and groundwater. “People are worried that contamination can get out of shale gas wells somehow and get into groundwater,” and a tracer seems like a direct way of figuring that out, says Susan L. Brantley, a geochemist at Pennsylvania State University.

What Brantley and other geochemists do, she says, is look for natural tracers such as strontium, barium, and bromine that are already in the water they’re sampling.

“People have talked about the possibility of using tracers for a long time, but I’m not sure it’s being done in any real way,” says Avner Vengosh, an environmental geochemist at Duke University.

Like Brantley, Vengosh searches for natural tracers in fracking wastewater that can give him clues to the water’s source (C&EN, March 16, page 8). “Why would the industry let someone put in a tracer to find wrongdoing?” he asks.

Although there is little available evidence to suggest that tracers are being used widely by the oil and gas industry to track the movement of fracking fluids, a niche industry has grown around tracers used to improve the efficiency of frack jobs.

“This is a way for oil and gas to be more efficient in production, and for oil and gas producers to know more about what’s happening with their wells,” says Justine C. Kmiecik, chief executive officer of BaseTrace, a start-up located in Research Triangle Park, N.C. (C&EN, May 12, 2014, page 31).

C&EN reached out to a number of energy industry representatives, but all declined to comment on the use of tracer technology.

EPA’s fracking study will be reviewed by a research advisory panel comprising industry and academic scientists. Brantley is a member of that panel but says she is not authorized to speak about the study.

Pollution
Satellites can now see air pollution inequality within cities
Persistent Pollutants
Goodbye to some PFAS in food packaging
Pollution
Mercury makes it deep into marine trenches
Share X
To send an e-mail to multiple recipients, separate e-mail addresses with a comma, semicolon, or both.
Title: Fracking Study Yields Mixed Results
Author: Jessica Morrison
Chemical & Engineering News will not share your email address with any other person or company.

Comments
Robert Buntrock (June 10, 2015 3:51 PM)
There seems to be no mention of methane leakage into ground and well water, a common problem in the fracking fields of Pennsylvania and possibly elsewhere. Inadequate casing and other inadequate drilling processes have been blamed but that also needs to be analyzed and regulated.
Reply »

Jessica Morrison (June 11, 2015 8:55 AM)
Hi Allison! Thanks for reading, and taking the time to comment. We wrote about the possible link between wastewater injection and earthquakes earlier this year, and I'm keeping an eye on that topic as more information becomes available. Here's the link to our previous story: http://cen.acs.org/articles/93/i7/Environmental-Protection-Agency-Report-Links.html

Richard Lawuyi (June 18, 2015 7:36 AM)
Can fracking cause earthquakes ?
How are the chemicals and polymers used in fracking disposed of
Reply »

Cosette (June 20, 2015 8:30 AM)
Thanks for an update on the risk of harm to the US drinking water by fracking and the results of an EPA study that was 5 years in the making. I would be interested in learning about the process that is "based largely on theoretical modeling". I would imagine that as the methodology for fracking evolves and becomes more widespread that review of risk would be a ongoing process. Is this the case? Will the EPA enlarge the scope of oversight, use more data from fracking operations, and require that tracers be used to better distinguish contamination due to fracking?
Reply »

Chuck (July 6, 2015 12:50 AM)
I've been working in Wyoming on a water reclamation project in the gas fields of the Moneta Basin and I've seen no evidence that fracking has contaminated any aquifers used for potable water supplies. Methinks the enviro-nutjobs are Chicken Littles.
Reply »

Chuck (July 6, 2015 12:52 AM)
Hey C&EN moderator! Don't publish my last comment and you risk having me cancel my subscription. I'm getting tired of the leftward bias of C&EN. Thank heaven Baum is gone.
Reply »