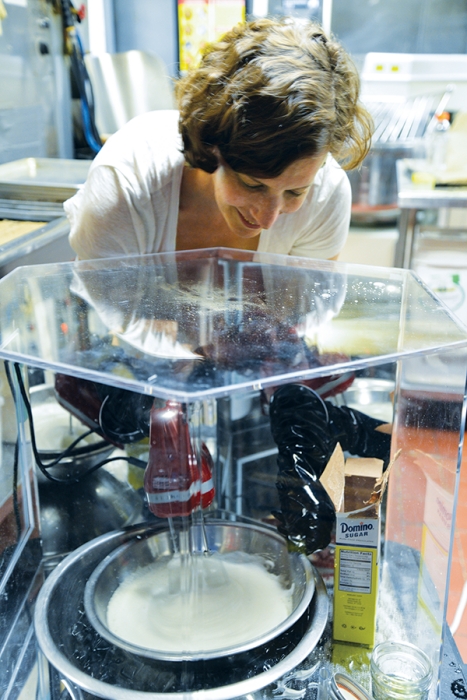 Edible air pollution was on the menu at the Ideas City street festival, held last month in New York City. In addition to nibbling on lobster rolls and artisanal popsicles, festivalgoers could sample meringues made with smog.

Meringue’s key component—egg-white foam whipped to stiff-peak stage—consists of about 90% air. “Thanks to egg whites, we’re able to harvest the air,” writes food science expert Harold McGee in his culinary tome “On Food and Cooking.”

McGee’s words inspired Zack Denfeld, artist and cofounder of the experimental food group the Center for Genomic Gastronomy, and Nicola Twilley, writer and author of the blog Edible Geography. Denfeld and Twilley recently teamed up to create a smog-meringue-making cart, which re-creates different urban atmospheres and harvests them with egg-white foam that’s then baked into meringues.

“By transforming the largely unconscious process of breathing to the conscious act of eating, the smog-tasting cart aims to create a visceral, thought-provoking interaction with the air all around us,” Twilley writes on her blog.

Twilley and Denfeld created three types of smog meringue for the street festival: a 1950s London pea souper, a sulfur- and particulate-heavy fog; a 1950s Los Angeles photochemical smog, created by the reactions between sunlight, NOx, and partially combusted hydrocarbons; and a present-day Atlanta smog, which is like the L.A. smog with the addition of terpenes from pine trees and decaying plant matter.

They gave away thousands of nickel-sized smog meringues at the festival. And how did they taste? “Initially you taste sugar. It’s sweet the way a meringue would taste,” Twilley tells Newscripts. Then there’s the decidedly less delectable aftertaste. “It felt like the inside of your mouth was dirty,” she adds.

The cart will be making another appearance in October at the Finnish Cultural Institute in New York—the group that sponsored the project.

It’s unlikely that smog meringues will emerge as a hot food trend, but another gas-liquid combo is becoming quite popular: nitrogen-infused coffee. Known as nitro coffee, the cold beverage is reminiscent of Guinness stout, with a head of cascading bubbles. 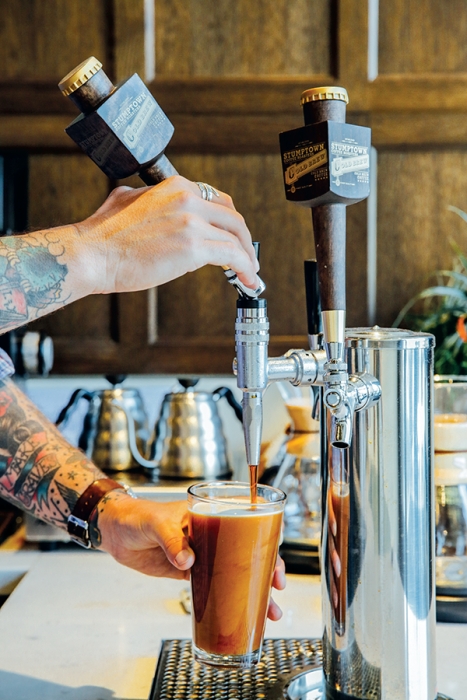 The gas-infused brew bubbled up a couple of years ago from a few different coffeemakers. Food scientist Nate Armbrust introduced it at Portland, Ore.-based Stumptown Coffee Roasters.

“In a nitro beer, you’ve got a large amount of nitrogen, but you’ve also got some carbon dioxide present from the natural by-products of the fermentation. With coffee, we don’t have the luxury of being able to use CO2 because once CO2 goes into solution, it becomes carbonic acid, and any addition of acid to coffee destroys the flavor and makes it unpalatable,” Armbrust tells Newscripts.

So Armbrust had to figure out how to get N2 into the coffee without the help of CO2. The secret, he says, is to make the tiniest N2 bubbles possible and force them into the coffee using precisely controlled pressure. When poured properly, Armbrust says, the nitro coffee “seems like there’s cream in it, just because of the texture and the mouthfeel. But it’s just black coffee and gas.”

If you’ve got a jones for the fizzy java but can’t find it on tap near you, don’t worry. Both Stumptown and Austin, Texas-based Cuvée Coffee are selling the stuff in widget-loaded cans.