Talks at the National Organic Chemistry Symposium cover photoredox catalysis and C–H activation, among other topics

Earlier this month, chemists convened at the University of Maryland, College Park, for the National Organic Chemistry Symposium (NOS) to discuss the art and science of synthesizing and characterizing organic molecules.

Held every two years, the meeting, sponsored by the American Chemical Society’s Division of Organic Chemistry, started in 1925, when it was held in Rochester, N.Y. It played a key role in the conception and start-up of the Journal of Organic Chemistry, noted Marisa C. Kozlowski of the University of Pennsylvania, primary organizer of the 2015 NOS. This year, “we had 560 attendees from 27 countries, six continents, 46 companies, seven government labs, and over 100 universities,” she said. The University of California, Davis, will host the 2017 NOS.

The first use of visible-light photoredox catalysis was in the late 1970s, but the field has taken off only recently, experiencing an explosive growth in popularity in the past five years. For example, Merck & Co., in Rahway, N.J., recently built a photoredox catalysis reactor that is equipped with light-emitting diodes and can produce at least 25 kg per day of products. 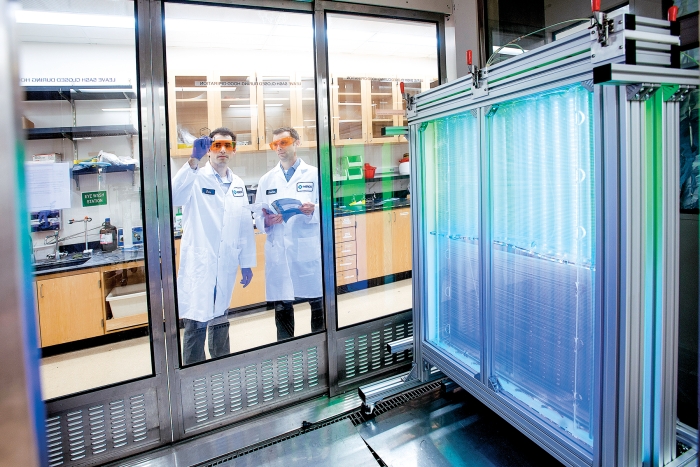 When activated by light, photoredox catalysts such as tris(bipyridyl)ruthenium(II) can catalyze both oxidation and reduction, sometimes in the same reaction sequence. “This makes it possible to invent new transformations that were not previously possible,” said David W. C. MacMillan of Princeton University in his talk at NOS.

MacMillan, his Princeton colleague Abigail G. Doyle, and coworkers recently developed a technique in which they used a photoredox catalyst and an organometallic catalyst to carry out difficult sp3-sp2 cross-coupling reactions. Such cross-couplings have typically been much more challenging to perform than connections between two unsaturated (sp2) carbon reactants. But in the new technique, called “synergistic catalysis,” two catalytic reaction sequences work together to form the tricky sp3-sp2 bonds.

The chemists used an iridium(III) photoredox catalyst to transform a carboxylic acid into an α-amino radical intermediate. By catalyzing oxidation and reduction in a single reaction cycle to create this hard-to-make intermediate, the photoredox catalyst allowed a nickel organometallic catalyst to then form the sp3-sp2 linkage between the radical and an aromatic halide, yielding a benzylic amine (Science 2014, DOI: 10.1126/science.1255525). The researchers believe synergistic catalysis will be useful for other types of sp3-sp2 couplings as well, and MacMillan noted that the technique is already being adopted in the pharmaceutical industry.

This reaction combines photoredox and organometallic catalysis to form a hard-to-make sp3-sp2 link between a carboxylic acid and an aromatic halide. Boc = tert-butyloxycarbonyl protecting group.

Amines are important components of many drugs and natural products, but chemists have few tools to add functionality to amines in their syntheses. For example, there are only a limited number of ways to convert simple aliphatic amines into more complex ones, said Matthew J. Gaunt of the University of Cambridge, in England, during his NOS talk.

Gaunt and coworkers have developed a new method to functionalize aliphatic carbon atoms in these amines using C–H bond activation. This general class of transformations takes an aliphatic C–H bond—such as one in a simple amine—and replaces it, in a single step, with an alternative linkage such as C–C, C–O, or C–N. Amines make this process tricky, in part because the amine group is sufficiently nucleophilic to deactivate catalysts. So existing methods for the C–H activation of aliphatic amines “require bespoke protecting groups or directing auxiliaries attached to the amine to attenuate its nucleophilicity,” Gaunt said. These extra steps lengthen syntheses and lower their yields. “There are very few examples of unprotected amines used in C–H activation,” Gaunt said.

The new method gets around the nucleophilicity problem with a more direct approach: The nitrogen atom of the amine functions as what Gaunt’s team calls a “native directing group” to position a metal catalyst in close proximity to the desired C–H bond in the compound. They then carry out a cyclometallation reaction, which activates the C–H bond and forms a bond between the carbon atom and a metal. Other molecules can then react with the carbon-metal bond to generate new products.

Gaunt’s team has recently developed a number of such reactions, including one in which amino alcohols undergo C–H arylation. They demonstrated how the method allowed them to make pharmaceutically relevant molecules by synthesizing the approved multiple sclerosis drug fingolimod (Gilenya), which is also in clinical trials for a number of other conditions.

The chemists hope eventually to develop this approach into a general strategy for the C–H activation of aliphatic amines. “Amines have often been a graduate student’s enemy,” Gaunt said. “There used to be a saying that went, ‘For every nitrogen in a molecule, you should add a year to your Ph.D.’”

At each NOS, the recipient of the Roger Adams Award in Organic Chemistry delivers a lecture. This year, Larry E. Overman of the University of California, Irvine, received the honor for the “design and synthesis of complex natural products of plant and marine origin.” 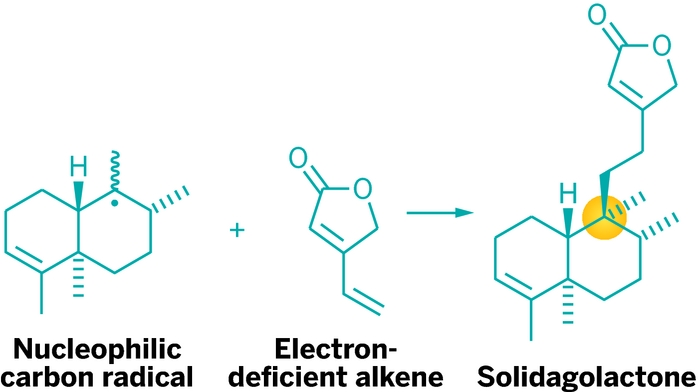 During the lecture, Overman discussed his group’s efforts to construct quaternary carbon stereocenters. These transformations, he said, remain a continuing challenge in the field of organic synthesis. In the past decade or so, chemists have made considerable progress in developing methods to synthesize these centers, with much of that headway having been made in Overman’s own lab.

Nevertheless, synthesizing these stereocenters is still not exactly a walk in the park. Overman noted that nearly all commercial drugs that have quaternary carbon stereocenters, such as Advair and OxyContin, are currently made by semisynthesis from natural product precursors that already have the stereocenters in place, thus avoiding the difficult process of forming them.

To make these centers more synthetically accessible, Overman and his coworkers have focused on a transformation chemists have long sought: forming a quaternary stereocenter by synthesizing a single bond between sp3-hybridized carbons in each of two highly functionalized organic fragments. In recent years, Overman and coworkers developed a way to forge such bonds by coupling nucleophilic carbon radicals with electron-deficient alkenes. They have demonstrated this approach by using it to make the diterpene aplyviolene —typically produced by a marine sponge. And in a study published earlier this year, they used it to make plant-based trans-clerodane diterpenoids such as solidagolactone (J. Am. Chem. Soc. 2015, DOI: 10.1021/ja512527s).

Besides discussing quaternary stereocenters, Overman also lamented a troubling trend in organic synthesis. “Unfortunately, we’re currently in a period where there is a lack of respect and funding for people who tackle complex structures, in spite of the many opportunities for meaningful discovery this area of chemical research currently provides,” Overman said. He believes that this is misguided—in part because the chemical insights gained in such studies are often much more important than being able to access the natural products themselves.

Chemists at Genentech, in South San Francisco, have been hard at work looking for a new drug to treat two autoimmune conditions, rheumatoid arthritis (RA) and lupus. At NOS, Wendy B. Young, vice president of small-molecule discovery chemistry, discussed their efforts at targeting an enzyme called Bruton’s tyrosine kinase (BTK).

BTK helps transmit cell signals that start at cell surface receptors and then go on to boost the responsiveness of the human immune system. Blocking BTK’s activity in immune system B cells and myeloid cells reduces those immune responses. Studies in rodents have suggested that BTK inhibitors might be effective treatments for RA and lupus.

A number of BTK inhibitors are currently in clinical trials. But Young noted that most of the disclosed ones are covalent inhibitors that also hit other kinases besides BTK, potentially causing undesired side effects. Genentech wants to avoid such off-target effects by developing a noncovalent inhibitor that is highly selective for BTK.

A family of molecules the company is investigating interacts with an inducible binding site on BTK. It’s called inducible because a tyrosine motif that plays a key role in the binding interaction moves into the site from another location in the protein only when the compounds are present. Young said that going after this site could make inhibitors selective for BTK since, “to the best of our knowledge, no structurally related kinases undergo this structural change.” 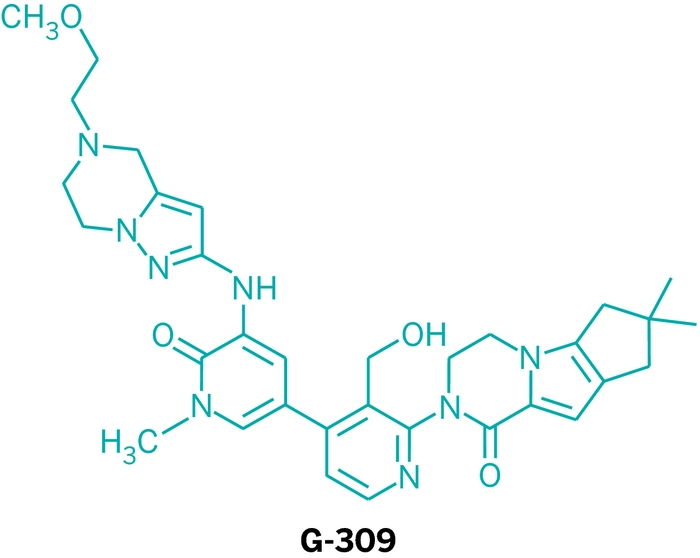 The Genentech team started with a lead compound that bound to the inducible site and showed good selectivity for BTK but lacked other important druglike properties. They improved its potency by adding a gem-dimethyl group that enhanced binding affinity, but the resulting product also inhibited cytochrome P450, an undesirable property that can cause unsafe interactions with other drugs. They blocked cytochrome P450 inhibition by adding an alkyl substituent to a pyrimidine group, but that, in turn, lowered potency. The team then restored high potency by replacing the pyrimidine entirely with a five-membered heterocyclic ring.

With further optimizations, the team arrived at a pyrazolopiperazine designated G-309, which Genentech has advanced into preclinical development for potential treatment of RA and lupus. “The program has had its ups and downs along the way, with many lessons learned, and I am very proud of the work the team has accomplished,” Young said.