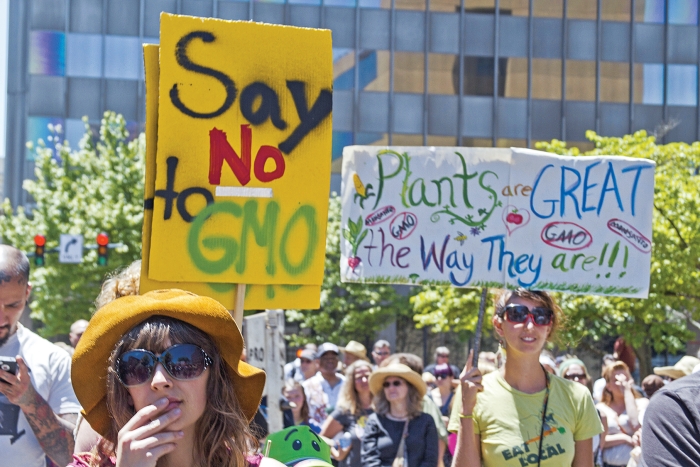 Credit: J. Bicking/Shutterstock.com
Many consumers in the U.S. have lost confidence in the safety of genetically modified foods.

If your dog gets into your neighbor’s chicken coop and destroys the flock, you are responsible for the damages. If you spray-paint a fence and the paint drifts onto a neighbor’s car, you are responsible for repairing the vehicle. Likewise, if your child throws a baseball through your neighbor’s window, you are potentially liable for the damage. But if pollen from your genetically modified crops drifts onto an adjacent organic farm, that neighbor bears sole responsibility for keeping it out.

“It’s not a level playing field,” says Dave Campbell, a certified organic farmer in northern Illinois. Campbell had four loads of corn rejected for the organic food market earlier this year because genetically modified organisms (GMOs) were detected in them. To be certified as organic, foods must not contain GMOs.

The premium price Campbell expected for his organic corn “was denied due to someone else’s product that ran onto my property,” he told federal officials at a recent meeting hosted by the Department of Agriculture. Campbell believes he should be compensated for his losses, caused by what he calls “genetic trespassing.” He pointed out that he has a 30-foot border around his farm—land that he forgoes cultivating—to help keep GMOs from nearby fields out of his crops.

Contamination of nonbioengineered crops with GMOs is one of many problems that the federal regulatory system does not address, say environmental groups and organic farmers who have long urged federal agencies to boost testing and oversight after GMO products hit the market. In fact, once a GMO crop is approved in the U.S., it can be marketed and planted with no further scrutiny, including monitoring for weed resistance and other unintended environmental or human health effects.

But genetically modified seed producers, backed by large chemical companies, maintain that the regulatory system for GMOs in the U.S. is working. Regulations should be relaxed, not strengthened, they say, pointing out that little evidence has emerged since the first GMO crops were planted more than 20 years ago to suggest that the technology poses any risks to human health or the environment.

Seed producers and large-scale grower groups whose crops are grown as commodities contend that farmers who make investments to sell their crops for a premium, such as by having them certified as organic, are responsible for maintaining that added value. They also argue that additional regulations and scrutiny of GMO crops will stifle innovation, delay new products from entering the market, and increase production costs for farmers.

The regulatory landscape for GMO crops in the U.S. is complex. Several federal agencies have a hand in the approval process. USDA ensures that GMO products are not plant pests. The Environmental Protection Agency reviews the safety of GMO crops when they incorporate a pesticide, such as the insecticide Bacillus thuringiensis (Bt) endotoxin. The Food & Drug Administration, meanwhile, has jurisdiction over the safety of GMOs in foods.

This complex regulatory system has made it difficult for consumers to understand how GMOs are evaluated, say government officials. They blame this multifaceted federal oversight for a drop in public confidence about the safety of GMO foods and the groundswell of opposition to the technology.

The Obama Administration is acting to help boost public confidence in GMO foods and other biotechnology products and to prepare federal agencies to review future biotech products on the horizon. Earlier this month, the White House directed the agencies with jurisdiction over biotechnology to overhaul the regulatory system. Called the Coordinated Framework for Regulation of Biotechnology, this system was put in place in 1986 and last updated in 1992.

“Advances in science and technology since 1992 have been altering the product landscape,” White House Office of Science & Technology Policy officials wrote in a blog post announcing the new federal effort. They stressed the importance of ensuring that the federal regulatory system efficiently assesses any risks associated with the future products of biotechnology.

The directive gives the three agencies one year to specify which types of biotech products are under their purview. For products that fall within the jurisdiction of more than one part of the government, each agency must clarify its particular role and how it connects to the activity of other federal regulators. The agencies must be on the alert for emerging biotech products and develop a long-term strategy to assess associated risks.

Even before the White House announcement, USDA began seeking input from environmental and public health groups, farmers, pesticide companies, seed producers, and other stakeholders about how to revamp the way it approves GMO crops.

“The current regulatory system for genetically engineered plants is broken,” Genna Reed, a researcher with the environmental group Food & Water Watch (FWW), said at one of three public meetings USDA held in May.

Organic farmers are spending on average $6,500 each year to create buffers between genetically altered crops and unmodified crops and to test for the presence of unwanted bioengineered traits, according to a survey conducted in late 2013 by FWW.

One out of three farmers who responded to the FWW survey reported they have had GMO contamination. “Of those, about one-third or half of them had some products rejected by a buyer for contamination,” said Patty Lovera, assistant director of FWW. “One farmer in Illinois reported that most of what he grew in 2013 was rejected for the organic food market, and that resulted in a $3.50 loss per bushel on 105,000 bushels contracted.”

Lovera and others are urging USDA to collect more data to determine the extent to which GMO traits spread to nonmodified crops. “The new regulatory system has to include contamination prevention measures,” Lovera said, as well as some way to compensate farmers for losses incurred by GMO contamination. A key element in these strategies, she said, involves monitoring the spread of GMO traits in field trials.

In contrast, biotech companies, represented by the Biotechnology Industry Organization (BIO), say monitoring of field trials should focus solely on the risk of the product being tested.

The Department of Agriculture “has overseen tens of thousands of field trials, hundreds of thousands of genetic constructs, and completed in-depth risk assessments on more than 100 deregulated products,” said Clint Nesbitt, BIO’s director of regulatory affairs for food and agriculture. USDA has never identified a single GMO to be a plant pest, he noted. “This has resulted in regulatory oversight that has grown to be vastly disproportionate to the risks,” he said.

Leon Corzine, a fifth-generation family farmer in central Illinois, agrees that GMO regulation has gone overboard. Over the past 20 years, “we have nearly doubled our productivity. We also have increased our soil health. We’ve reduced runoff,” Corzine told USDA officials in May. Plus, his farming operation now uses smaller amounts of toxic agricultural chemicals. He agreed that new technologies need to be reviewed for safety, but he emphasized that such reviews need to be done in a timely manner.

The White House plans to organize three public meetings over the next year to help sort through all of the thorny issues swirling around GMO crops and to guide federal agencies toward developing a new system for overseeing biotechnology. The first meeting will be held in Washington, D.C., this fall.