by Sandhya Sekar, special to C&EN

Bees, wasps, and ants typically live in groups consisting of one egg-laying individual—the queen—and many sterile workers. Among bees, the queen maintains status by secreting a bouquet of chemicals. Other insect queens are far less subtle; they simply beat their nest mates into submission. 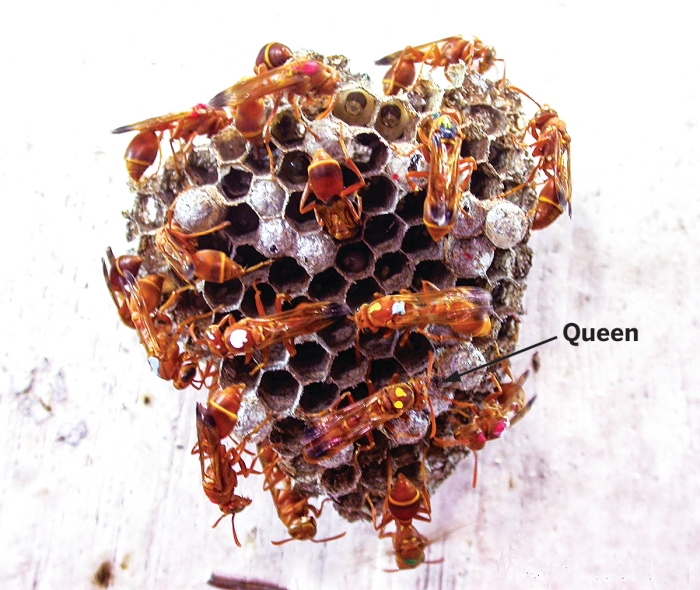 Most wasp queens belong to the brute-force category. But Ropalidia marginata, a wasp from southern India, has queens that behave like both wasps and bees: aggressive at first and then docile. How these queens keep their crowns has been puzzling Raghavendra Gadagkar, a professor of ecology and evolutionary biology, and his students at the Centre for Ecological Sciences in the Indian Institute of Science, Bangalore. They have found that on the road to royalty, an ascending R. marginata queen’s initial aggression is replaced by a bouquet of aromas that silences all competition. These and other studies underscore social insects’ ability to manipulate the biosynthesis of relatively simple molecules to enable complex community functions.

Gadagkar’s group has shown that a future R. marginata queen uses aggression only when she is still workerlike, with underdeveloped ovaries. As her ovaries develop, a gland in her abdomen, called the Dufour’s gland, starts secreting chemicals different from those of a worker. Once ovary development is complete, she secretes chemicals that identify her as the queen, and she stops being a bully.

Using gas chromatography/mass spectrometric analyses, Mitra and Gadagkar showed that the secretions of queens and workers are different (Naturwissenschaften 2011, DOI: 10.1007/s00114-010-0749-9). And they found that the Dufour’s gland profile of the potential queen changes gradually from that of a worker to that of a queen.

When a colony loses its queen, one worker becomes hyperaggressive and eventually rules as the new queen. The researchers identify this worker as the “potential queen.” The onset of hyperaggression coincides with the worker’s ovaries starting to develop (Ethology 2012, DOI: 10.1111/j.1439-0310.2012.02059.x).

“The overall Dufour’s gland composition correlates with the state of fertility,” Mitra says. In parallel experiments, Mitra and the team removed a queen from her colony, allowing a potential queen to begin ascending to the throne. Then they added a mashed up extract of the real queen’s Dufour’s gland to the colony, which caused the potential queen to revert to worker behavior. (J. Insect Physiol. 2011, DOI: 10.1016/j.jinsphys.2010.11.014). This means the gland contains chemical cues other wasps recognize as coming from a queen, Mitra says.

These cues are mixtures of linear and methyl-branched C21–C33 hydrocarbons. One such mixture might broadcast the presence of a queen, says Christina Grozinger, an entomology professor at Pennsylvania State University. Another mixture, when expressed in a specific place, such as the cuticle, might signal other information, such as membership in a colony.

A recent study shows that wasps, bees, and some ants all use nonvolatile saturated hydrocarbons as “queen pheromones” in different relative proportion (Science 2014, DOI: 10.1126/science.1244899). Consistent with this finding, the R. marginata queen secretes a complex mixture of long-chain alkanes. No single compound is specific to the queen or workers. “The only consistent difference I have found,” Mitra says, “is that queens have a lower relative proportion than workers of the first four peaks—heneicosane, 11-methylheneicosane, tricosane, and 11-methyltricosane.”

What determines which worker can be queen is not clear, and identifying the queen-to-be is a puzzle. “Predicting the next queen before the loss of the previous queen remains a major challenge of our research,” Gadagkar says. “Our failure so far is at once a source of embarrassment for us and a source of admiration for our wasps.”

Recent work has shown that Dufour’s gland compounds are also in the cuticle of all R. marginata individuals. Mitra believes this means that some combination of the compounds from the Dufour’s gland is transported to the cuticle. Cuticular hydrocarbons are perceived by other wasps through their antennae, and they enable colony inhabitants to discriminate between legitimate members and intruders (Anim. Behav. 2014, DOI: 10.1016/j.anbehav.2013.11.017).

“Not much is known about the mechanisms of chemosensation in wasps, bees, and ants,” Mitra says. Because each sense organ on their antennae contains more than 80 neurons, these insects can perceive slight changes in the relative composition of a complex mixture of 60-plus compounds, he explains. Such changes may be crucial to social insects’ well-being and survival but become obvious to humans only through statistical analysis.

“The question of how altruism, empathy, and social behaviors are generated has long fascinated people,” Grozinger says. The studies of R. marginata queens “provide us with clues about how these complex behaviors evolved in insect societies, which display some of the most complex and intricate social behaviors in the world,” she adds.

Epigenetics
Video: The chemistry driving a fish’s sex change
Biochemistry
When good bees go bad﻿
Biological Chemistry
What will it take to find a human pheromone?
Share X
To send an e-mail to multiple recipients, separate e-mail addresses with a comma, semicolon, or both.
Title: Ascension To Queendom
Author: Sandhya Sekar, special to C&EN
Chemical & Engineering News will not share your email address with any other person or company.