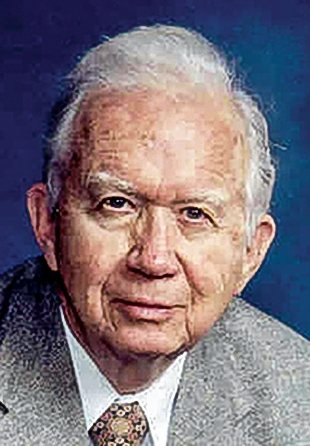 Raised in Homerville, Ga., Wooten earned a B.S. in chemistry from the University of Georgia in 1943. He then served in the Army, including as a member of its Mars Task Force, an infantry combat unit stationed in mainland Asia during World War II.

After the war, Wooten earned his Ph.D. in organic chemistry from the University of North Carolina, Chapel Hill, in 1950.

Wooten then joined Eastman Kodak, working briefly in its Rochester, N.Y., offices before moving to its Tennessee Eastman arm, in Kingsport, where he would remain for 37 years. He discovered Verel, a modacrylic fiber, and was subsequently promoted to manage the company’s Polymer Research Division. Under this leadership, his team of 65 chemists discovered numerous useful polymers. Wooten held 25 patents and published 14 polymer chemistry articles during his career.

After retiring from the company in 1986, Wooten returned to UNC Chapel Hill as an adjunct professor.

Additionally, Wooten served on industrial advisory boards for several universities and was a visiting professor at Illinois State University, Normal. He was chair of the Gordon Research Conference on Polymers in 1976.

Wooten was an emeritus member of ACS, joining in 1948 and serving as chair of the polymers division. He was also a member of Sigma Xi and the American Association for the Advancement of Science.

A member of the Methodist Church for the majority of his life, Wooten was most recently a member of the Westminster Presbyterian Church in Greensboro, N.C.

His wife, Nancy, whom he married in 1949, predeceased him. He is survived by his daughters, Jane, Ellen Vail, and Martha Adrian; four grandchildren; and one great-grandchild.