A Conversation With Martin Burke 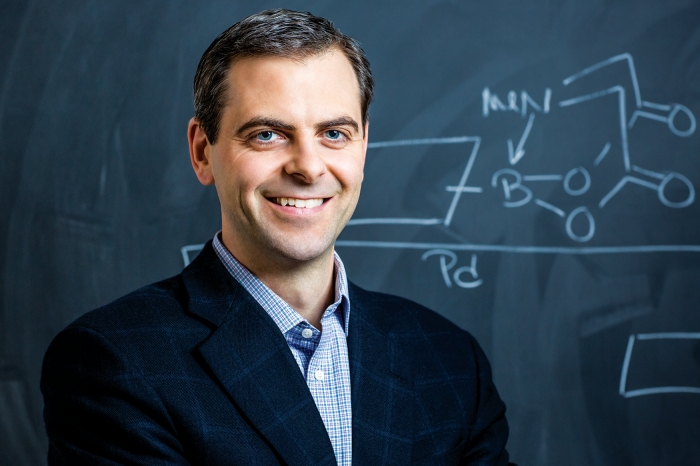 Martin D. Burke, a professor of chemistry at the University of Illinois, Urbana-Champaign, made waves in the synthetic chemistry and chemical biology communities earlier this year with a Science paper describing a machine that automates small-molecule synthesis (C&EN, March 16, page 3). The device represents a first step toward an instrument analogous to a peptide or oligonucleotide synthesizer, allowing chemists and other scientists greater access to complex natural products. Sarah Webb recently spoke with Burke about the synthesizer and his motivations for bringing synthesis to nonchemists.

How did an M.D./Ph.D. student become a synthetic chemist?

I was a premedical student at Johns Hopkins University fully intending to become a clinician. I took organic chemistry for the first time as a freshman, and I was absolutely blown away—I realized that there was something inherently exciting and powerful about it.

I went to Harvard University as an M.D./Ph.D. student, largely in great conflict, not knowing any longer what I wanted to do because I was very interested in human health, but I’d found this new passion for chemistry and for thinking about synthesis.

I was running back and forth between Stuart Schreiber’s chemistry lab, where I did my Ph.D., and interacting with patients in the hospital. Particularly I remember a young woman with cystic fibrosis. Despite all we understood about her disease, we could do little to fix it because the disease involves loss of a protein. So I became fascinated by this question: Could we replace this missing protein with a small-molecule drug that acts like a prosthetic on the molecular scale?

Where did the idea for a small-molecule synthesizer come from?

From interacting with this patient, I became deeply interested in trying to replace the missing protein in cystic fibrosis—a chloride channel. Amphotericin—a natural molecule that forms ion channels in cells—represented a head start. I dove deep in the literature, thinking about how to make that molecule.

At the same time, I used to get together for drinks with my very good friend Rahul M. Kohli (now a professor at the University of Pennsylvania), who was studying cyclic peptides. And, man, he was cranking. It was clear why: He had this peptide synthesizer. I got jealous. So I asked the question: Why can’t we do this with small molecules? I spent many hours running around the Charles River thinking about the question, and I got really fired up about the possibility that maybe we could.

Nature makes most small molecules in a modular way. She takes a couple of building blocks and iteratively stitches them together. Therefore, there is inherent modularity in small molecules that remains largely untapped by chemists.

How will this synthesizer help nonchemists?

Think about the impact small molecules have already had on society: drugs, probes of biological systems, organic electronics for solar cells and light-emitting diodes, and nanoscale devices. Small molecules are going to form critical components of many future technologies. Until now, synthesis has represented an important bottleneck in gaining access to all of that function. If we can take a powerful technology that has been in the hands of a few and bring it to everyone, we could foster creative, out-of-the-box thinking. The idea that a biologist or physicist could go to a website, dial up a molecule, and have it printed and shipped could transform science, medicine, and technology.

We plan to pursue the molecular prosthetics idea. We are convinced that small molecules with proteinlike functions could help patients whose disease is caused by a missing protein. There are hints from our results that have convinced us that this is a huge opportunity.

Will there be a day when a machine can do almost all of our chemical synthesis?

I certainly foresee a future in which a machine can do a lot. Certainly the more that we can do in systematic, automated ways, the more we can focus on frontier experiments. With DNA microarrays, you can look at the expression of every single gene in the human genome in a single experiment. And the reason that we can do that experiment is that a machine synthesizes oligonucleotides corresponding to every gene in the human genome and then prints them on a glass microscope slide. If synthesis were no longer the bottleneck for small molecules, chemists could explore the chemical space represented by these large and complex natural products. It’s incredibly exciting to think about what we could do.

Sarah Webb is a freelance writer. A longer version of this interview first appeared in ACS Central Science: http://cenm.ag/burke.